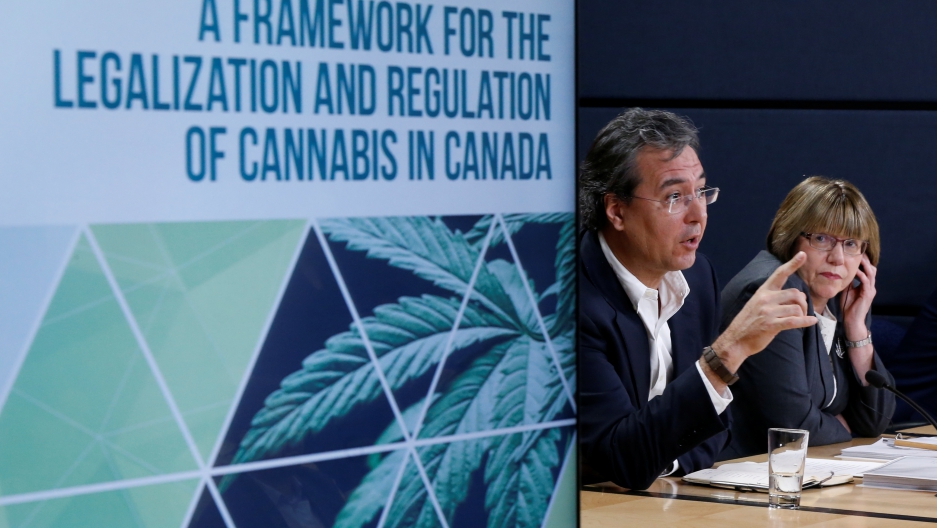 Canadian police on Thursday raided nearly a dozen stores selling marijuana in several cities, after arresting a prominent pot activist and his wife.

Search warrants were executed at 11 Cannabis Culture stores in Toronto, Hamilton, Ottawa and Vancouver, according to a statement.

On Wednesday night self-proclaimed "Prince of Pot" Marc Emery and his wife Jodie, who own the stores, were arrested as they waited at the Toronto airport to board a flight to Spain to attend a festival.

The coordinated police operation came as the government reaffirmed its commitment to legalize recreational use of marijuana, but asked for patience.

"We (will be) the first OECD country in the world to do this, so we want to make sure that this is done properly," Health Minister Jane Philpott said.

"And people need to recognize it will take some time."

Medical marijuana use has been regulated in Canada since 2001. But cannabis remains a controlled drug.

Over the last two years, dozens of storefronts have opened in cities across Canada to sell pot, operating in what they call a "grey area" ahead of legalization as they vie for market share.

Officials have been cracking down, but the shops often open up mere days after being raided and closed.

Marc Emery has been arrested a number of times over his pro-cannabis activism.

He was released from a US prison in 2014 after serving a nearly five year sentence for selling marijuana seeds by mail to US customers from his Vancouver dispensary.