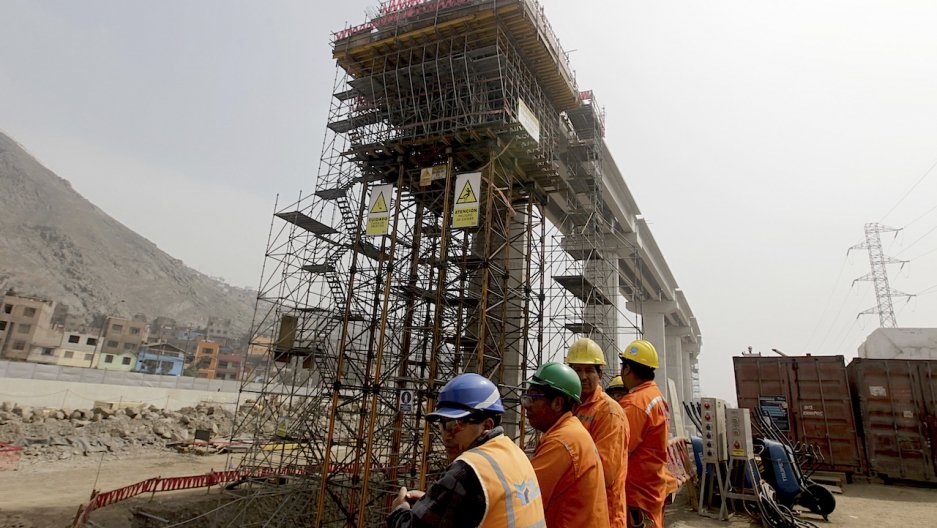 Workers rest at a Lima construction site in 2013.

It is a truth almost universally acknowledged that a woman will avoid walking by a construction site if she can, especially if she is on her own. If a woman dares to defy that rule, there's a good chance she will be on the receiving end of unpleasant, rude comments or whistling by the men working at the site.

But there's still a place for hope.

In Miraflores, a traditional middle-class neighborhood in Peru's capital, Lima, where construction sites abound, a group of construction workers decided to show they think and act differently. And the response has been positive.

“At this construction site, we don't whistle at women and we are against sexual street harrassment,” the sign reads.

An image of their sign was posted on Facebook, on the fanpage Ni una menos Perú (Not one woman less Peru), and has so far been shared over 300 times and has 3,300 likes; the comments on the platform have mostly been positive:

Lu Necochea Great start… wow, it's encouraging not having to endure any more harassment. Good initiative.

Gisella Laynes Good. I applaud that because I won't be afraid when I walk by these sites…

Adriana Lucia I love it! I remember we always had to cross the street just to avoid walking by a construction site.

Some men posted messages trying to explain the phenomenon:

Tito Surf Rock Construction workers – most of whom come from dysfunctional homes (most of the time it's not their fault but their irresponsible parents’). […] disrespect women in general and forget we all come from a woman (mother).

Others were less sympathetic:

Eduardo Antonio Cesti LOL! But when women are the ones who harass, no one says a single word.

Liler Vasquez LOL! Wait and see, it will soon be forbidden to watch women as they walk down the street.

Global Voices had a brief talk with Juan Enrique Huamaní, who is in charge of security issues at the construction site, and he told us: "Here at the construction site, we get lectured about how to behave ourselves. This makes us aware that we all have mothers, daughters, sisters, and no one here would be pleased to know that they have to endure obscenities merely by dint of walking by the street. That's why we want to raise awareness and let everybody know [how we feel and act]."

This beacon of light comes at a hard moment for women's rights in Peru. One of the latest high-profile gender violence cases happened on Feb. 27, 2017, when a 27-year-old lawyer and mother of two, Evelyn Corahua Fabian, was strangled to death in her house by her former partner. A month earlier, she reported that he tried to strangle her, but the authorities dismissed her report.

But while the country still struggles with gender-related violence, the construction workers in Miraflores are modeling an example of respect.