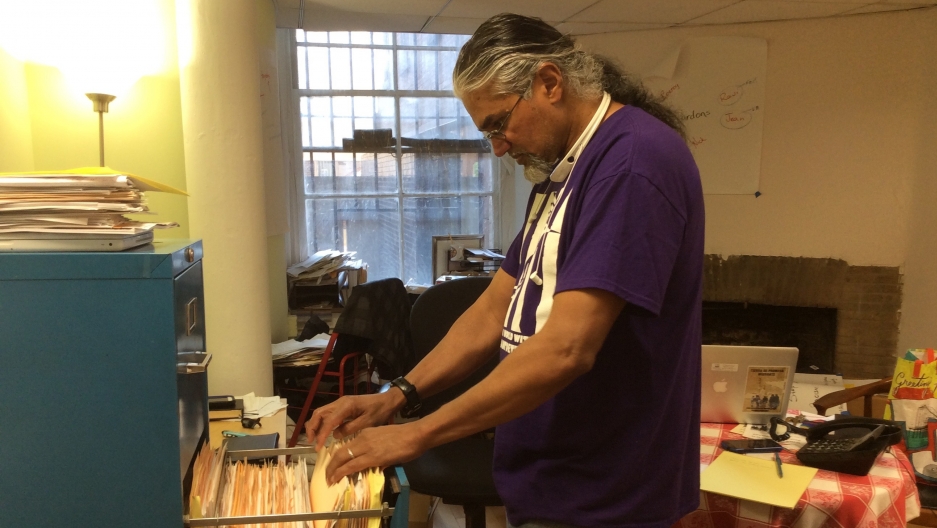 Ravi Ragbir in his office at Judson Memorial Church, in New York City, the week before he is scheduled to appear in front of immigration agents on March 9, 2017. For years, the government used its discretion not to deport him while he has a pending legal case. He's worried that this time, he'll be sent away from his home.

Ravi Ragbir spent a big part of his morning one day last week asking people who were filing into a New York City federal building a simple question.

He stood near the Worth Street entrance of the Jacob K. Javits federal office building, in lower Manhattan, where the New York field office of Immigration and Customs Enforcement (ICE) is located. It’s the same building that may swallow Ragbir up on March 9.

He’s an immigrant from Trinidad who knows the inner workings of the detention and courts systems where he’s been trying to reverse an order for his deportation since 2006. He chose visibility and to check in regularly with the government, which up to now has chosen not to deport him just yet.

His next appointment is on Thursday, though, and he does not know what will happen — no one does. He could be separated from his wife and adult daughter, both of whom are US citizens. 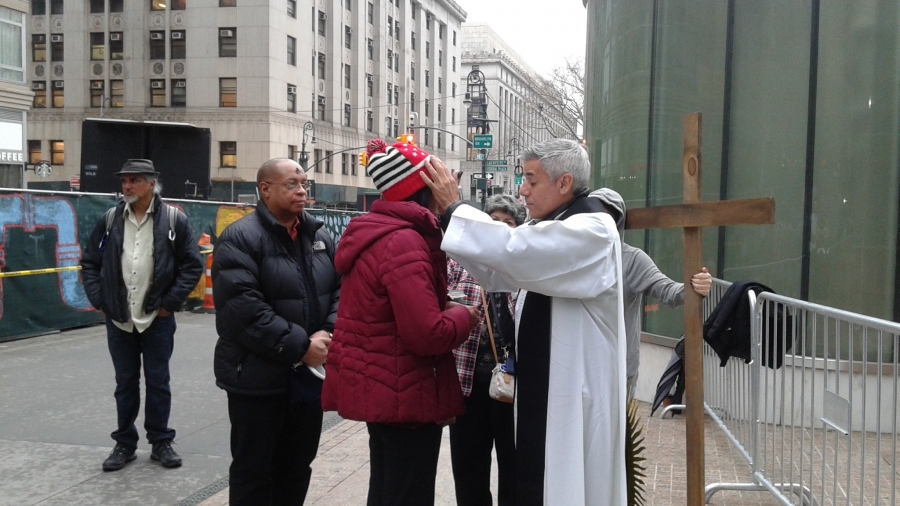 Father Fabian Arias of St. Peter's Church imposes ashes on passersby on Ash Wednesday on Worth Street, the side entrance to the government buiding that hosts local immigration offices in Manhattan. He is part of a program to accompany immigrants to their appointments with federal agents.

But at that entryway, Ragbir assigned well-trained volunteers to help heavy-hearted immigrants whom he met on the sidewalk. He did not want them to go upstairs alone, to appointments with immigration agents that could end in their deportations. Meanwhile, Father Fabian Arias stood with his statue of the Madonna, ready to provide ashes to passersby, building employees and deportation officers.

That’s what providing sanctuary means to Ragbir, the executive director of the New Sanctuary Coalition of New York City, a national interfaith network that fights for the rights of undocumented migrants and their families. For them, sanctuary is not just about a city’s policies and battles with the federal government’s agenda. It’s about communities providing direct support and witnessing the government’s actions for each other. He's on a mission to scale up his volunteer corps now that Trump is pursuing his immigration agenda.

“People are afraid,” he says. “[Immigrants] who have to go to these check-ins, or to court, are caught between a monster and a beast. No matter what they do, they’ll be chewed up.”

He refers to the case of Guadalupe García de Rayos, a mother in Phoenix who was removed from the US in February after a routine visit with immigration officials. Juan Carlos Fomperosa Garcia, a single father also in Phoenix, was deported under similar circumstances last week. After García's case, a mother of four in Denver, Jeanette Vizguerra, took sanctuary inside a church instead of keeping her appointment with ICE.

The uncertainty of what will happen during check-ins is real. But if undocumented immigrants don't go to their appointments, they become fugitives. And Ragbir says that would make them law enforcement targets for the rest of their lives.

He’s put his faith in the prosecutorial discretion of ICE. It’s in their power to make case-by-case decisions about who gets to stay and who has to go. It’s how Ragbir himself has stayed in the country since 2006, despite a removal order against him.

“Obama deported more than 3 million people. He wasn’t liberal,” says Ragbir. “But an opportunity might have been there for people’s rights to be upheld.”

Some 3 million people were removed from the US during the Obama administration, with a focus on undocumented immigrants who recently arrived and those who had criminal records. His administration was also marked by a slowdown in the number of people crossing the southern border, according to a report by the Migration Policy Institute.

Ragbir doubts that the current harsh anti-immigrant discourse, the raids and what’s already happened at check-ins signal that the Trump administration will allow people the chance to defend themselves.

Ragbir runs a program for immigrants with scheduled check-ins from his office at the Judson Memorial Church, a member of his coalition. He teaches faith leaders and private citizens how to quietly provide comfort to embattled immigrants during hearings, while bearing witness to ICE practices. Before the new administration came along, he had nearly 600 volunteers. But the outpouring of support since the November election has filled three training sessions per week for the past five weeks. They say about 100 people show up per training.

His goal is to help keep migrants from going underground.

“The fear of living as a fugitive is very high,” says Ragbir. “People [would] rather not do that. They also want to show that they’re willing to do whatever is needed to live in this country, to be part of the system.”

Ragbir himself will be an early test case for this program under the Trump administration. His annual check-in is scheduled for this Thursday at the federal building in downtown Manhattan where he brought his volunteers last week, and countless times before. This time, he plans to take about 15 people — faith leaders, community members and elected officials — into 26 Federal Plaza with him.

“Yes, I’ll be there,” he says. “But I don’t know if they’ll handcuff me. We’ve seen the impact of this administration.”

Ragbir’s entanglements with the US immigration system began in 2001, seven years after he immigrated to the US with a green card. That means he came as a legal permanent resident. He was convicted for wire fraud after the mortgage company that he worked for was investigated for fraudulent loan applications. He served a five-year jail sentence, then spent two years in immigration detention while he was in deportation proceedings.

Alina Das is a professor at New York University School of Law and is representing Ragbir. “Because his conviction is considered an ‘aggravated felony’,” she says, “he wasn’t given a chance to cancel his deportation order.”

Ragbir was released from immigration detention in 2008 under very onerous conditions of supervision, which included wearing an ankle monitor and reporting to immigration officials three times per week. It was then that he immersed himself in community work and was eventually hired to lead the New Sanctuary Coalition of New York City. He is seeking to vacate his criminal conviction, saying he was denied due process and proper laws were not followed. If successful, Ragbir could seek to have his lawful permanent residency restored.

Follow: Keep up with Ravi Ragbir as he navigates the immigration system.

In 2011, ICE granted him a stay of removal; officials exercised their discretion to not deport Ragbir, who was by then known both for his advocacy and his contributions to the immigrant community. He now checks in with immigration officials much less frequently.

But his legal challenge to his criminal conviction won’t be heard in time for his next scheduled check-in and he's not sure if immigration agents in the Trump administration will give him that chance before deporting him to Trinidad.

The day after Trump was elected, Ragbir’s wife, Amy Gottlieb, says she feared the worst.

“I was so devastated on so many levels,” she says. “I knew that this new wave of anti-immigrant sentiment and anti-immigrant policies were going to impact us directly.”

She too works for a nonprofit, the social justice organization American Friends Service Committee. And she has accompanied Ragbir to all of his previous check-ins.

This Thursday, she will be one person in a much larger group.

“Ravi will walk in with people who know him and his work,” says Father Juan Carlos Ruiz, who co-founded the New Sanctuary Coalition Movement. Ruiz will remain outside to hold prayers and organize participants in civil protest.

“There are a lot of people who don’t have Ravi’s resources,” says Ruiz. “It’s really about the risk that too many immigrants face at [these check-ins], even after they’ve turned their lives around, they’ve formed families, they’ve paid their debts to society.”

That’s why both Ragbir and the New Sanctuary Coalition of New York City are scaling up the accompaniment program. They’ve been raising not only the number of volunteers, but also the profile of people they recruit to match name recognition with high risk cases like Ragbir’s. Ragbir declined to say which elected officials will be going to his appointment.

According to Ruiz, they have attracted more clergy members and community leaders willing to lend a hand and spread the word.

ICE has not published a specific policy or statement about immigrants who bring supporters to their appointments. PRI has contacted ICE several times for comment on its accompaniment policies, but the agency has not responded.

Ira Mehlman, the media director of the Federation for American Immigration Reform, which advocates for fewer immigrants in the US, says he has “no particular objection to people having a friend accompany them to an ICE hearing, [if the agency] has no policy against it.”

Kyle Barron is a law student at New York University who collaborated with Ragbir for three years and has accompanied many people to the ICE field office in New York City. “It’s very much like the Social Security office, except for a palpable sense of fear and anxiety,” she says. “If they see that someone is part of a community, that they’re not alone, we have to think that it affects their decision.”

“We find it to be a great tool, as our folks don't want to go ‘underground,’ but they do fear ICE,” she says. “It is completely understandable why they would, especially in this new era where ICE is picking up women from court while filing documents for domestic violence and folks are being picked up outside of church.”

In El Paso, Texas, in February, immigration agents arrested an undocumented immigrant in court who had just won a protective order in a domestic violence case. Some attorneys say this has had a chilling effect on witnesses and victims of domestic violence who have become unwilling to testify. ICE agents also conducted a raid outside of a church homeless shelter in Virginia in early February.

Barron says that when people are given a reprieve from the threat of deportation, it’s transformative. “It’s one of the most incredible things to recognize what people go through.”

That’s the sense of relief that Gottlieb hopes to see on her husband’s face Thursday.

“We’ve been pushing and struggling for humane immigration for so many years. Frankly we have not been successful at all, but the way that a person lives while feeling beaten down by the system — it’s exhausting.”

Still, Ragbir will be at the federal building at 10:00 am on Thursday. And he hopes he’ll be home with his family that night.