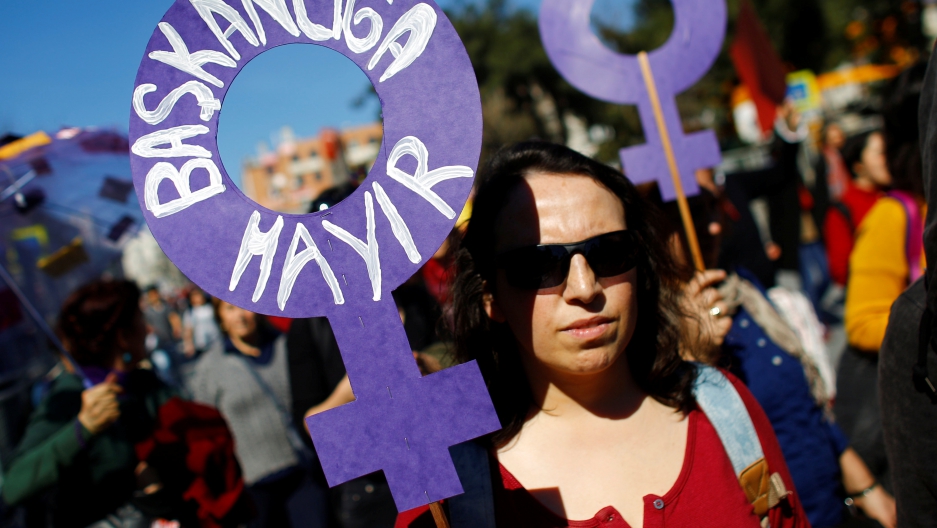 A demonstrator holds a placard that reads: "No to Presidency" during a Women's Day rally in Istanbul, Turkey, March 5, 2017.

Waving Turkish flags, women shouted "Of course, Yes!" ahead of the April 16 vote on constitutional changes that would give Turkey an executive presidency similar to political systems in France or the United States.

Erdogan's ruling Justice and Development Party (AKP) is running the "Yes" campaign, saying the changes would bring political stability. The vote is widely seen as a referendum on Erdogan himself because the proposed plan could see him stay in power until 2029.

Opponents, however, say the changes that would grant sweeping new powers to the head of state would make parliament dysfunctional and promote a one-man model.

Pro-government supporters gathered at the 12,500 capacity sports complex known as Abdi Ipekci Arena outside Istanbul's ancient city walls, with the campaign theme: "Yes! If women are there, democracy is there."

Erdogan himself, together with his wife Emine, showed up for the event organized by the pro-government Women and Democracy Association (KADEM), whose deputy chair is Erdogan's younger daughter Sumeyye Erdogan Bayraktar.

"For the survival of our country, it is a very important decision," said AKP supporter Ayse Gurcan, who came to the rally from Erzurum province in eastern Turkey.

"We must make our choice in a healthy way and I believe that everyone will say 'Yes,'" she said

Another woman, Zehra Ferahtay, said the approval of constitutional changes would unify Turkey, especially after the failed coup attempt in July to oust Erdogan's government.

"Yes, I support the presidential system and especially after July 15, we must be more united and together for this country," she said.

Saliha Mantar, wearing an Islamic headscarf, said women had been granted more rights since Erdogan came to power as prime minister in 2003 and as president in 2014.

"We, women, promise to be always behind our leader," she said, referring to Erdogan.

Critics, however, argue if the constitutional plan is approved, Turkey would lurch toward authoritarianism, saying it would not be a system based on checks and balances.

In Bakirkoy, another Istanbul district, women took to streets for the "No" campaign in opposition to the constitutional changes.

Around 5,000 women unfurled banners with such messages as, "For our life and our rights, our decision is No."

Both rallies in Istanbul come ahead of the March 8 Women's Day.

"A 'Yes' vote would prove disastrous for the entire country and for women," 23-year-old Buse Sogutlu told AFP.

"Still, we will continue to take to the streets and resist," she said.

Another protester, Semra Aslan, predicted that a "Yes" or "No" vote emerging from the ballot box would not bring any significant change other than emboldening AKP's domination.

"We are already in a state of emergency but we will not be silent," she said.

Ankara imposed a state of emergency in the wake of the botched July coup attempt, which critics say has been used for a massive clampdown on Erdogan's opponents and not just suspected coup plotters.

Germany on watch; Erdogan lashes out

Meanwhile, Erdogan lashed out Sunday at Germany for blocking several rallies there ahead of the April vote in Turkey.

"Your practices are not different from the Nazi practices of the past," Erdogan told the women's rally in Istanbul. "I thought it's been a long time since Germany left [Nazi practices]. We are mistaken."

The cancellations have infuriated the Turkish government, which accused Berlin of working against the "Yes" campaign in the referendum and summoned the German ambassador to the foreign ministry in protest.

"You will lecture us about democracy and then you will not let this country's ministers speak there," said an angry Erdogan, adding that Germany was not "respecting opinion and thought".

Chancellor Angela Merkel on Saturday called Turkish Prime Minister Binali Yildirim to try to defuse the row, and the two countries' foreign ministers are set to meet later this week.