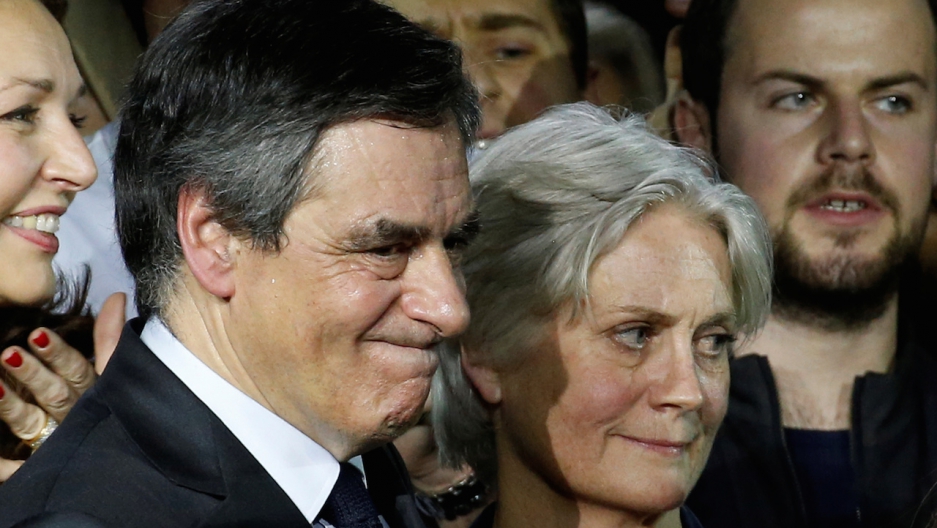 Francois Fillon, member of the Republicans party and a 2017 presidential candidatefor the center-right, attends a political rally in Paris with his wife Penelope on Jan. 29, 2017.

French right-wing presidential candidate Francois Fillon announced Wednesday that he would be charged over a fake job scandal that has battered his campaign, but vowed to continue his bid for power.

The 62-year-old former premier was the favorite at the start of the year to emerge as France's next leader after clinching the nomination for the Republicans party in November.

But he has been hit by allegations over the past five weeks that he paid his British-born wife Penelope and two of their children hundreds of thousands of euros since 1988 for fake parliamentary jobs.

Fillon said the charges, set to be announced on March 15, were "entirely calculated to stop me being a candidate for the presidential election."

"I won't give in, I won't surrender and I won't withdraw," Fillon told a news conference on Wednesday.

A source close to the case told AFP that silver-haired Penelope, a low-key political wife until recently, would also be summoned to be charged.

The Fillons' woes are the latest twist in an extraordinary campaign that has repeatedly wrong-footed observers ahead of the two-stage contest on April 23 and May 7.

Fillon has been defiant throughout, insisting publicly that the facts will exonerate him and reminding his party that they have few attractive alternatives to replace him.

But he will now face his biggest challenge yet to keep his Republican colleagues in line, with some members known to be plotting against him.

The allegations are particularly damaging after he campaigned as a sleaze-free reformer ready to administer a "radical" economic overhaul and cut wasteful public spending.

"I submit myself before the French people, because only the ballot box, and not an investigation directed against me, can decide who will be the next president of the republic," Fillon said.

A high-profile aide resigned immediately afterward, criticizing him for backtracking on a pledge to step aside if he was charged, while a centrist party allied to Fillon, the UDI, also suspended its support.

Fillon's advisor Jerome Chartier told French TV that a rally would be held in Paris on Sunday.

"It's a rally to support Francois Fillon, not a rally against the judges," Chartier said.

Macron, a 39-year-old who launched his political movement "En Marche" (On the Move) only last April, is currently shown as the winner of a run-off vote in May.

Bruno Jeanbart from the Opinion Way polling group told AFP that either Macron or Le Pen were best placed to benefit from Fillon's woes.

"One can imagine that it would be more likely be Macron," he said.

Fillon said he was the victim of a "political assassination" and claimed the justice system was being manipulated, with the help of the media, to prevent him standing in the vote.

"The presumption of innocence has entirely and completely disappeared," he said.

Fillon's being summoned means that investigating magistrates believe there is enough evidence to charge him for embezzlement of public funds, which could lead to a trial.

His criticism of the judicial system and suggestion that magistrates were acting on the orders of the Socialist government also brought a rebuke from Justice Minister Jean-Jacques Urvoas.

"The investigating magistrates are carrying out their probes in total independence," Urvoas said in a statement.

The Socialist candidate for the presidency, leftwinger Benoit Hamon, said Fillon's declarations "were of an incredible violence towards magistrates and the justice system."

Fillon, a father-of-five from near Le Mans in northwest France, had postponed a visit to a farm show earlier in the morning and announced his press conference.

When he attended the show later, he was mobbed by the media amid conflicting shouts of "Fillon, President!" and "Thief! Give the money back!" from critics and supporters there.

Though employing a family member is not illegal for French politicians, Fillon has not published evidence of Penelope's work beyond her contracts which show various periods of employment since 1988.

She and two of the couple's children were paid around 900,000 euros ($950,000) from public funds in Fillon's office budget, according to the Canard Enchaine newspaper which revealed the scandal.

French media have also focused on previous interviews given by Penelope, known to prefer life at their country manor house to Paris.

"Until now, I have never got involved in my husband's political life," she told regional newspaper Le Bien Public at the end of last year, echoing a similar statement to Britain's Sunday Telegraph newspaper in 2007.