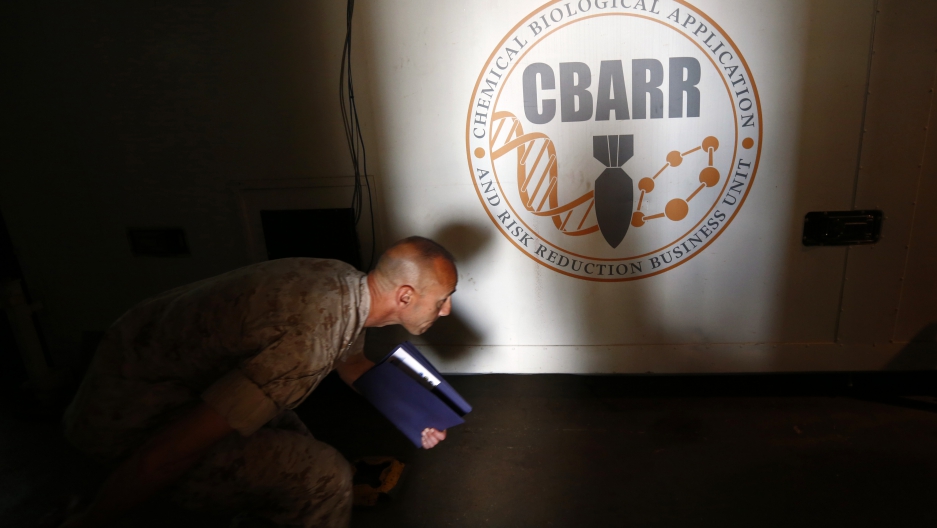 A US marine officer is seen in the MV Cape Ray. Former container vessel Cape Ray, docked in southern Spain, has been fitted out with at least $10 million of gear to let it take on about 560 metric tons of Syria's most dangerous chemical agents and sail them out to sea, officials said. VX was one of the chemicals it took on.

The nerve agent that was used to kill Kim Jong-nam, brother of North Korean leader Kim Jong-un, is among the most deadly chemical weapons developed.

It's also been banned by the United Nations.

According to Malaysian investigators, two female suspects coated their hands with the liquid toxin and wiped it on Kim Jong-nam’s face as he waited for a flight home to Macau. Investigators found VX on Kim’s face and eyes after his death.

VX is a nerve agent with the consistency of motor oil that’s deadly even in tiny quantities. It attacks the nervous system and causes convulsions, seizures and paralysis before death. 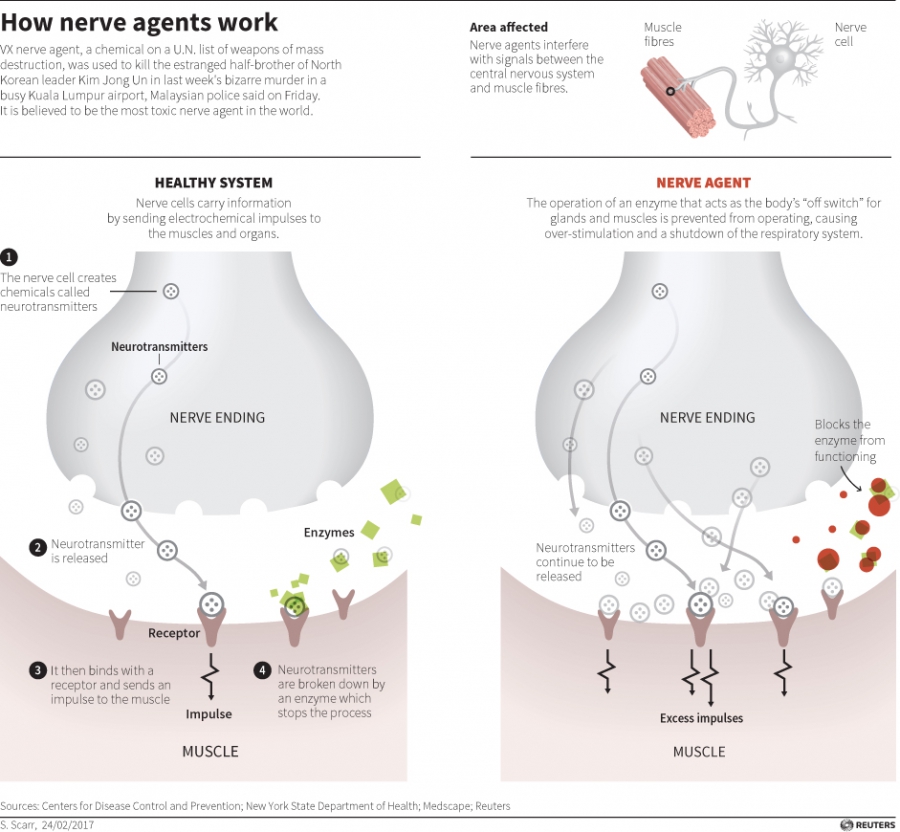 This diagram shows what nerve agents do inside one's nervous system. It was confirmed that Kim Jong-nam was killed by the VX nerve agent.

It’s labeled a weapon of mass destruction by the United Nations and is “probably the most sophisticated nerve agent that has been developed,” says Charles Duelfer, a former US intelligence officer and weapons inspector and former head of the fact-finding mission that looked for weapons of mass destruction — including VX — in Iraq.

Saddam Hussein may have used VX against Iranian forces in the Iran-Iraq War, and then again in a 1988 massacre of Iraqi Kurds that reportedly killed 5,000 people, according to the Council on Foreign Relations. The council notes, though, that no conclusive evidence exists on the matter.

“It is no surprise that North Korea would have VX,” Duelfer says.

The toxin was almost certainly produced in a sophisticated state weapons laboratory, despite being banned under an international treaty. North Korea never signed that treaty, and has spent decades developing a complex chemical weapons program that has long worried the international community.

If the Malaysia airport attack is confirmed to have been coordinated by Pyongyang, it would prove that among that large stockpile of weapons is the highly advanced and deadly VX nerve agent.

“If you’re in Seoul, you do have a lot to worry about,” Duelfer says. “North Korea can put VX into artillery rockets or artillery shells and launch them into downtown Seoul.”

A Malaysian official says one of the two women accused of wiping the toxin on Kim's face became sick later and suffered from vomiting, but that she is no longer in treatment.

“For the North Koreans to use VX as an assassination tool is a tricky matter, because you don’t want the person who’s using it to die in the process,” Duelfer says.

“Normally, there are two chemical elements that are only mixed together when you want to use this stuff,” Duelfer says, likening the poison to epoxy that doesn’t begin to harden until separate compounds are mixed.

“Clever people can figure out ways of doing that and living to tell the tale.”

Studying trace amounts of VX found on Kim’s body could provide clues as to how, and from whom, North Koreans learned to make VX, Duelfer says.

“They’re just a strange country, and it’s more evidence of why we should worry about their possession of not just these weapons but nuclear weapons,” Duelfer says.