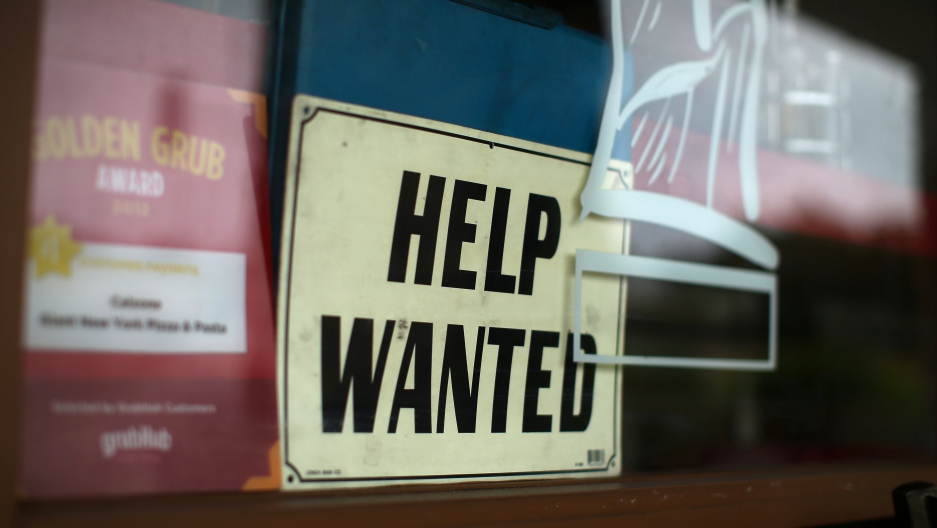 A pizza restaurant advertises for workers in Encinitas, California on September 13, 2016. In the debate over undocumented workers — and the employers who hire them — the food service industry has a lot at stake.

It was a November night in Houston as a dozen undocumented immigrants rushed from table to table in a restaurant. Late into their shift, the kitchen’s small television showed that Donald Trump had won the presidential election. Their deportation fears swelled for a minute, but there wasn’t much time for worry.

Many had to work the next day too.

Friday came and waiters and busboys started prepping for another busy night at the Mexican joint, where almost all staff are undocumented immigrants. Jarochos, chapines, catrachos, paisas and porteños tossed jokes around while they scrambled to get everything ready in the dining room. After seven hours of non-stop hustling, their shift is over. Each employee counts off their tips.

After checking off their closing assignments, they gathered in the back lot and chipped in for two 12-packs to share. Though it’s never a topic of conversation, everyone in the small group has experienced the hardships of crossing into the US illegally. But they laugh and talk about work, soccer.

I used to work with Mario at the restaurant. He described the night and day after Trump got elected in a phone call last month. It was a typical night there. As usual, Mario went home early because he had to return for a morning shift eight hours later.

Mario is 36, an observant and methodical man from rural Guatemala who has lived in the US without proper documents for more than eight years. He was eager to talk about his story when I reached out, but wished to conceal his identity for fear of being deported a second time — he has enough on his plate already, he said.

Mario is not his real name and his restaurant manager preferred not to talk, too. They both feared legal problems or issues with immigration officials. The owner of the restaurant said he would not be commenting either.

Mario has no criminal record, but because he has been deported once, he is considered a priority for deportation under the broad executive order Trump signed in January. He wakes up almost every day at 7 a.m. to ride his bike to back-to-back shifts as a waiter. Though he does not have legal work authorization, he’s worked at restaurants since he arrived in the US. Like many others who are undocumented and working in the restaurant industry, he doesn't want to be deported because his family and customers depend on him.

Restaurants have been hiring undocumented immigrants in Houston for years and the city has long-been characterized by a vibrant and diverse immigrant population, which includes many settlers from Latin American communities spanning Mexico to Patagonia.

For Melissa Stewart, it’s a good thing they’ve come because the city needs them. She’s the executive director of the Greater Houston Restaurant Association, a trade association that is part of the Texas and National Restaurant Associations. One-third of the city’s 12,000 restaurants are affiliated as members. She believes immigrants are doing the hard and necessary work that many native-born workers won’t.

“We have a talent gap and we have jobs that are going unfilled,” she says. “They are a valuable part of our economic engine — most of the city’s restaurants are probably employing at least one first-generation, recently arrived Latin American immigrant.”

And that includes immigrants with or without proper work authorization. Stewart’s association advocates at all levels of government to bring legal status for people already here and to find a path for low-skilled labor to come in.

According to Michelle Carpenter, an analyst at the global risk consultancy firm Verisk Maplecroft, the US private sector could lose hundreds of millions of dollars over the next decades if most unauthorized immigrants were to be deported.

Enforcing current law for some 11 million undocumented immigrants would shrink the workforce by as much as 6.4 percent and cost taxpayers billions for all deportation processes, according to a 2015 study by American Action Forum, a center-right policy research institute.

A November study by the Pew Research Center says that as of 2014, the service industry had the largest percentage of unauthorized immigrants nationwide, making up about a third of the total workers in that sector.

However, not everyone thinks they are a necessary part of the workforce. Roy Beck, executive director at NumbersUSA, an “immigration-reduction” organization in Washington, DC, says there are 50 million working age Americans and legal immigrants who are not in the labor force.

“That’s a huge surplus of workers who have been pushed out. It’s a national problem.” He refers to a report by the Center of Immigration Studies, which also advocates for less immigration.

Though he believes immigrants are almost always hungrier for work than native-born workers, he says the service industry has been forced to hire foreigners over locals.

“Gigantic flows of illegal foreign workers for years led many businesses to start hiring them.” As a result, he says, “most employers followed in order to remain competitive.”

The unauthorized immigrant population nearly doubled from 1995 to 2005, peaked in 2007, and has remained practically unchanged at roughly 11 million since 2009, according to Pew Research.

As for current unemployment rates, Houston, the state of Texas and the US hover around 4.5 percent, according to the Bureau of Labor Statistics. It’s about as low as it’s been since the 2007 recession.

Still, Beck says it may be hard to recruit Americans if they perceive their future workplace is a foreign place, where everyone speaks a different language.

In a way, Mario can attest to that, though not in the same way Beck sees it.

“I’ve met so many people from different Latin American countries that I even feel my work has allowed me to learn new things about the world. I’ve even worked with plenty of Americans — they love it because they learn Spanish and other cultural aspects about us,” he says. “And even though there are different languages, accents and ideas in our workplace, we all get along because we’re in there together working for the same reason.”

The immigration formula is much simpler for Mario than for Roy Beck. “We’re just here to work and make money to help our families out,” he says “We’re not hurting anyone. We weren’t borderline poor back home, but I wanted a better future for my family.”

Mario has a wife and two daughters in Guatemala. The last time he saw them in person was five years ago when he was deported from Houston. He says Department of Homeland Security agents — la migra, as they are sometimes called by immigrants who hail from south of the border — picked up him and others who were waiting outside a corner store to be chosen for daily gigs by small construction contractors.

He was only back home for a few days before he returned with a coyote, slang for an immigrant smuggler. After making his way to Reynosa, Mexico, from Guatemala, he paid around $3,000 to get to Houston.

Trump’s first choice for labor secretary, fast-food CEO Andrew Puzder, supported a path to legal status for undocumented workers. He was endorsed by the National Restaurant Association. On February 15, amid dwindling support amongst Democrats and Republicans, Puzder removed his name for the nomination before confirmation proceedings began. A week later, Trump named Alexander Acosta his new pick. Acosta is a former US attorney and dean of the law school at Florida International University.

During the campaign, Trump supported an expansion of E-Verify, a system for employers to confirm worker eligibility by comparing employee information with homeland security and social security data. It’s the kind of requirement Beck and others who favor a strict implementation of immigration laws say could curb the arrival of undocumented workers.

The program has not been mentioned in any of the executive orders on immigration Trump has already signed, but a draft order leaked to the press in January called on the Department of Homeland Security to “incentivize” more businesses to use E-Verify. Currently, it is mostly an opt-in program, required only for federal contractors and workers and companies in some states. In Texas, public employers are required to use the database.

According to the US Citizenship and Immigration Services E-Verify usage statistics, though, Texas is among the top states working with the system. Some 37,000 businesses had opted in to the program by the end of 2016. And nationally, compared to other industries that use E-Verify, the food services industry ranks third.

Stewart of the Greater Houston Restaurant Association says that some restaurants in town are not hiring undocumented immigrants willingly or knowingly. They likely hire people with false documents. She says that restaurants follow the employment eligibility rules as best they can while still adhering to equal opportunity hiring practices.

“In the end, they’re trying to run a business so if someone presents the right paperwork, the majority of places will play by the rules,” she says.

Mario has never heard of E-Verify, but he was frank when I asked him about fraud. “I’ve met people hired with fake social security numbers,” he says. Many people he knows also pay just as much in taxes as any other US worker, though they are not eligible to receive social security benefits because of their legal status.

According to estimates by the Institute on Taxation and Economic Policy, undocumented immigrants pay over $11 billion in local and state taxes, a figure that would increase if more people gained legal status.

“At the end of the day,” Mario says, “I’m just here to work hard and enjoy life as best as I can without getting into trouble. I just wish borders didn’t keep people from finding the future they want.”