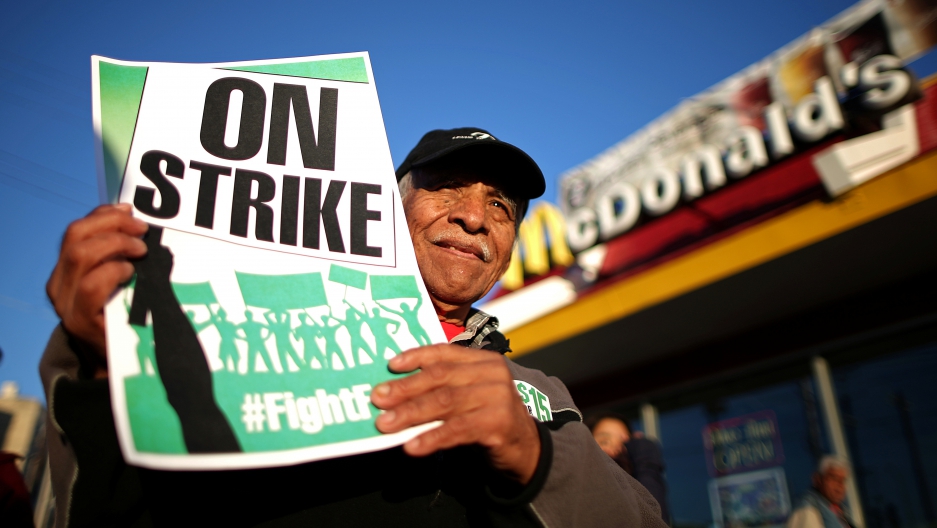 Fast food worker Rogelio Hernandez, 72, who works at Carl's Jr., has a wife and four kids. He earns roughly $290 every two weeks and participated in a "Fight for $15" wage protest in Los Angeles on November 29, 2016. President-elect Donald Trump’s choice for secretary of labor, Andrew Puzder is the CEO of CKE Restaurants, which owns Carl’s Jr. and other franchises. He opposes an increase to $15 because he says it will cause restaurants to close.

President-elect Donald Trump’s nominee for secretary of labor takes a dim view of efforts to raise the minimum wage, but has a soft spot for undocumented immigrants.

Andrew Puzder is a fast-food CEO. He’s the head of CKE Restaurants (which runs fast-food chains Hardee’s and Carl’s Jr., and Green Burrito in the west). In that role, he is a well-known opponent of minimum wage increases.

Puzder is a prolific writer, speaker and blogger and has been an ardent supporter of Trump’s economic platform — namely, removing regulations on businesses and dismantling the Affordable Care Act.

But his industry is highly dependent on immigrant workers, documented and undocumented. So perhaps it is unsurprising that Puzder thinks immigration reform is important. Last year he wrote in the Wall Street Journal about the importance of changing how immigrants are allowed into the United States. In addition to championing a system for employers to verify immigration status and border security investments, he called for a “path to legal status” for undocumented immigrants:

"The next president will need to work with Congress to establish consequences for violating our laws that are harsh enough to be meaningful but also reasonable. But with some 11 million people living in the US illegally, every candidate should support a path to legal status — short of citizenship — for illegal immigrants willing to accept responsibility for their actions and take the consequences.

"Such consequences could include passing a background check, paying a fine, demonstrating the ability to be independent of welfare, engaging in community or military service, learning English and taking an American civics course. Every option should be on the table, except amnesty, which forgives illegal conduct. It isn’t amnesty if immigrants admit wrongdoing and accept punishment."

The National Restaurant Association endorses Puzder and says he is an active member. Citing concerns over filling jobs with US-born employees, the business group supports immigration reform that will help the industry grow. Their platform is very close to Puzder’s position.

That view, he explains, makes it hard to predict what kinds of policies Puzder will adopt, especially since Puzder is also against raising the minimum wage.

“Those two things can be at variance with each other,” he says. “If he really wants to advance the interest of US workers then you really have to increase their wage. If you don’t increase their wages then these jobs become unattractive to US workers ... and it becomes a magnet for foreign workers.”

While Puzder talks about the economic imperatives of US immigration policy, he also made a moral appeal to the Republican Party in comments to The Hill last year: “Our values indicate we should be the party of immigration reform," he said. "[Many undocumented immigrants] live in fear of being deported, losing what they've built and being separated from their families."

It is important to note that Puzder’s position, as well as Trump’s proposals, don’t actually deviate far from the Obama administration’s current priorities. (Vox has a more pointed take on this: that Puzder is actually the kind of pro-immigration Republican Trump campaigned against.) Puzder’s position also contrasts with past statements by Trump’s nominee for attorney general, Alabama Sen. Jeff Sessions.

The Department of Labor is also in charge of certifying foreign laborers before they are issued visas to come to the US, including the H-1B program for skilled workers and the H-2A program for seasonal agricultural workers. On this issue, Puzder has advocated for more flexibility.

“Guest-worker visas should ebb and flow with the economy. Legal immigration should focus more on what workers can contribute to the economy, as is the case in most other nations, and less on distant familial relationships,” he wrote in the Wall Street Journal in July.

Trump said in November that his Department of Labor would be directed to crack down on abuses of employment visa programs and “end forever the use of the H-1B as a cheap labor program.” He reiterated this as a priority Friday at a rally in Baton Rouge, Louisiana.

Mathematician Norman Matloff points out in his blog that “you can’t fix this complex program if you don’t understand it.” And what Trump and Puzder are able to do will be limited by the plethora of lobbying and misinformation that surrounds the issue of H-1B visas.

Puzder was among the top individual contributors to the Republican Party this year. He and his wife gave almost $400,000 in 2016, including contributions to several Republican presidential campaigns. Find out more about his political contributions at OpenSecrets.org.

What should we be covering in Trump immigration news? Start a conversation in the Global Nation Exchange discussion group on Facebook, tweet at us with the hashtag #globalnation or send me an email at ashah@pri.org.