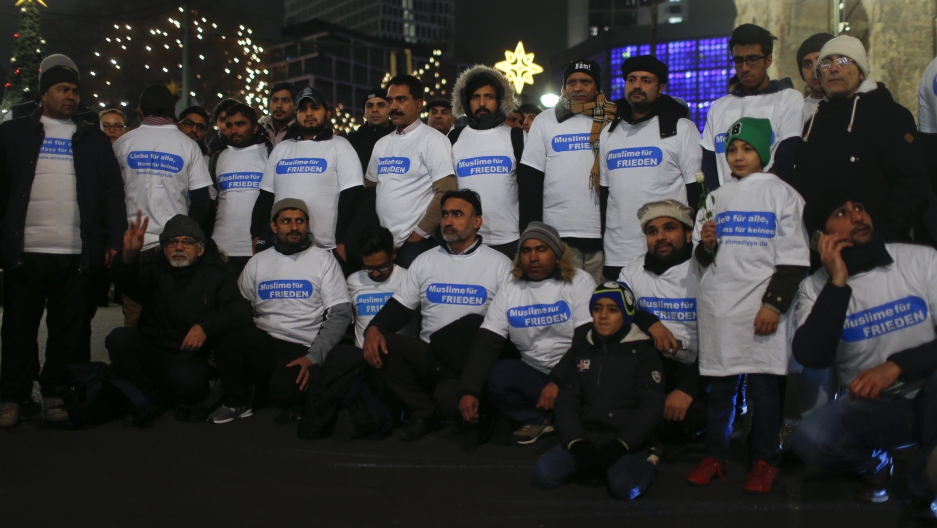 Asylum seekers wear shirts reading "Love for everyone - hate for nobody" to commemorate the 12 killed victims of a truck that ploughed into a crowded Christmas market at Breitscheidplatz in Berlin, Germany, December 20, 2016.

Germany will speed up expulsions of rejected asylum seekers under measures adopted by Chancellor Angela Merkel's cabinet Wednesday, as controversy rages over sending people back to strife-torn Afghanistan.

Under the new measures, immigration agency officials will also be allowed to access applicants' smartphones or other digital devices in certain cases to help determine their identity and country of origin if they claim to have lost their passport.

Interior Minister Thomas de Maiziere said that, for example, "if someone has phoned Sudan 90 times and claims to be from Eritrea, then this would give us a clue that the person is actually Sudanese."

In a deportation later Wednesday, some 50 Afghan citizens were set to board a charter plane from Munich, the third such flight since late last year, drawing protests from Amnesty International and left-wing opposition parties.

The EU's top economy — which has taken in more than one million asylum seekers since 2015 — last year repatriated some 80,000 people who were denied refugee or asylum status, a process it wants to speed up.

While Germany granted safe haven to most people from war-torn Syria, it has argued that it can safely repatriate people to Kabul and other parts of Afghanistan, where German troops are part of NATO forces seeking to create stability.

Merkel — who is standing for re-election in September amid a voter backlash over the mass migrant influx — two weeks ago won agreement from leaders of Germany's 16 state governments on the repatriation plan.

Germany also plans to detain people scheduled for deportation if they are considered a threat to public security, or to fit them with electronic ankle bracelets.

Among the other planned measures are national "deportation centres" and financial incentives for those who return voluntarily.

The measures, subject to approval by parliament, were announced just as US President Donald Trump's administration moved to speed up mass expulsions of illegal immigrants.

Germany also wants to increase pressure on countries which refuse to take back their citizens or hamper the process with red tape and has stepped up talks, especially with North African nations.

The head of refugee rights group Pro Asyl, Guenther Burkhardt, charged that the package of measures "paves the way for raid-like deportations and eavesdropping on refugees".

Merkel's government has faced most opposition over sending Afghan nationals back, under an agreement signed between the European Union and Afghanistan in October.

Despite agreeing to the package of repatriation measures, five German states have decided to halt most expulsions to Afghanistan, citing the worsening instability in the war-battered country.

The United Nations reported in early February that civilian casualties in Afghanistan peaked in 2016, with nearly 11,500 non-combatants — one third of them children — killed or wounded.

Repatriating citizens there was incompatible with respect for human rights, he said, because in Afghanistan "at different times different places are insecure to varying degrees".

De Maiziere insisted that northern regions of Afghanistan and the capital Kabul are safe enough to make repatriations "acceptable".

Merkel's chancellery chief-of-staff Peter Altmaier said that Germany would refrain from sending Afghans back to many regions that are considered unsafe.

But he added that "there are millions of people in Afghanistan who go to school and go to work and live normal lives with their families".