A congregation at the Evangelical Lutheran Trinity Church and Community in Berlin.

No group is more affected by Trump’s immigration ban than Iranians. Over 35,000 Iranians come to the US each year with temporary visas — more than any other nationality on the seven-country list.

Meanwhile, in Europe, many are struggling for recognition alongside unprecedented numbers of refugees.

Most of the asylum-seekers in Europe now are fleeing violence in Syria, Iraq and Afghanistan, but in 2015 more than 25,000 Iranians also sought asylum in Europe.

Once there, many are desperate not to be sent back, for fear of being jailed — or worse — for their beliefs or lifestyles.

About a fifth of Europe’s Iranian asylum-seekers are in Germany, and a small number have found sanctuary in a church in Berlin famous for welcoming migrants.

The Evangelical Lutheran Trinity Church and Community in Berlin has changed dramatically of late.

In just a few years, membership has become overwhelmingly Iranian, and most services are now in Farsi.

“In 2011 I baptized an Iranian for the first time,” he says. “Then, until the end of 2012, one invited the next one, and things were growing so fast that we couldn’t stay longer in that church.”

They moved into a bigger church. And it quickly filled up. By 2013 there were 150 parishioners from Iran and Afghanistan — mostly Iran. Now there are some 1,500.

In Iran and Afghanistan, Christians are a tiny and invisible minority, but among refugees, they’re a substantial and growing force. In Berlin, more and more were drawn to this church for the Farsi services. They are also attracted to the church for the hospitality.

Ten of those parishioners, mostly from Iran, are actually living at the church — confined to the property — for up to six months. It’s part of a last-ditch effort to avoid deportation. All sleep on bunkbeds in two small rooms in the church building.

They and other parishioners have a lot in common. All the Iranians I meet had first fled to Norway, hoping to get asylum there.

They didn’t. So to avoid deportation, they fled to Germany. But under the so-called Dublin Regulation, you can't just keep hopping countries, asking for asylum. You're not eligible to apply for asylum elsewhere in Europe for at least six months.

This church has allowed Iranian Christians to take shelter and avoid being returned to Norway while they wait out those six months.

The residents fear being sent back home for various reasons, some relating to their faith. Ali Tariverdi originally fled Iran after police raided his friend’s house and found Tariverdi’s laptop with Christian videos on it.

Saeed Seyed Hasan Siah says he was jailed in Iran for his political activities in college, but he thinks his Christian faith could incur something much worse.

“Anybody changing [from] Islam to another religion,” he says, “they are killing him.”

Human Rights Watch has documented numerous cases of Christian converts being arrested in Iran. Some have been condemned to death, although recent sentences were overturned.

Siah says it’s tough being confined here for half a year, but not like the prison time he did in Iran. He spends his days doing chores, preparing Farsi songs and services, studying German and playing foosball. 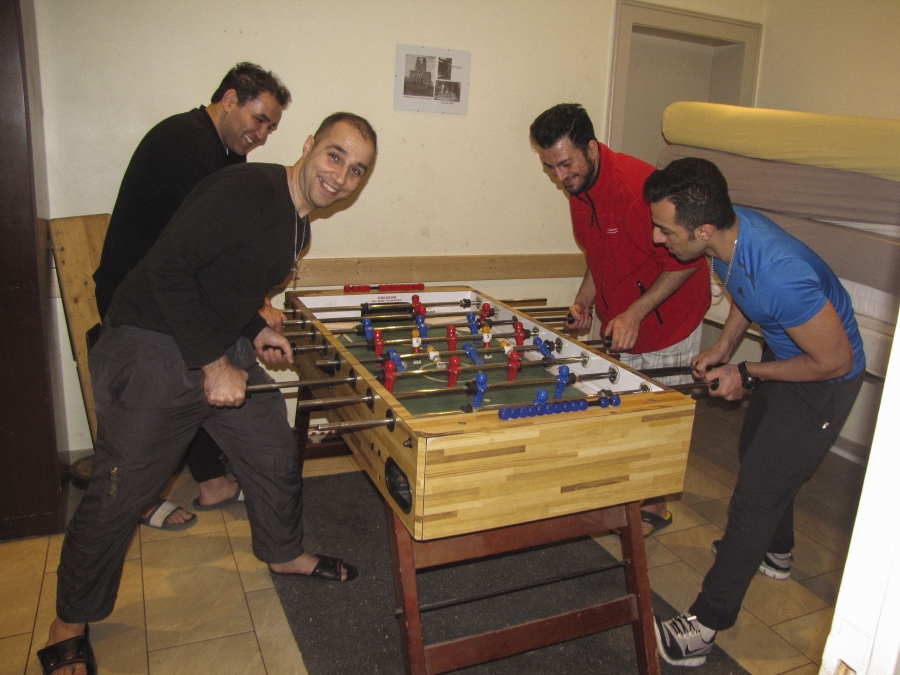 Foosball is one diversion for the residents of the Evangelical Lutheran Trinity Church and Community in Berlin. Left to right: Ali, Amir, Saeed and Ali.

It's all men that are living at the church. Because of the close quarters, women are rarely taken in.

Women do come by though, and speak with the pastor.

There’s Niloofar Sani, who says she fled arrest in Iran for being a female pop singer. And there’s Yeganeh Allahyari, a 16-year-old traveling with her mother.

“When I was 14 years old,” Yeganeh says, “my father said to me, ‘Now your age is good for the marriage.’ But I don’t want marriage because I love too much to study. It is very, very, very early for me. I don’t want.”

She says when her mother, Masoomeh, protested to her husband, he began to beat her.

After a year in Norway, they recently arrived in Berlin, where they’re staying in a shelter. But their journey is far from over.

“We gave all of our document[s] to the Norway’s government,” Yeganeh says. "And, now we have a problem because the [German] government said, ‘How we can know she is your mother and you are her daughter?’”

Masoomeh seems to understand the gist of our English because tears are streaming down her face.

I later ask Pastor Martens if he will take them in.

“We are just looking for some alternative,” he says, sounding agitated. “It’s very difficult because there are very, very few congregations who are willing to help us.”

He says they can’t stay here, with all the men. But when I ask Yeganeh, she says Pastor Martens has already done so much for them, like writing a letter to authorities on their behalf and connecting them with a lawyer. She knows he will let them stay.

As for whether the Iranians who’ve sheltered in his church will ultimately be allowed to stay in the country, the odds are good. In addition to receiving hundreds of thousands of refugees from war-torn countries each year, Germany also accepts most Iranian asylum applications filed here.