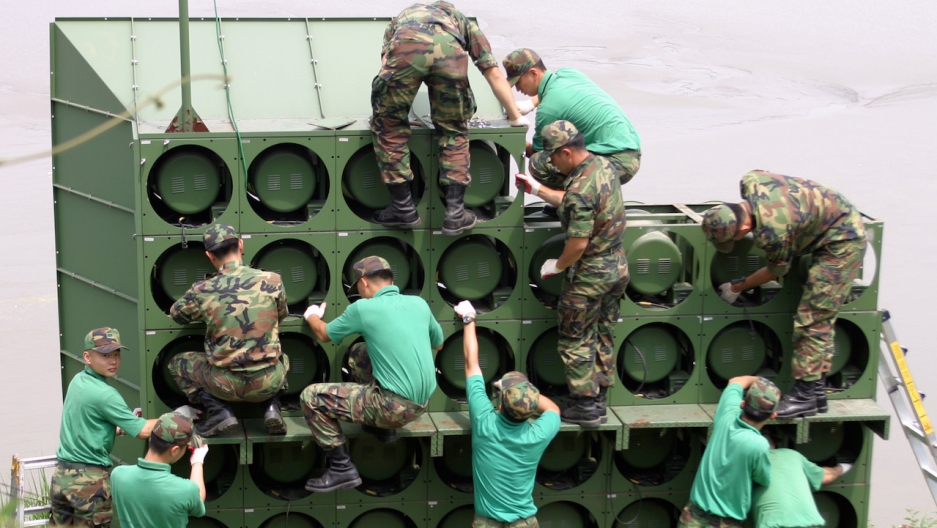 South Korean soldiers remove loudspeakers set up for propaganda purposes near the demiltarized zone in Paju in this file photo from 2004. North and South Korea stopped blaring propaganda at each other across the fortified demilitarised zone border, briefly, to mark the fourth anniversary of a landmark summit between their leaders.

In North Korea, the Kim clan can do no wrong.

Its deceased Dear Leader, Kim Jong-il, was practically deified. Official accounts say he was born beneath a double rainbow — and his earthly arrival caused a new star to appear in the cosmos.

Dear Leader’s kids, however, could have used an extra helping of supernatural serenity. It appears Kim Jong-il’s oldest son was killed this week on the orders of his youngest son, the paranoid dictator Kim Jong-un.

Here are a few details you won’t hear on the Pyongyang nightly news.

The women, presumably deployed by the regime, struck their target on Feb. 13 inside a busy Malaysian airport. Kim Jong-nam was trying to check into a flight when he was squirted in the face with fast-acting poison. One of his suspected killers actually wore a shirt that read “LOL.”

Safe to say, these ugly details are not widely known inside North Korea. The nation is hermetically sealed off from most outside reports.

South Korean psy-ops agents, however, have found a way to penetrate that seal. Their method is fairly crude. They’ve simply lined up ultra-powerful loudspeakers along the chilly border with the North.

According to the outlet, The Chosun Ilbo, the South Korean military will use these speakers to blast news of the assassination into the country.

This is not a new technique. For years, South Koreans have sporadically cranked up these speakers to transmit inconvenient facts to their northern counterparts.

Each broadcast is meant to prune the thicket of state indoctrination, a web of myths planted in North Korean minds since childhood.

The loudspeakers clearly annoy the Pyongyang regime, which previously declared that “psychological warfare against the North is lighting the fuse of war.” They’ve even threatened to blow them up.

In an ideal scenario, the speakers would send subversive news rippling through the information-starved nation of 25 million. But it’s unclear if this tactic is all that effective.

Under ideal weather conditions, the sound penetrates North Korea by about 15 miles. It mostly rings out over terrain inhabited by border guards.

According to Kelly, they also play “fun stuff such as popular music, sports scores and Entertainment Tonight-style crap.”

“Then they mix in information about North Korea’s economic performance and how corrupt the North Korean elite are,” he says. “So you get a mix of undisputed truth-telling, entertainment and propaganda.”

It’s unclear how much the average North Korean knows about Kim Jong-nam’s existence. Told straight, his biography would indicate that the Kim clan is not 100 percent free of scandal — and would undermine the notion that their bloodline is somehow sacred.

South Korean intelligence has long claimed that Kim Jong-nam was targeted for death and that he’d begged his little brother for mercy. Born to a different mother than Kim Jong-un, he was estranged from the family.

Kim Jong-nam, 45, was perhaps the most Westernized of his siblings. He studied in Europe and resided in the Chinese territory of Macau, a former Portuguese colony.

He even maintained a secret Facebook account — a pedestrian act in most of the world but a severe crime in his native North Korea.