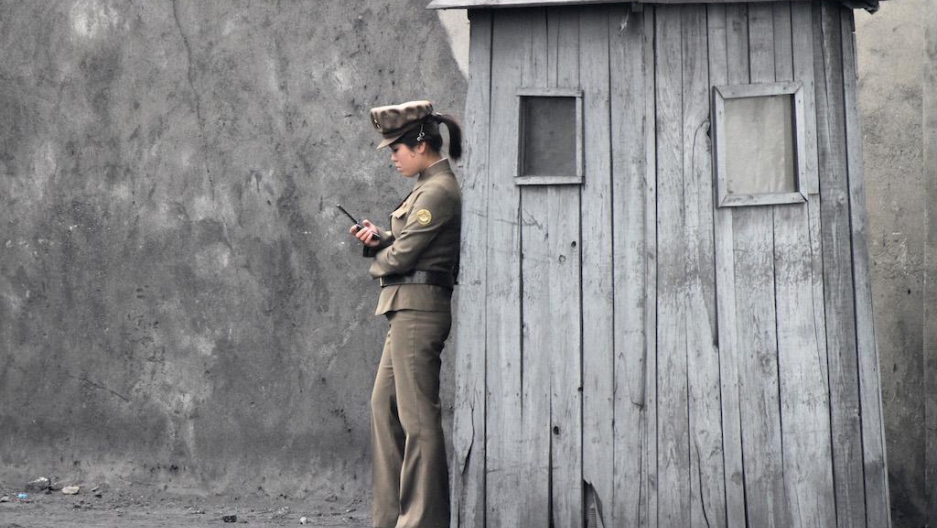 A North Korean soldier stands sentry on the banks of the Yalu River, June 1, 2014.

Somewhere on a North Korean hilltop, the wind carries a ballad to a border guard’s frost-nibbled ears.

This poignant tune, blasting from South Korean loudspeakers across the border, helps erode the soldier’s faith in Kim Jong Un’s regime. Its lyrics kindle dreams of a better life. So he risks execution by telling his comrades that they must rebel against their masters and strive to imitate South Korea, where freedom — and pop music — abounds.

Along with missiles and artillery cannon, the South Korean military is now aiming high-decibel loudspeakers at North Korea. Their goal: beaming subversive audio at their information-starved neighbors in hopes of stirring dissent.

This includes details of the Kim clan’s abuses, but also a set of popular Korean-language songs. This South Korean psy-ops mixtape is dominated by K-pop, which projects a flashy, fun vibe into a land where entertainment is mostly limited to droll odes to the Kim clan.

Related story: How do you infuriate North Korea's leaders? Try blasting criticism at them through giant speakers

But one track stands out among the bouncy, electronic love songs. It’s performed by a 52-year-old singer, not a pigtailed teen starlet. Her name is Lee Ae Ran and, until recently, she wallowed in obscurity and debt.

Her ballad “A Centennial Life” is delivered in a warbling, sometimes guttural singing voice. The lyrics tell of an aging woman who will not submit to the “death angel” until she has completed her life’s mission. Listen here:

This surprise hit now has over 8.8 million views on YouTube. It displays “a strong will for life” and “rejects death,” according to South Korea’s official Culture and Information Service, which finds the ballad doubly touching given the singer’s “20 some odd years of obscurity.” (The lyrics are here.)

The song is certainly inspiring. But blaring it across the demilitarized zone — where it’s been played for more than a fortnight — is highly unlikely to coax North Koreans into defecting or rebelling.

South Korea claims that, under ideal conditions, the broadcasts can reach up to 15 miles inside North Korean territory. But the audio is probably heard by between “a few hundred and a few thousand” people, Kelly says, and almost all would be North Korean border guards.

“Some are artillery units,” he says. “And who knows what they hear because they’re really dug in and basically living in caves.”

Music is just one component of the daily broadcasts. They begin by reciting “basic information to establish veracity,” Kelly says. “So they might talk about weather or big world events — like ISIS or, say, an earthquake in Pakistan — that even people in North Korea would know about.”

This is accompanied by “fun stuff such as popular music, sports scores and Entertainment Tonight-style crap,” Kelly says. “This is designed to make it seem like a trustworthy, normal radio station.”

“Then they mix in information about North Korea’s economic performance and how corrupt the North Korean elite are. So you get a mix of undisputed truth telling, entertainment and propaganda.”

“If, at age 60, the death angel comes to take me away, please tell him I am too young to go right now.”

Many military defections, Kelly says, are triggered by serious abuse: officers beating subordinates, selling their food on the black market or even loaning them out as slave labor. A few faintly heard songs in a border camp are unlikely to stoke an insurrection.

So why does South Korea bother blasting music at this small number of bedraggled soldiers — especially grunts who’d have to brave a maze of land mines and electric fences to defect?

The broadcasts are a way to annoy North Korea without igniting a full-on war. In early January, when the Kim regime detonated what it called a “hydrogen bomb” in an underground testing facility, South Korea was determined to retaliate.

But instead of launching missiles, which risks a long cycle of bloodshed, they simply cranked up their speakers. The broadcasts belong to a broader strategy: punching tiny holes in the Kim regime’s make-believe world until it someday collapses.

Hollywood DVDs, USB drives and balloons bearing anti-regime pamphlets have invaded North Korea for years; they’re circulated by citizens risking a stint in torturous prison camps. This outside information is “bombarding North Korea from all sides,” Kelly says, “and it chews away at their ligaments of power.”

North Korea, in its typically bombastic style, has warned South Korea that “psychological warfare against the North is lighting the fuse of war. Stop the loudspeaker broadcasts immediately!”

However, North Korea was forced to communicate this message via pamphlets launched on helium balloons. Like its southern neighbor, North Korea has loudspeakers — but the equipment is reportedly too feeble to send intelligible broadcasts across the border.

And instead of firing back with their own heartfelt ballads, the North Koreans decided to send airborne cartoons depicting South Korea’s president — clad in a pink bikini — being shoved in a trash bag as “human filth.”