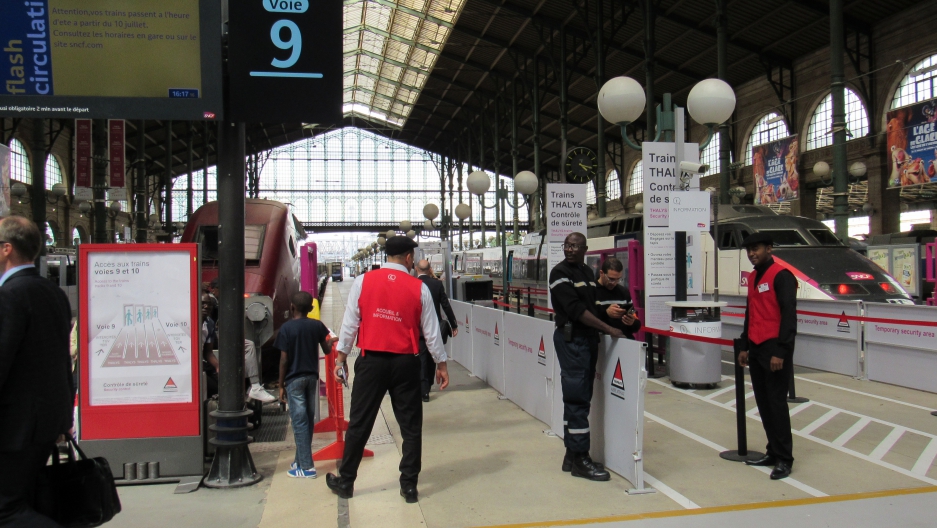 This is the platform in the Gare du Nord in Paris where you board the Thalys train to Brussels and Amsterdam.

At the Gare du Nord railway station in Paris, passengers line up at security gates and climb aboard the sleek, high-speed train known as Thalys. It connects Paris to Amsterdam with a stop in Brussels in between.

Aboard this transnational train, you are free to snooze the entire trip because the two borders it crosses are mostly ignored. Passengers like me only receive a slight hint they’ve passed into a foreign country: a chime and a text message welcome me to Belgium, with detailed roaming rates. And then an hour later, my phone buzzes again, this time for the Netherlands.

In a climate where border security is a hot political issue, it may seem odd to be able to zip through foreign countries so effortlessly. But this smooth travel is made possible by the 1985 Schengen Agreement, named after a village in Luxembourg. Catherine Wihtol de Wenden, a political scientist at the National Center for Scientific Research, or CNRS (as it's known in France), in Paris, said that particular village was picked for its strategic position.

“Schengen is at the border of Luxembourg, France and Germany,” she says, “so it was considered in 1985 as a symbol of free circulation for the Europeans.”

She says the Schengen Agreement transformed European travel and trade.

“In the '60s and even '70s, it took hours to cross the border, so for the economic exchange it was a real problem; for the people coming on holiday, for example, in Spain, it could take one day.”

The agreement started with just a handful of countries and grew to include 26. After France declared a state of emergency following the Paris attacks in 2015, some extra security checks were put in place, but free circulation is still the norm.

Isabelle Diancourt lives outside Paris and crosses the border when she visits her daughter in Belgium.

"In fact, [crossing] the border is nothing," she says. "It just consists in slowing down slightly. And then on the other side, once you have gotten to Belgium, you know it, because highways are not as well-kept, and it’s hard on your buttocks in the car."

And when it comes to flying within the Schengen area — say, Paris to Rome — all that the airlines require is a basic picture ID, no passport.

Open borders have made it easy for any EU citizen to work and study abroad. But in the wake of devastating terror attacks, and Europe’s refugee crisis, many politicians are questioning this policy, including France's far-right National Front leader Marine Le Pen.

"Schengen Europe is a Europe of thieves," she said at a rally last year in front of a fired-up crowd. "A Europe without borders is a Europe of all kinds of trafficking, we must restore national borders!"

Le Pen is a leading contender in France’s current presidential race. If she wins, she’ll want to pull out of the Schengen Agreement, which she has called “a mad and criminal utopia.”

Guillaume Nédélec frowns at that idea. At 28, this French citizen is younger than the Schengen Agreement. He has traveled extensively throughout Europe, and he lived in London and Frankfurt before settling in Brussels.

"For me, I‘m telling you, frontiers don’t exist. At least in Europe," he says.

Even though there was a slight slowdown at the Belgium-France border after the terrorist attacks in Paris and Brussels last year, Nédélec did not have to stop or get out of the car. He doesn’t think the current terror threat warrants messing with the Schengen Agreement.

"I think this is not a good enough reason to close borders," he says, adding that he thinks there are better ways to deal with security issues and that the Schengen Agreement’s benefits outweigh its disadvantages.

After the suspect in the Berlin Christmas market attack managed to cross four borders before being shot and killed by police in Italy, there was renewed concern over how porous Schengen frontiers are. Germany increased checks on some of its borders, and French conservative presidential candidate François Fillon called for a Schengen reform with beefed-up security on external borders.

But political scientist Wihtol de Wenden warns against retreating from an agreement that she says promotes economic growth and understanding between Europeans.