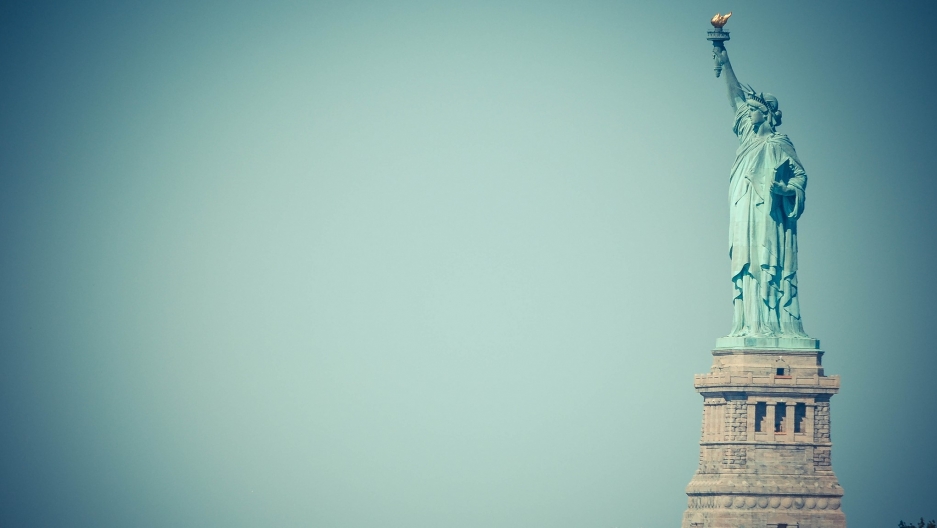 Last fall, an ad campaign for the Amazon series, “The Man in the High Castle,” controversially depicted the Statue of Liberty giving a Nazi salute.

It was an advertisement for the second season of Amazon’s show “The Man in the High Castle.” Based on a Philip K. Dick novel, the drama imagines what the United States would look like in the 1960s if the Nazis had won World War II.

Not surprisingly, the billboard drew controversy — although not as much as the last time Amazon used Nazi imagery as advertising fodder, to promote the show’s first season. (In 2015, the company plastered a New York subway car with Nazi-themed advertisements. The ads were removed at the request of New York Gov. Andrew Cuomo.)

But for some, including The New York Times’ chief television critic James Poniewozik, the image of a “Sieg Heil”-saluting Statue of Liberty came to an eerie crossroads for America. For him, watching the show now, after the presidential election, feels different than it did a year ago.

He wrote about the sensation in an article with the subtitle “An Alternative America Hits Home,” noting that “But if it would be hyperbole to treat the series like a documentary, it would be denial to say it plays no differently now than it did before.”

“There are actual real Nazis out there who are pretty psyched right now,” he says, “You know, rampant on social media, on Reddit, cheering on Donald Trump.” He cites the example of Richard Spencer, the white nationalist who led hundreds of supporters in a “Hail Trump, hail our people, hail victory!” cheer in Washington, DC, last November.

“There's a lot of space between ‘Trump is literally Hitler’ and ‘everything is fine,’” he says. “And a lot of the stuff in that space is bad enough on its own.” Watching the alternative history presented in “The Man in the High Castle,” he sees some disturbing ties to our present reality.

“Which is not to say that we're being ruled by Nazis, but you're seeing the stirrings of things that are illiberal, anti-democratic, bigoted,” he says.

In the show (spoiler alert), the western United States becomes Japanese territory after the war. And the prisonlike camps where tens of thousands of Japanese Americans were actually held? “They were liberated by the Japanese," Poniewozik says. “And the Japanese Americans held there were viewed hostilely by the conquering Japanese.” For him, that bigotry is reminiscent of current news.

“Segue from that to the fact that not long after the election, a Trump supporter was being interviewed on Fox News by Megyn Kelly,” he says. “Asked about Donald Trump's Muslim immigration ban, a Muslim entry ban, [he] justified it by citing the historical precedent of Japanese American internment camps.”

“This is not an exact parallel to fascism in the 1930s or the 1940s,” he says. “And even if it's not the same kind of bad thing, when you start encountering these things, that's when you start asking yourself, ‘I'm actually living in a situation where things like this are being talked about.’”

Given the show’s production schedule, the relevance to current events is likely unintended. “Obviously, alternative histories involving World War II are a very longtime thing,” Poniewozik notes. But when it comes to it, he says the show gives a curious glimpse of a fascist, occupied America’s familiar roots.

"They very carefully thought through 'what would the popular music be like?'" he says. “Well, you'd remove all the non-Aryan influences and it would be this very sort of bubble gum pop. I think there is a Rock Hudson movie in the first episode, that sort of thing. But deracinated in that way.”

“And it brings up this, this sort of curious insinuation that if an invading army were creating a fascist America at that time, you'd have some raw materials here that you could build [from]. It’s not just imposing Teutonic culture on a subjugated country.”