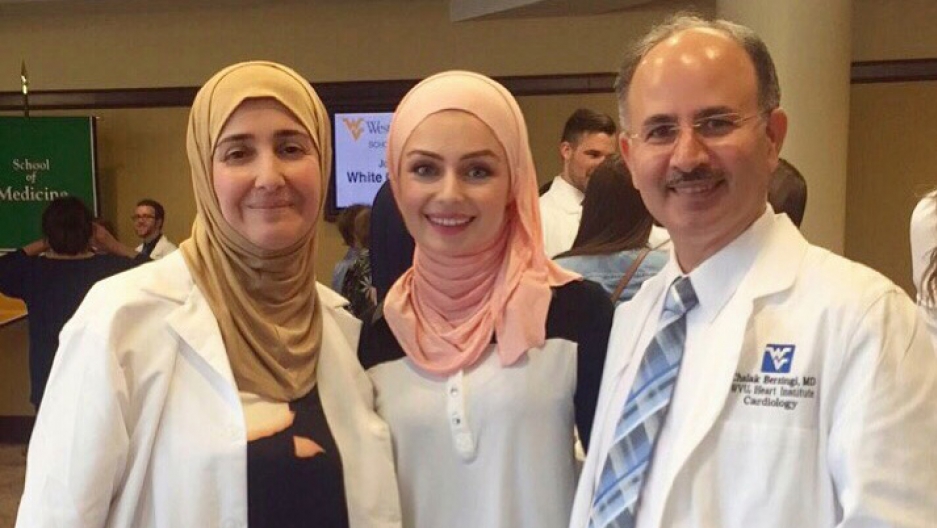 Political divides, regional clashes, racism. Those are frequent topics in the news these days. But this story is different.

Dr. Chalak Berzingi fled his hometown in Iraq and ended up more than 6,000 miles away in America — in Trump country. He works in a small, deeply conservative Appalachian town. It might sound like a place that would be unwelcoming to a Muslim immigrant like him. To the contrary, the people of Elkins, West Virginia, have embraced Berzingi, and vice versa.

Elkins, which has a population of only about 7,000, is predominantly white and rural. It has one of the highest unemployment rates in the state. Elkins is located in an area that voted overwhelmingly for President Donald Trump. So, it's not hard to imagine that there might be plenty of support here for Trump's immigration order against travelers from seven Muslim-majority countries, including Iraq.

And yet, says Berzingi, "I have been treated from day one ... only with respect."

Berzingi, a cardiologist, says he has a close bond with his patients. "I'm connected to the community. I love the people. I love the place." And, he says, his patients see that devotion and reciprocate. "They come to me in the first place because they have a concern about their health and they want somebody who listens and understands. I pay attention and listen and do my best, and take [their concerns] into my heart. Over time, that builds a bond."

Berzingi says since Trump's immigration restrictions went into effect, his patients have gone out of their way to say nice things to him. "Last Tuesday, one of my patients came to my office," Berzingi recalls. "And he said, 'I just want to let you know that ... a large number of my fellow citizens went out and protested the travel ban just because we feel this probably will touch people like you."

But, Berzingi admits, his patients rarely discuss their political views or support for Trump with him. "During my daily interaction with patients, it just doesn't come up." He says he can't explain their rationale for supporting Trump. "I still can't understand it."

Berzingi says he went into cardiology as a way to use his skills and earn enough so he could eventually go back to Iraqi Kurdistan. He thought he'd be most needed there. But then his youngest son was diagnosed with autism. "So when this opportunity came in Elkins, I felt this was a place that needed me as bad as I would be [needed] in my hometown."

West Virginia is medically underserved, Berzingi explains. "A small population is scattered over a large area. The resources are not available. ... That's how I see my own country back home, where, if you can believe it, we didn't have heart catheterizations until the early 2000s. In Elkins, when I went down there and still [to this day], they didn't have the sophisticated and advanced medical procedures that these populations badly needed."

Berzingi has come to see his work in Elkins as part of his duty as an American citizen. "What made us come to the United States in the first place and go down to Elkins was a sense of belonging and citizenship. ... In Elkins, I found a place that provides me with fulfillment."