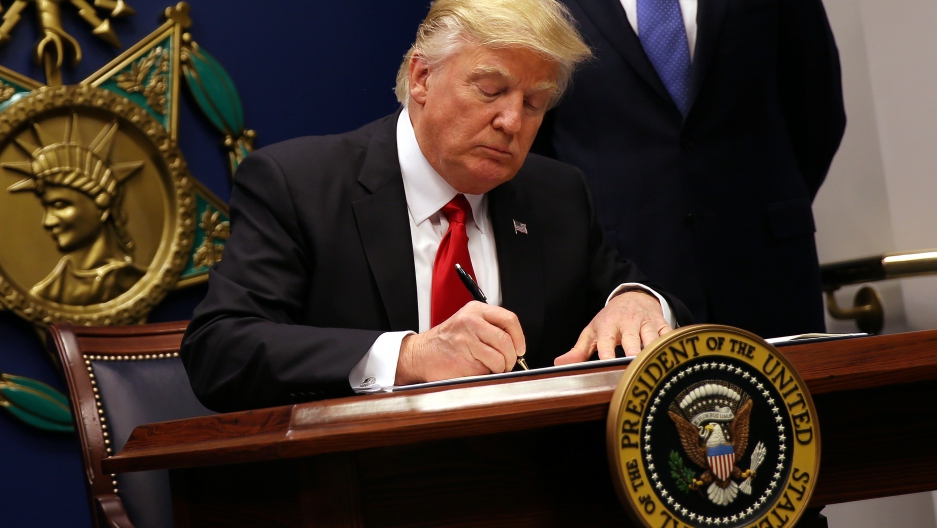 President Donald Trump signs an executive order to impose tighter vetting of travelers entering the United States, at the Pentagon in Washington, DC.

President Donald Trump has spent the past two weeks issuing a spate of executive orders that are stunning in their reach.

There's nothing unusual about the executive orders in and of themselves, of course. Presidents have been signing them since George Washington was in office.

But the problem, says former ambassador and White House official Stuart Eizenstat, is the "rapidity, breath and lack of interagency coordination."

Eizenstat says Trump is churning out executive orders at a breakneck pace without consulting affected agencies, legal experts or cabinet members. His cabinet, Eizenstat points out, isn't even fully in place: "[Trump] knows the confirmation process can sometimes take a matter of weeks, and [he] wanted to get out of the box as quickly as possible."

Eizenstat held high-level positions in both the Carter and Clinton administrations. He watched Carter sign a controversial executive order his first day in office, pardoning Vietnam War draft dodgers. Eizenstat emphasizes that he is not against unilateral executive action. "Executive orders are a very good way at the beginning of an administration of showing direction," he says.

Trump's executive orders are dramatic and transformative. He has put a temporary halt on refugees, revived plans to build controversial oil pipelines, set the stage to repeal Obamacare, authorized a wall on the border with Mexico, and banned funding for abortion overseas. But historically speaking, Trump's orders are far from the most consequential.

Trump, by contrast, has been moving so quickly that "the normal interagency process that would flag problems hasn't existed." Take the immigration and refugee ban, for example. "Green card holders were initially swept up, the Department of Homeland Security wasn't consulted. There was no secretary of state in place, although this has a very real impact on our foreign policy."

Eizenstat is concerned about what the ramifications will be for the country. "I've worked in the White House in two [administrations]. And to me, process is very important. A good process does not assure a good result," Eizenstat says. "But an inadequate and bad process, a short-circuited process, a process which doesn't touch base with the key departments, the key interest groups, the key congressional committees, is almost certainly going to be an imperfect decision."