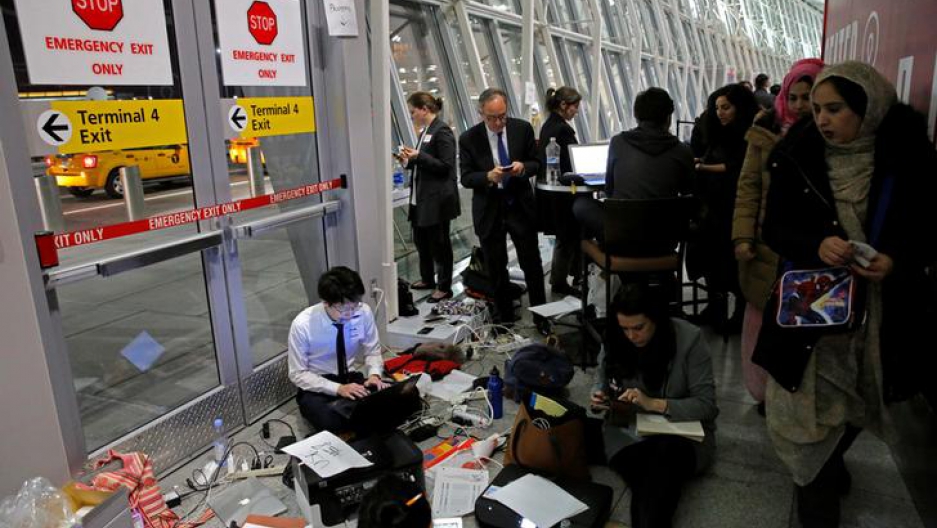 Women walk by a team of volunteer lawyers in their makeshift office working to assist travelers detained as part of Donald Trump's travel ban in Terminal 4 at John F. Kennedy International Airport in Queens.
Credit:

In short, travelers from seven Muslim-majority nations are barred from entering the US for 90 days. The flow of all refugees coming to the US has been halted for four months, and Syrian refugees are banned indefinitely. The immigration restrictions, enacted on Friday, have led to plenty of confusion at international airports and embassies.

Over the weekend, hundreds of people arriving at US airports were detained and handcuffed and interrogated about their visas or green cards. A handful of US communities were forced to scrap months of planning to take in refugee families, now that they're denied entry to the US. And, in response, thousands of protesters turned out at airports to show their opposition to the new immigration restrictions.

But the White House doesn’t seem swayed by the confusion and fear it has sowed among immigrants and legal green-card holders. President Trump tweeted that only 109 of some 325,000 travelers “were slowed down'' in their trips, and called that "a small price to pay'' for protecting the American people.

But it appears that far more than 109 people are impacted by these immigration restrictions, says Betsy Fisher, a lawyer with the International Refugee Assistance Project at the Urban Justice Center in New York. She has helped mobilize thousands of volunteer lawyers to assist stranded immigrants and travelers at international airports.

“We know that the United States is planning to admit 110,000 refugees this calendar year and has already admitted about 25,000. We also know that there are hundreds of people who are applying for admission based on their service and danger that they faced after they serve United States military in Iraq. So I would guess that the numbers are much higher than 109.”

The real impact, Fisher says, is not just on the folks who have been caught in airports in the short term. She points, for example, to the long-term effects of the new immigration measures on “people who have immediate family members in this country who can't come to the US, people who have surgery scheduled and can't come, and refugees who are fleeing from terrorism who will no longer be able to come over the next few months.”

For its part, the White House appears to be taking no blame for the confusion at US airports as security and customs officials reportedly were unprepared, or, at best uncertain, about implementing the new measures on such short notice. In some cases over the weekend, agents even detained people who presented green cards showing they are authorized to be living in the US.

Later, that procedure was reversed and green-card holders were allowed entry. Regarding the confusion and miscommunication, the President tweeted: “If the ban were announced with a one week notice, the 'bad' would rush into our country during that week.'' That was echoed by White House spokesman Sean Spicer who said that officials didn't want to "telegraph what you're going to do"' to people who might have rushed to airports to beat the ban.

“That is exactly not how the refugee program works,“ says Fisher. “Our clients who are fleeing from terror and violence wait through years of processing, years of security screenings, and the people who are being told that their flights are canceled, the people who have their status now in limbo indefinitely, have been waiting for years. There was no rush to the airport because this process is a yearslong wait.”

The implications of this temporary immigration policy, says Fisher, are wide-ranging and will profoundly impact “refugees who are fleeing from terrorism and violence.” In addition, she says this executive order “will have an effect not just for these 120 days but then also for a significant period of time after that. That's because there are so many security checks and medical checks [in place] for these people and those expire over time so after the 120 day passes, they’ll have to undergo additional screening.”