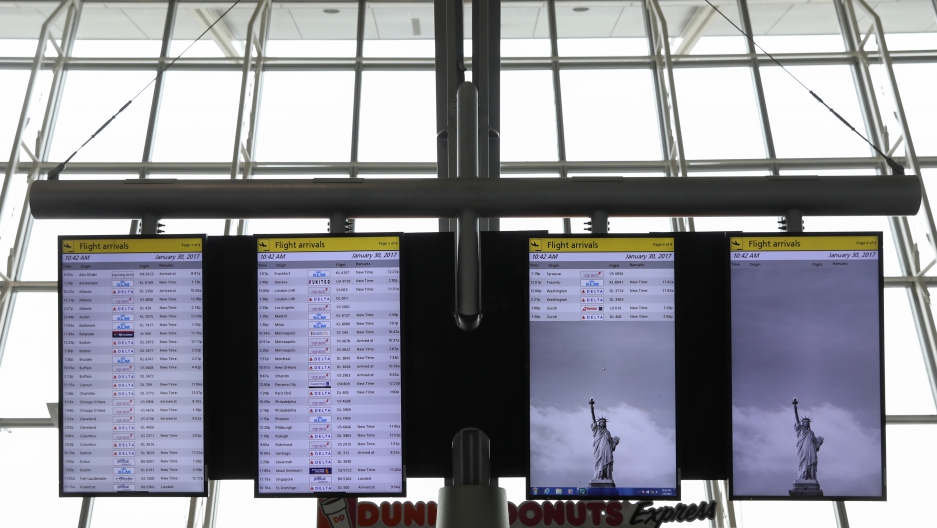 A photo of the Statue of Liberty is displayed on a flight schedule monitors inside Terminal 4 at John F. Kennedy Airport, in the Queens borough of New York City on January 30, 2017. For some US legal permanent residents, the uncertainty of what comes next is disappointing. “I was hoping that it was going to be welcoming enough if I follow the rules. Maybe in some part of the world things are chaotic, but this is the US,” says Denise Ajiri, who was born in Iran.

On Saturday morning I woke to texts from my friend Denise Ajiri, asking if I knew anything about this ban on green card holders from Iran, Iraq, Yemen, Sudan, Somalia, Libya and Syria. Ajiri is a data journalist. She loves facts and spreadsheets. I’ve never known her to panic.

“To be honest I am a bit worried…” she texted.

Here’s how it all played out over the weekend: On Friday evening, President Donald Trump signed an executive order banning travelers from these seven countries, as well as refugees from anywhere. Starting Friday night, refugees, visa holders and legal permanent residents were detained at airports or blocked from boarding flights in other countries. By Saturday evening, federal judges began putting temporary holds on parts of the order, ordering immigration agencies to allow those with valid visas and green cards to be allowed into the country, without detentions or extra screenings per the Trump directive.

Early Sunday morning, the Department of Homeland Security said it would comply with judges’ rulings, but also continue to follow the executive order. DHS Secretary John Kelly also issued a short statement affirming that allowing the entry of legal permanent residents is “in the national interest,” but will continue with “case-by-case determinations.”

White House Chief of Staff Reince Priebus told Meet the Press on Sunday that legal permanent residents would not be part of the ban, but that border agents still have “discretionary authority” to detain people traveling from these countries “when they suspect they’re up to no good.”

There is a lot of confusion about how this order will be implemented and challenged. So those outside the country, like Ajiri, are still worried.

When I spoke to Ajiri, she was in the small town of Melnik in the Czech Republic. Ajiri had gone to Czech to visit friends; she had landed only two days ago. When she first read about the executive order, she didn’t believe it. Only when she saw on Reuters that green card holders from those seven countries would be blocked for at least 90 days did she get nervous.

“I don't get the logic,” Ajiri explained. “I have been living and working [in the US] and I have been paying taxes, I have been studying there. I just don't know what else I should do.”

Ajiri has had a green card since 2011. She’s a journalist in her early 30s who left Iran in 2008 to work at Radio Free Europe, a massive news agency backed by the US government.

The Iranian government considers journalists who work for Radio Free Europe spies. So Ajiri and others like her cannot return to their countries of origin. The US government allows them to apply for green cards for this reason.

Ajiri moved to the US in 2013. She got a master’s degree in journalism from Columbia University and started working as independent journalist, a freelancer.

There are likely thousands of people like Ajiri. According to the Department of Homeland Security, around 500,000 people from the seven countries listed in the ban have received green cards in the past decade.

Right now, Ajiri is trying not to panic, but she is making backup plans. She has contacted a former police officer from the New York Police Department who she knows from her reporting. She’s checking the websites of American embassies and the US State Department. She’s planning to go to Radio Free Europe on Monday to see if they can do anything to help make sure she can return to the US.

She has a visa to be in Europe until mid-March. But after that, she’s not sure.

“The worst case scenario — I can’t go back to Iran, there is no way, so I don’t know. Maybe I should go to Turkey? I don’t know.”

Ajiri’s parents are US citizens. Her father is in Iran visiting family. He messaged her not to worry, that everything would be fine. Her mother is in Los Angeles, so Ajiri asked her boyfriend to call and make sure she was fine.

Ajiri says she understands that Trump wants to protect the country from terrorism, but she doesn’t understand why this was so sudden and why people who have been following the rules and waiting for years were suddenly told they can no longer come home.

“How else can I show that I am loyal to the country that I consider — that I was hoping to consider my home?”  she wondered. “I was hoping that it was going to be welcoming enough if I follow the rules. Maybe in some part of the world things are chaotic, but this is the US. Follow the rules, follow the steps and they are welcoming. This is the only time I am super confused. I feel like I am back in Tehran and things can change in a second.”

Today in a press briefing, White House press secretary Sean Spicer said that Trump’s view on security is that he wants to “get ahead” of terrorism. Over 90 days, he said, the administration will begin to put in place a system to “extreme vet” people from the seven countries and potentially more countries.

“You don’t know when the next threat is coming,” Spicer said. “The president is not going to wait. He’s going to do make sure he does everything in his power when he can to protect the homeland and its people.”

“If we announced this a lot earlier, it would have given people plenty of time to flood into the country who could have done us harm,” he said.

Currently, the vetting process for refugees and immigrants is lengthy. For Syrian refugees, for example, gaining permission to come to the US can take 18 to 24 months, and very few applicants are admitted. People seeking visas or green cards also go through long vetting processes.

Ajiri hopes that by the time she is supposed to come home, there will be more clarity to the order. It’s not the end of the world, she says. It just feels deeply unethical and unfair.