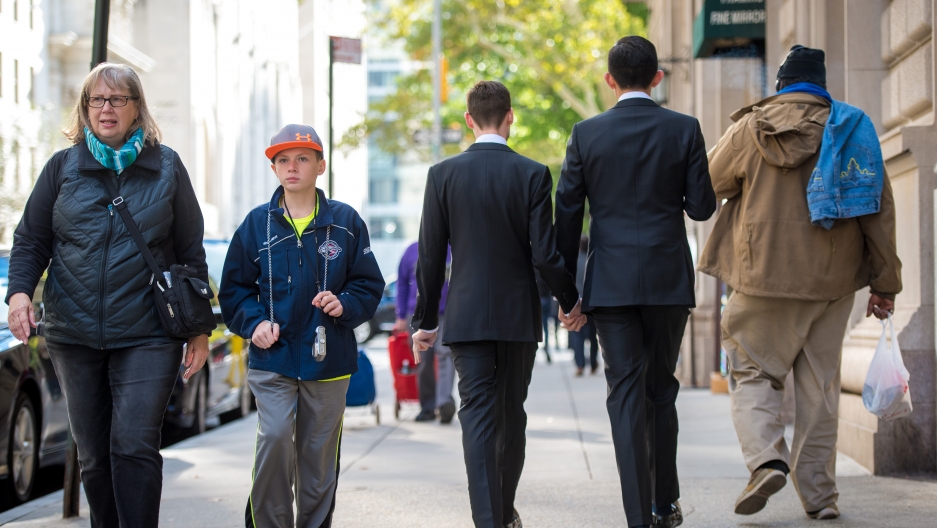 Luis Mancheno, in the suit on the right, walks down a New York street after marrying his partner. He says could not have survived, found love and made a life without the US accepting him. He escaped violence for being gay in Ecuador.

It was about 3 a.m. when I regained consciousness. I was in my car, with the engine still running, but I didn’t know where I was. The windshield was completely cracked and there was a light post that had smashed half of my car’s roof. My friend was siting in the back, still unconscious. Both of us had our pants and underwear down. There was smoke coming out of the engine in the front.

I pulled my pants up and I went out of the car. I looked at my half-destroyed car and the word “maricón” (Spanish for faggot) was painted across the car. I finally realized what had happened to me. Earlier that night, I had gone to a gay club with my friend to get a drink and dance. I could only remember the first 10 minutes at the club, until two guys started talking to us. Later, I would find out that we were drugged at the bar, taken to an ATM and made to withdraw hundreds of dollars, stripped naked and left unconscious, to die, in my car with the engine running while rolling downhill to a cliff. Luckily, the car hit a light post and we survived that night.

Completely desperate, I started yelling for help while tears burst out of my eyes. I screamed my lungs out, but nobody heard my cries, and nobody came to help us.

What was worse was knowing that I couldn’t call my parents — or even tell them what happened. For years, my Evangelical parents had tried to convert me into a heterosexual person, so I was too afraid of telling them that I had gone to a gay bar that night to hang out with my gay friend, and that because of it I was almost killed. They would have not felt bad for me. To the contrary, like they did many times, they would have used my pain to try to convince me that bad things were happening to me because God was punishing me for being gay.

Barely able to walk, the next day I stumbled to the local police station to file a report. Paintings of the Virgin Mary and Jesus hung on the walls. A police officer opened his notebook and took notes when I began to describe what happened to me. When I told him the name of the bar where I was — a gay bar — he stopped. He put his pen down and closed his notebook. Looking me straight in the eyes, he told me the police did not have jurisdiction over that bar, and that I had gotten what I deserved for going to that place. His colleagues, who had been silently listening, burst out in laughter. Terrified and ashamed, all I could do was turn around and leave.

That incident taught me that I was not safe in Ecuador — that it was only a matter of time before something like that would happen again, only with no light post to save me.

Several months later, I boarded an American Airlines flight to Miami. My palms were sweating, and I kept telling myself that everything was going to be OK. I made a choice to come the United States because I believed that it would be OK for me to be openly gay here. I was right — this country admitted me and granted me asylum. Because I am here, I was able to fall in love, get married, became a lawyer, and now teach at a law school. If I had been denied entry, like the hundreds of refugees you are denying entry to our country right now, I would be dead today.

Your executive order to ban refugees will kill people every day that passes until you repeal it. By rejecting refugees, and by banning people because of their nationality or their religion, you have betrayed the most fundamental values of this country and you have betrayed all of us. All of us Americans, old and new, who for centuries have believed in the idea that this country was a place forged by and for immigrants.

Also by Luis Mancheno: I know you voted for Trump for a better future. But please don’t forget my future.

What is worse is that you have shamelessly targeted our Muslim sisters and brothers and have demonized all of them for the bad acts of a few. It was radical Evangelicals and Catholics who were the ones who perpetrated acts of terror against me because I was gay. They forced me and others in my LGBTQ community to go through Christian conversion therapy and ignored my suffering. By your logic, people from mostly Christian nations should be banned from entering the United States or would have to be deported for not sharing the values of our country.

Try to imagine the desperation I felt when I came out of my car after being drugged, abused, and almost killed, just because of my sexual orientation. I had nobody to turn to, and the only thing that kept me going was to know that in the United States, things could be different for people like me.

Your executive order has slashed the hopes of thousands of people who, like me, are only able to keep going because our country’s values give them hope. If you really want to make America great again, then get rid of that order — today.

A decade has passed since I was the victim of that horrible hate crime in Ecuador. I am now a US citizen. When I became a citizen I took an oath to defend the Constitution of this country against all enemies, foreign and domestic. If you do not repeal this order, I swear that I will uphold my promise by defending the Constitution from you.

Luis Mancheno is an immigration attorney and a clinical teaching fellow in the Kathryn O. Greenberg Immigration Justice Clinic at the Benjamin N. Cardozo School of Law in New York, where he represents non-citizens in immigration and federal court.