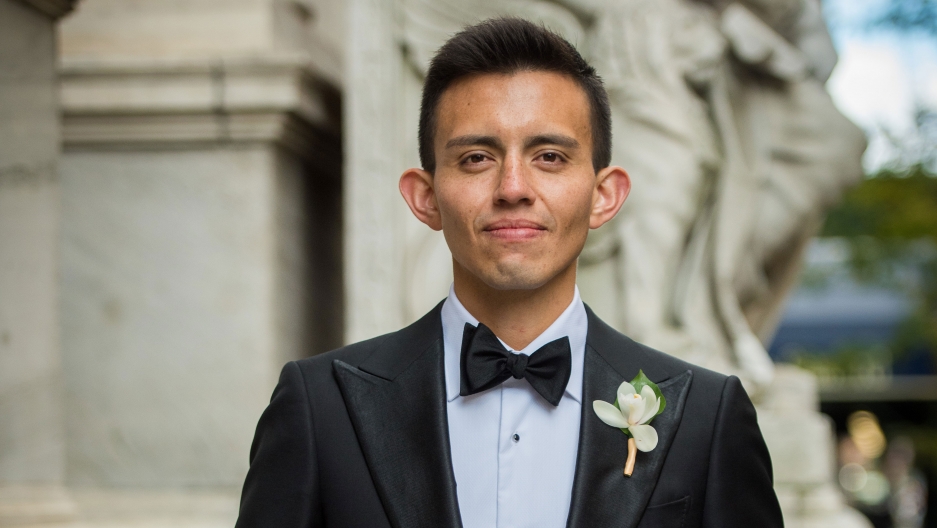 Luis Mancheno (pictured) married his husband on October 17, 2016, just over a year after the Supreme Court legalized gay marriage nationwide. “Getting married to me meant to finally be free,” he says.

I opened my eyes this morning and I found my husband holding my hand and sobbing.  While wiping his tears and trying to make him feel better, I realized what troubled him.

During Donald Trump’s presidency, he will nominate one or, if the chance arises, several conservative Supreme Court justices. Trump doesn't agree with the 2015 ruling that legalized gay marriage nationwide. His justices, given a chance, may take away my right to be married to the person I love.

Trump has also pledged to pass the First Amendment Defense Act during the first 100 days of his administration. The law prohibits the government from taking action against anyone who “believes or acts in accordance with a religious belief or moral conviction that marriage is or should be recognized as the union of one man and one woman.”

While traveling through a Mexican airport recently, an officer refused to recognize my husband and I as a family unit and humiliated us in front of dozens of travelers. He made me stand away from my husband while yelling that I couldn’t do whatever I wanted in “his country.” I was furious and I wanted to do something about it, but I knew that Mexico was not my country and that the law was probably behind him.

Should I worry about the same thing happening in the US soon? Is this not my country too? Were you thinking that electing Trump was going to cause me this doubt?

As Trump was winning Tuesday night, I started having flashbacks to the times when I was attacked for being gay. On one occasion at a high school get-together in Ecuador, where I grew up, I was cornered in a bar by two of my straight “friends.” One of them pulled my shirt and the other pushed me against the wall with both of his hands. I couldn’t move. He put his face really close to mine and, almost touching my mouth with his, told me that people were saying I was “a faggot.”

He wanted to confirm it though because he didn’t want to be seen hanging out with a faggot. I was terrorized and I lied to him, saying I was straight and that I was attracted to women.

Will I feel compelled to lie again? On Wednesday, I lost the feeling of freedom that comes with knowing that I don’t have to lie about my sexual orientation. Vice president-elect Mike Pence has vowed in the past to direct public funds to “conversion therapy” for people like me, a practice banned in five states. 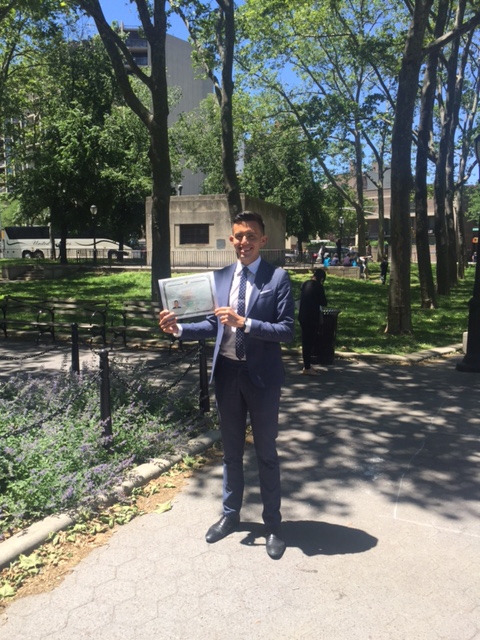 Luis Mancheno outside the US Court for the Eastern District of New York, carrying the certificate that declares he is a US citizen. June 10, 2016

I wrote in June, after I became a US citizen, that I finally felt that I could wear makeup and walk down the street without feeling afraid of being harmed. Today, I no longer believe that. When you were casting your ballot, were you aware that your vote could change my life this much?

I am not only afraid for me though, I am also afraid for my fellow immigrants. People who came to this country looking for a better future and today feel more unwelcome than they have ever felt. Recently, I have met so many talented and ambitious people who have been granted Deferred Action for Childhood Arrivals (DACA), a special form of quasi-immigration status that gave undocumented young people brought here as children work authorization and temporary permission to stay in the US.

As Trump gave his celebratory speech, each one of their faces came to my mind. Trump has pledged to take away DACA and deport these young people. My heart ached as I thought about their broken Spanish — the US has been their home for the majority of their lives. Did you want people like them, incredibly smart and talented who are making enormous contributions to our country, to be deported? Would you be able to tell any of them to their faces to go back to the place where they were born — yet they don't even know?

Last Christmas, I went grocery shopping with my father-in-law at a store in West Virginia. I was the only person of color in the store and could not have stood out more. There were friendly and curious stares, but there were some that burned. Like the stare of your teacher in elementary school when you did something wrong

Because the KKK and other white-supremacist groups supported Trump’s candidacy — and because he launched his campaign by calling Mexicans rapists and criminals — I am more afraid than ever to go back to that store. Have I done something wrong? Should I only go to places for people of color? I don’t think you intended to make me feel like this when you voted from Trump Tuesday, right?

Now, you also understand that many people out there did support Trump because they want to undo my marriage, discriminate against me for being gay and take away work authorization from bright children raised here. But you will stand up for us, right?

When I was in elementary school, I was overweight, too tall and had big ears. People constantly made fun of me and bullied me in and out of class. I had no friends. At 10, I somehow became friends with the most popular kid in school: Miguel. He was smart, cool and talented. Everybody respected him. When he became my friend, Miguel defended me against the people who made fun of me. He understood that making fun of my weight or my appearance was wrong and ridiculed those who did it. He protected me.

I am afraid that my life will be really hard during the years to come, but you will stand up for me like Miguel did, right? You will stand up against discrimination and bullying. You will protest with me when Trump tries to deport 11 million people — our neighbors, classmates, co-workers, friends and family members — regardless of their circumstances. When he tries to take away my right to marry, you will be there to protect me, right?

Trump said in his acceptance speech: “Every single American will have the opportunity to realize his or her fullest potential. The forgotten men and women of our country will be forgotten no longer.”

Luis Mancheno is an immigration attorney and a clinical teaching fellow in the Kathryn O. Greenberg Immigration Justice Clinic at the Benjamin N. Cardozo School of Law in New York where he represents non-citizens in immigration and federal court.