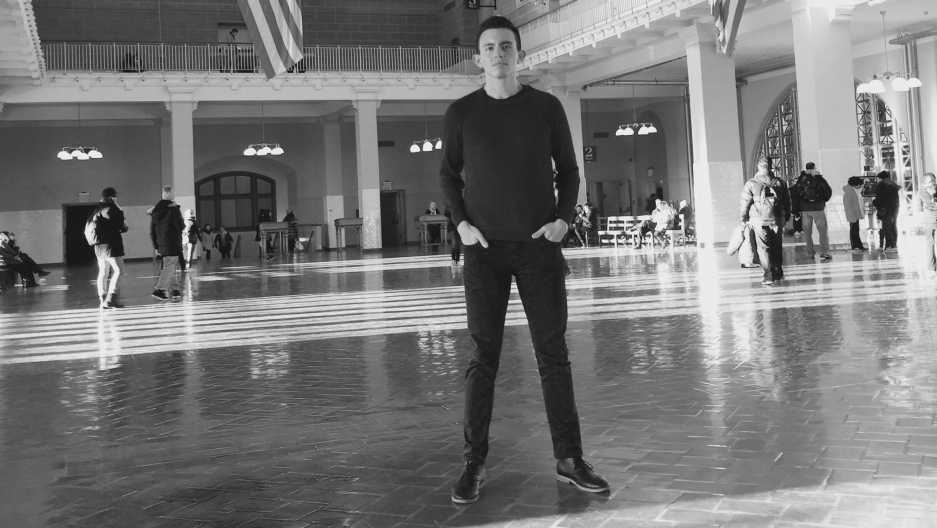 Luis Mancheno visited Ellis Island in December, 2015. "For me being in Ellis Island was to be connected to the millions of immigrants who had come before me and to understand how similar we all are," he says.

About 16 years ago, I realized that I was gay and because of it my days living in Ecuador were numbered.

So I started working on an exit plan. At 14, I started forcing myself to watch movies in English because I knew that English was going to be my way out of Ecuador. At 18, I was outed to my parents and for three years I endured horrible physical and psychological abuse from them and others for being gay.

I was desperate, so by 22, I packed my bags and fled. I arrived in the United States on July 31, 2008 with very little money in my pocket but with hopes of finding safety and being able to prosper without having to hide my sexual orientation. I was persecuted in my home country and afraid of returning, so I applied for refugee status a few months after I arrived in this country. Almost a year later, the US government approved my application and I was allowed to remain here.

I was finally safe.

Eight years later, on June 10, 2016, I became a US citizen and gained the privilege to vote for the future of my country. My right to vote couldn’t have come at a better time.

More than ever before, as a Latino immigrant, I have felt the heavy burdens of the color of my skin and my national origin. There are days when I walk on the street and I actually wonder if people see me and think that I should be deported because I don’t have the ingredients that make a “true American.” I am not white, Christian or heterosexual, and I was not born here. I have no place in the “great" America that Republican nominee Donald Trump seems to want to build.

As an immigrant, the rhetoric has made me wonder if maybe I should lay low and simply be grateful that “true Americans” are allowing me to stay.

Suddenly, the feelings of not belonging that I had in Ecuador have returned with force. Although I understand well that these insults and attacks do not reflect the majority of the people in this country — at least according to the polls right now — they still deeply affect many of my actions on a daily basis.

There are times when I have had second thoughts about speaking Spanish when out in the street. The only time that Trump has spoken Spanish, after all, was to talk about “bad hombres.” More than before, I am self-conscious about my foreign accent when I speak English. When people asked me, “Where are you from?” — the question so many of us “others” get so often — I used to say Ecuador. Now, inexplicably, I find myself claiming “New York.” 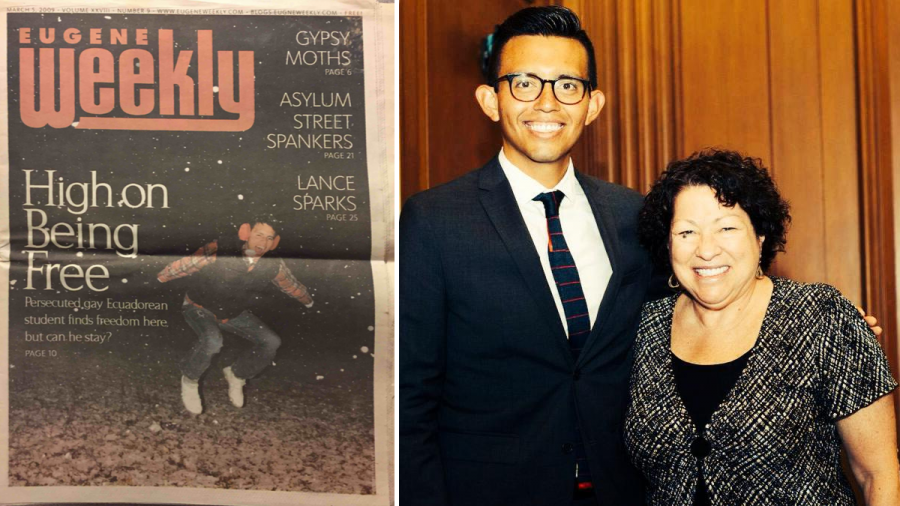 Luis Mancheno fled Ecuador in his early 20s. It took a year for him to find out if the US would let him stay. While he was waiting, in 2009, the Eugene Weekly published a story about his journey. In September, 2014, after he became an immigration lawyer, he met Supreme Court Justice Sonia Sotomayor, whom he admires greatly.

Sometimes it feels that no matter how successful I am, how many years I have lived here, and how much I have contributed to this country, I will never be like the rest. I will never pass as American — definitely not in the Trump America. It is the same feeling I had in Ecuador when I wore tight pants, spoke with my hands or did anything that could out me as a gay man. It was a feeling of not belonging, a feeling that being different was bad.

As with my sexual orientation, I cannot do anything to change the color of my skin or the fact that I was born outside of this country. And, even though I have tried for these past 16 years, my accent is not going anywhere.

But there is something I can do: I can use my voice to tell my story and attempt to convince as many Americans as possible to go to the polls and vote thoughtfully.

My first job in the US was watching cars in a parking lot from midnight to 6 am in Salem, Oregon. I made sure the cars were not broken into or vandalized. Today, I am an immigration lawyer and I teach at a law school — not a “bad hombre,” whatever that means.

About a month ago, I was talking to one of my closest clients. Her name is Ana and she is a 60-year-old grandmother from Mexico who sells tamales in the Bronx and who happens to not have valid immigration status even though she has lived, worked and paid taxes in this country for over 15 years. The election came up during our conversation and at the end she said, “Vota por mi.” Vote on my behalf.

When I go to vote, I will be thinking about Ana because I still believe in this country, which accepted me eight years ago. I strongly reject idea that people like Ana, or anybody really, should live their lives in constant fear of deportation. I believe that this country is great because it has been shaped by the work and lives of millions of people who have arrived year after year at its borders, many fleeing poverty, oppression, persecution, torture and death. It has been the hard work and courage of these people that has made this country great. To close the door to them would be to betray all of the immigrants who believed in this country since its founding and gave their lives to build it.

Being forced to leave the country where one was born and raised is one of the toughest experiences a person can go through. For me, not being able to grow up with my sisters, see my niece being born, or take care of my father when he died with cancer, are some of the hardest sacrifices I made in exchange for the American dream. I am confident, though, that those sacrifices were not in vain and that my country will tell me next week that I am still welcome. That others like me are still welcome.

This time around though, I am not a victim. I won’t be pushed around and I won’t lay low. I am an American and my vote is my voice. And when I vote next week, I will be saying loud and clear, this is also my country.

Luis Mancheno is an immigration attorney and a Clinical Teaching Fellow in the Kathryn O. Greenberg Immigration Justice Clinic at the Benjamin N. Cardozo School of Law in New York where he represents non-citizens in immigration and federal court.