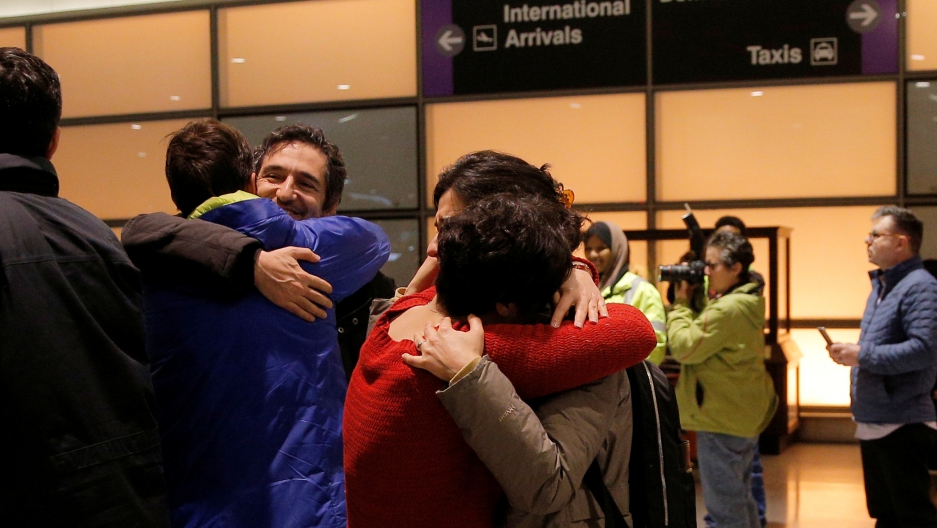 Mazdak Tootkaboni (second from left) is reunited with friends and family after he was separated from other passengers and questioned as a result of President Donald Trump's executive order on immigration, at Logan Airport in Boston on January 28, 2017. Tootkaboni, an Iranian with a US green card, is a professor at the University of Massachusetts Dartmouth.

President Donald Trump’s executive order banning refugees and migrants from seven Muslim countries is stirring chaos across the Detroit metro, a part of the country known as the Arab capital of the US for its large and long-standing Arab American communities.

At the center of the chaos are the attorneys who are fielding calls from families of Muslims who have been stopped at airports or stranded in other countries.

“Everyone has been trying to calm their clients since Donald Trump became president-elect,” says immigration attorney Carine Saleh. “Now it’s worse. People feel scared, immigration attorneys are scared and personally, I’m in shock. For weeks I’ve been telling my clients not to worry or be afraid. I can’t tell them that any more.”

Attorneys in Michigan say they will remain vigilant as cases opposing the executive order move forward.

“No one with valid documents should be refused entry into the United States,” says Susan Reed, managing attorney of the Michigan Immigrant Rights Center. “We will be watching.”

The executive order that Trump signed Friday gave federal agencies broad power to detain or deny entry to anyone arriving as a refugee from any country or as an immigrant of any kind from the so-called “countries of concern.” Late Saturday, the State Department said this includes people holding dual-citizenship from a country of concern and another country that is not the US.

White House Chief of Staff Reince Priebus told Meet the Press on Sunday that legal permanent residents would not be part of the ban, but that border agents still have “discretionary authority” to detain people traveling from certain countries “when they suspect they’re up to no good.” He also said that the ban could include more than the seven countries currently listed.

For Saleh, the confusion and uncertainty of what this order means, is not just a professional nightmare. Her cousin and his wife were detained Saturday in Florida after returning from a winter vacation. “My cousin Mike is American, his wife Mina has a green card, and she was still detained,” says Saleh.

News of Trump’s four-month ban on allowing refugees into the US and temporarily barring travelers from seven Muslim-majority countries had not yet reached the Royal Caribbean cruise ship the Masri’s were on when they disembarked. “When we got to the dock, customs officers took me into another room,” says Mina Eldirani, who was born in Iraq but is a national of Sweden.

As a legal permanent resident in the US, also known as a green card holder, Mina says she felt confused and afraid while being bombarded with questions. Her husband had to wait outside.

Lawful permanent residents are immigrants who have been officially granted immigration benefits, which includes permission to live and work in the US. The Trump administration had said this order applies to immigrants, regardless if they hold green cards or temporary visas, from Iraq, Syria, Iran, Sudan, Libya, Somalia and Yemen.

“They asked me where I was born, when did I leave Iraq, how did I come to America, who sponsored me, what does my husband do, and what countries have I lived in,” says Mina.

After three hours of questioning, Mina was finally let go. “I was the in same room as someone being accused of child pornography,” she says. “That’s how low they made me feel, just because I was in Iraq 27 years ago.”

Saleh has had to help dozens more clients in similar situations.

“I had to answer a multitude of inquiries, including power of attorney questions from clients who want to give legal authorization to family members to care for their children in case they get rounded up and deported,” Saleh says.

Reed, of Michigan Immigrant Rights Center, says, “People are not being rounded up and deported that we know of, but if Trump signed the ban, what’s next?”

Reed spent her weekend typing out information and having it translated into Arabic. She reached out to Arab leaders to offer her support, then began calling pro-bono attorneys to help those affected. But the rollout of this order has caused confusion for travelers, advocates and government officials.

“I’ve been calling friends in Canada to help house people who are stranded. We [Michigan] are at an international border, our staff went to the Windsor Tunnel and got no information from US Customs and Border Protection,” Reed says. “We are left in the dark like everyone, reading news and press releases.

The five attorneys in Michigan PRI spoke to for this story expressed shock at what is happening to green card and visa holders. They advised travelers not to sign any forms giving up their immigration status if they are in the custody of federal agents.

“Some of the people with green cards are people who have been granted special immigrant status with the right to live and work in Michigan because they provided help to the US government during the Iraq war,” Reed says.

Also: Translators who worked for the US military in Iraq wonder if their American dream is slipping away

The 40 nonprofit organizations that Reed works with feel that they have been left with no other recourse than to blast a warning out across the state. On Saturday they sent an email that advised “anyone who is not a US citizen who has any status from Iran, Iraq, Libya, Somalia, Sudan, Syria, Yemen should not travel outside of the United Sates for any reason, even to Canada. Legal permanent residents are also subject to ban says Homeland Security.”

The Department of Homeland Security released a statement early Sunday morning saying it would comply with judges’ rulings, but also continue to follow the executive order. A DHS official told ABC News late Saturday that so far 375 travelers have been impacted. 109 were blocked from entering the country on arrival and 173 prevented from boarding flights to the US. Eighty-one people, ABC reports, were granted waivers to enter as legal permanent residents or because they have special visa status.

The DHS statement said travelers who were questioned and detained were “inconvenienced while enhanced security measures were implemented.”

Attorney and former Michigan State Representative Rashida Tlaib says while the temporary restriction on Trump's directive is a step in the right direction, “no one with valid documents for entry should be refused entry into the United States, and we will be watching and marching in the streets until this is no longer a permanent policy in our country.”