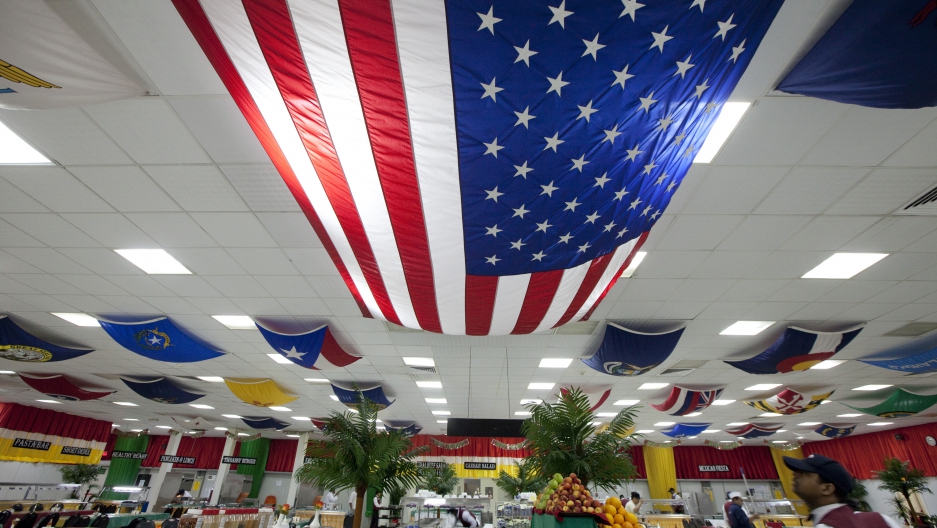 A US flag hangs over fake palm trees inside the compound of the US embassy in Baghdad in 2011.

President Donald Trump's talk about suspending the flow of refugees into the US hit Farah Marcolla hard.

The Iraqi linguist who worked side by side with US troops in Baghdad put her life on the line for America's war effort.

Now her family is in danger back in Iraq, and she fears her efforts to get them to safety in America are all but doomed.

"I'm scared. The chance to see my family reunited again is very slim now," she says. "People like me and my family who helped and supported America, I believe we should be reunited. The history of the United States is to support people and help them, not to separate the families."

Marcolla was just 18 and living in Baghdad shortly after American tanks rolled into the Iraqi capital in 2003. She was recruited to work for the US military. Her role caught the attention of Iraqi militants. They sought revenge. They burned down Marcolla's house, kidnapped her father and murdered her husband.

Fearing for her life, she applied for a US visa. And in 2013, after seven years of waiting, she received the permission she'd been waiting for. But Marcolla had to leave her parents and siblings behind, even though she says they too were in danger because of her service with US troops.

She says she tries to talk with her family in Baghdad daily.

"Every day their lives are in danger," she says. "They have to change their address, move from place to place. They live in the unknown."

Marcolla is worried that the refugee ban Trump proposed Wednesday means her parents and siblings will never reach American soil.

"We already been in extreme vetting," she says. "I understand and I respect the US rules and the safety and the national security ... I understand that and I respect that. However there are people in Iraq who have a long history of supporting America in Iraq and Afghanistan — the linguists, the translators — they deserve and they need their papers to be expedited."