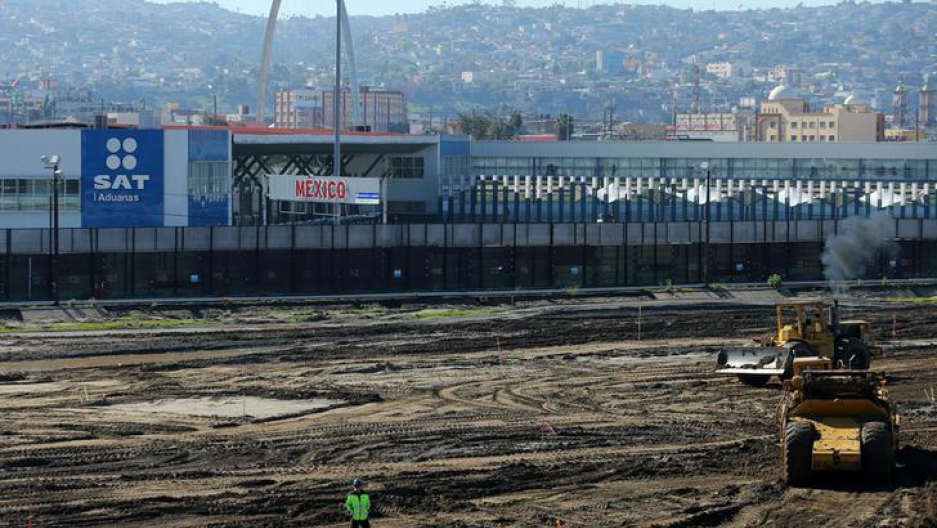 Construction on the area around the port of entry from Mexico to the United States continues next to the border wall in San Ysidro, California, January 25, 2017

This week at a ceremony at the Department of Homeland Security, President Donald Trump signed an executive order to begin work to "build a large physical barrier on the southern border," according to the White House.

The move is not especially welcome in Mexico, in part because Trump has vowed to make Mexico pay the cost of building the barrier. The timing, too, is interesting because it comes as Mexico's foreign and economic ministers are meeting in Washington to prepare for Mexican President Enrique Peña Nieto's own visit to the capital next week.

“A lot of Mexicans here have the same questions [as] people do in the United States,” says The World's Monica Campbell, who is based in Mexico City. “How do you force a country to cough up billions and billions of dollars for something that really is not in their interest? There is not really any support here in Mexico to build a bigger wall or a longer wall between the United States and Mexico.”

With key diplomatic meetings coming up in Washington, Campbell says many Mexicans and Mexican Americans are hoping the Mexican government officials will stand firm against Trump and have a more constructive conversation about "how our countries can work together instead of building this wall that polarizes us even more.”

So far Peña Nieto has said there will be "neither confrontation nor submission" when it comes to negotiating with Trump on trade and immigration.

But it will be a tricky negotiation, says Campbell. “Peña Nieto has to walk a fine line. At once, he has to stand firm and on the other hand there's this idea of trying to start off on the right foot with the Trump administration.”

His political mission is made all the more difficult by Mexico’s own set of severe economic challenges including high inflation, rising gas prices and an overall lack of public confidence that the Mexican president can rise to the challenge and step up and defend Mexico’s interests in the face of the executive orders that Trump is advancing in his push to “make America great again.”

If the wall does get built, it will surely change a lot of lives in the Rio Grande Valley in Texas. Democrat Henry Cuellar represents that district in Congress. Cuellar says he agrees with the president's impulse, but not his solution.

“I want to make sure we have a secure border, which means that we get more border patrol, more technology, camera sensors, to make sure that we secure the border,” he says. But at the same time, Cuellar is calling for a closer working relationship with "our Mexican friends."

In addition, he says, “over 40 percent of the people that we have in the US without documents came in through a legal permit or visa, so a wall is not going to stop them... We have to be careful on how we address this and not spend $6.5 million per mile for a fence as proposed, when we can do this with one mile of technology, each mile costing one million dollars by comparison.”