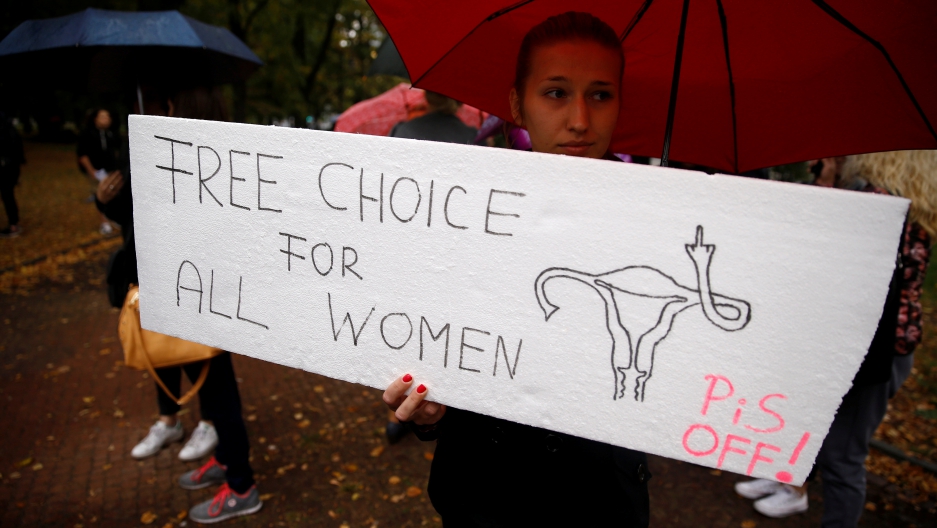 A woman holds a placard in an abortion rights campaigners' demonstration to protest against plans for a total ban on abortion in front of the Palace of Culture in Warsaw, Poland, October 3, 2016.

The Netherlands this week called for an international fund to support health centers offering abortion services in developing countries, after US President Donald Trump ordered a halt to US government financing.

Trump on Monday signed a decree barring federal funding for foreign NGOs that support abortion, on the eve of the 44th anniversary of the Supreme Court decision that legalised the practice in the United States.

They are also barred from engaging in advocacy to promote abortion.

Lilianne Ploumen, the Dutch minister for foreign trade and development cooperation, said the Netherlands must do everything in its power to offset the ban, so "women can remain in control of their own bodies."

"We have to compensate this financial setback as much as possible with a well-financed fund, in which governments, businesses, and social organisations will be able to donate," Ploumen said in a statement released late Tuesday.

She added that "banning abortion leads not to fewer abortions, but to more irresponsible practices in back rooms and higher rates of maternal mortality."

Ploumen specifically mentioned Marie Stopes International, an organisation that she said will be greatly affected by the loss of funding.

She said that over the next four years, the loss of funding to Marie Stopes will result in 6.5 million unwanted pregnancies, 2.2 million unsafe abortions, and 21,700 unnecessary deaths of mothers.

Dutch support of women's organizations, she said, has prevented 6 million unwanted pregnancies and half a million abortions.

"The US decision threatens to undermine these results," said Ploumen, who added she was "very disappointed" by the decision. "We cannot let that happen."

Trump's move came just two days after women led a massive protest march in Washington — with satellite rallies across the country and around the world — to defend their rights, including to abortion.