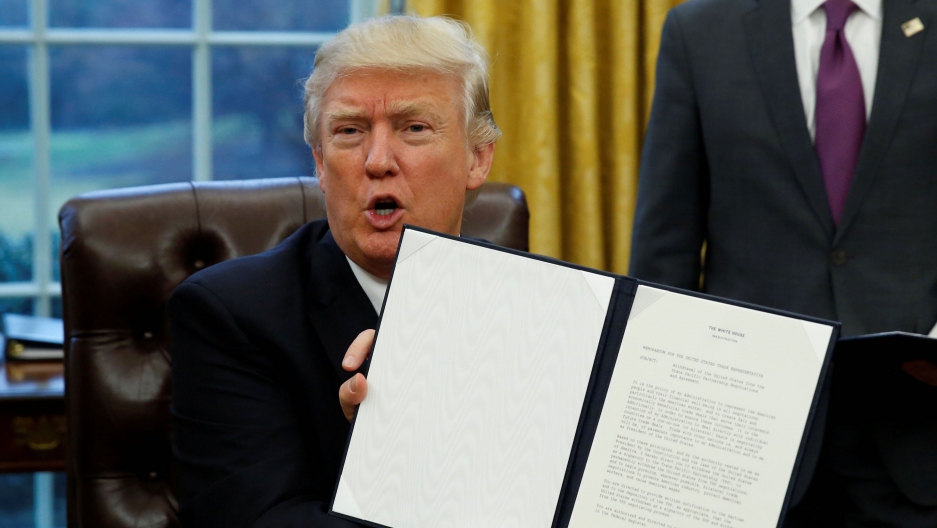 US President Donald Trump holds up the executive order on withdrawal from the Trans-Pacific Partnership after signing it as White House Chief of Staff Reince Priebus stands at his side in the Oval Office of the White House in Washington, DC, on Jan. 23, 2017.

Kevin Lamarque/Reuters/TPX Images of the Day

President Donald Trump moved Monday to pull the United States out of the Trans-Pacific Partnership, making good on a pledge to scrap a deal he denounced as a "job killer" and a "rape" of US interests.

Embarking on his first full week in office, the 45th US president began rolling out his policy agenda after a tumultuous first weekend for his administration by signing a series of executive orders.

Among the first was a memo on withdrawing from the vast TPP trade pact, which aimed to set trade rules for the 21st century and bind US allies against growing Chinese economic clout.

"We've been talking about this for a long time," Trump said as he signed the executive order in the Oval Office.

"Great thing for the American worker what we just did."

Promoted by Washington and signed by 12 countries in 2015, the TPP had yet to go into effect and US withdrawal is likely to sound its death knell.

The real estate mogul's White House bid was fueled in part by a pledge to overturn trade deals — such as TPP and the North American Free Trade Agreement — that he says have drained US jobs and destroyed its industrial heartlands.

Trump also signed two other orders — on freezing the hiring of federal workers and hitting foreign nongovernmental organizations that help with abortion.

The Republican leader is looking to shift attention firmly back onto his policy agenda after a first few days that put his incoming administration on the back foot.

"Busy week planned with a heavy focus on jobs and national security," he tweeted early Monday.

Since he was sworn in on Friday, Trump's White House has been pilloried for lying to the public about inaugural crowds and over a campaign-style speech by the president before a memorial to fallen CIA officers.

On Saturday, several million Americans poured onto the streets for women-led demonstrations against Trump, the scale of which were unseen in a generation, in a potent rebuke to the president.

Trump has upbraided top aides over unfavorable media coverage on everything from crowd sizes to suggestions he has ruled out releasing his taxes. He is the first presidential candidate in recent memory not to do so.

On Sunday, the president vowed to swiftly start renegotiating NAFTA in upcoming talks with the leaders of Canada and Mexico.

Trump has already moved to curb Obama's health care reforms and quicker legal tweaks — in the form of executive orders — are expected on immigration and limiting environmental legislation.

But more substantive changes will need buy-in from the Republican-controlled Congress.

On Monday, Trump was hosting separate meetings with business leaders, unions and members of both houses of Congress.

He will also meet the speaker of the House of Representatives, Paul Ryan.

Tax reform is likely to be high on the agenda.

"What we're doing is, we are going to be cutting taxes massively for both the middle class and for companies, and that's massively," he said.

"A bigger thing, and that surprised me, is the fact that we're going to be cutting regulation massively."

Reform of Obama's health care laws is also likely to be on the menu.

Trump has publicly promised that none of the tens of millions of Americans who obtained health insurance under Obama will lose it.

That makes any meaningful changes difficult to pay for.

But the more urgent task for Trump may be to keep always skeptical establishment Republicans on board the "Trump train."

Trump's approval rating is around 40 percent, according to the RealClearPolitics average, low for a president just starting out.

That could make legislators think twice about toeing the line with an unpopular leader.

But Trump's bare-knuckle style has also kept dissent in check, with some terrified they will become the object of a presidential tweet that sets off a world of political pain.

Sen. Ben Sasse was among the few who had mild criticism for Trump's decision on the Trans-Pacific trade deal.

"It's clear that those of us who believe trade is good for American families have done a terrible job defending trade's historic successes and celebrating its future potential," he said.

"We have to make the arguments and we have to start now."

On Thursday, Trump will travel to a Republican Congressional retreat in Philadelphia to further build ties.

The following day, he will host British Prime Minister Theresa May — the first White House visit of a foreign leader under the new administration.