Seven years ago, Mark Chung took a three-week vacation. When he came home, his electricity bill looked more than a little off.

So he called his local utility and said there’s something wrong with my meter.

“And they’re like, ‘Oh, no, we’ve had these smart meters rolled out for a few years now. Everything is fine.’”

His response: “Well, can you tell where I spent the electricity?’”

The utility’s response: “On your house.”

Not the most helpful answer.

But Chung was trained as an electrical engineer at Stanford University. So what does he do? He goes to Home Depot.

“I bought these kilowatt meters that they had on the shelves, they’re like $10. We hacked them to be Wifi enabled, then I plugged them throughout my house. And I couldn’t find anything that was an anomaly,” says Chung.

So, Chung took things to the next level and built an electrical map to monitor every appliance, every piece of machinery, every light in his house. And he found the problem: the pool pump had some broken rotor bars.

“Even though it was running at the same schedule that it was before, it was just consuming a lot more energy to do the same amount of work.”

If Chung could map his house, why couldn’t he scale things up and map a factory, a hospital, or a hotel that uses A LOT of energy. So, Chung left his day job and launched a company he named Verdigris. NASA was one of his early backers.

To head off the worst impacts of climate change, to keep the temperature increase below 2 degrees Celsius relative to pre-industrial levels, scientists warn that we need to cut global carbon emissions by 40 to 70 percent by mid-century. There are two basic ways to get there: Replace fossil fuels with renewable energy sources. And/or, we can use a lot less energy. Verdigris focuses on that second solution by making buildings smarter.

Which leads us back to that pool pump: How did Chung isolate that as the electricity sucking source? How does Verdigris map every electron that a building uses?

In Scotland, about 15 miles west of Edinburgh in the city of Livingston, the company Jabil is using the Verdigris system in its 125,000-square-foot factory. Jabil is a worldwide company that builds electronics parts, the stuff that goes inside your brand-name radios, TV and computers. (Jabil is also an investor in Verdigris.)

The factory’s facilities supervisor, Robbie Graham, opens an electrical panel box with dozens of wires. Each wire has a small clamp around it that can measure the flow of current around 8,000 times a second. 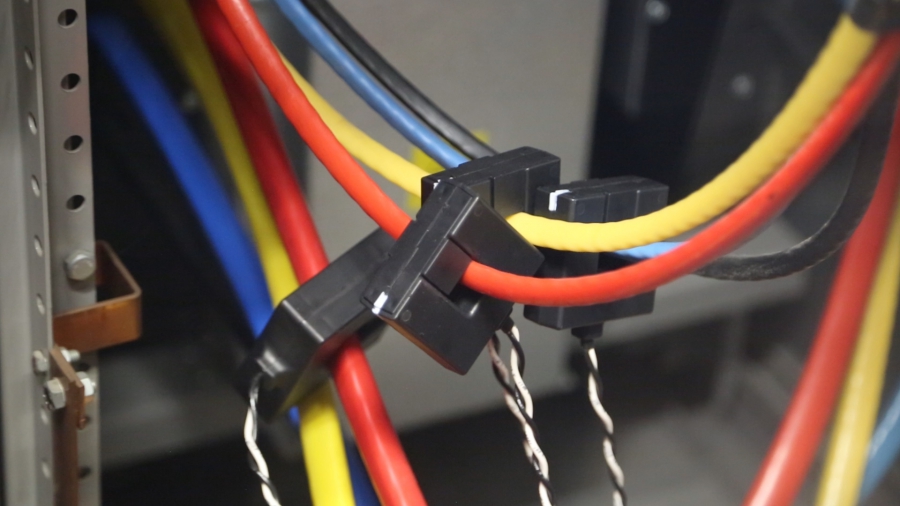 Sensors can measure the electrical output of machinery at the Jabil factory in Scotland.

Graham knows which wire goes to which piece of machinery. For example, pointing at one he says, “These wires go to my air handling units on the roof.”

On the roof, Neil O’Loughlin, Jabil’s facilities lead in Scotland, picks up the tour.

The roof is littered with massive fans. The clamps around the wires downstairs collect information about these fans — how much electricity each of these units use — then sends that data to the cloud.

O’Loughlin says before Verdigris was installed, “We would have no idea, whereas now, you’re able to actually see which one is maybe being driven harder than the rest, and why. So we start to ask questions. Verdigris is never going to hand you the answer. It’s part of a detective story, to some degree, where you got to go and take the clues that’s it gives you, and you have to go and find out what that is.”

In this case, the system quickly identified an industrial-sized air conditioner that was using too much power. They fixed it and saved a lot of wasted energy. In another case, O’Loughlin says Verdigris showed big spikes in energy use in the middle of the night. He figured out that security guards were flipping on all the lights.

“That’s 300-odd lights that needed to be switched on just to do a walk around,” says O’Loughlin. “Whereas with smart lighting controls, we can say, well actually we’re only going to bring them up 50 percent so they’re going to use half the energy. And we only need to bring on certain lights, only bring on 30 percent of them.”

Put another way: Lots of little changes add up to big savings. Quickly. With Verdigris installed, the factory was able to cut its monthly electricity bill by 20 percent, saving the company thousands of dollars.

Verdigris can also use artificial intelligence to automatically phase out inefficient appliances, dial them down when nobody is in the building, or even predict when one is about to go kaput.

The goal at Jabil’s Scottish factory: eventually cut energy use by 80 percent. Turning off the lights at night and putting in energy-efficient LED lightbulbs … that was easy. Getting the rest of the way there though, that’s going take a lot more effort and capital investment.

But O’Loughlin thinks they can get there. Consider the air conditioners, which he calls chillers.

“We have chillers, they spit out heat. How can we reclaim that, how can we use it so that we don’t then burn fossil fuel to heat the building?” asks O’Loughlin.

There are a growing number of companies like Verdigris offering products that monitor how buildings use energy. So, here’s a question: Why isn’t every hotel, factory and hotel using this technology?

“I think it’s organizational, psychological and political. It’s not economics and it’s not technology,” says John Sterman with MIT’s Sloan School of Management.

Sterman stresses that investing in energy-efficient buildings is the cheapest, fastest way to cut our energy use and greenhouse gas emissions. But many businesses don’t want to spend the money to fix what isn’t yet broken. Systems, like Verdigris, can identify problems like wasteful air conditioners, but then building owners have to pay big bucks for upgrades.

And when it comes to new technologies, using the cloud to monitor every electron spent, Sterman says, many hotel and hospital administrators ask this question: “Who else is doing this? And of course, at the beginning, not very many.

“So people are not willing to experiment, or, as they see it, take a lot of risk until they are sure there are lots of other folks who have done it. And that creates a barrier, a tipping point you have to get over,” says Sterman.

Hopping back to Silicon Valley, I asked Mark Chung: Let’s say I own a 20,000 square-foot factory, convince me to pay you a monthly fee to monitor my energy use.

“20,000-square-foot factory, OK, I’m just doing a back of the envelope calculation,” says Chung. “It’s probably going to be roughly a few hundred bucks a month, but you’ll probably save easily ten times that.”

Let’s repeat that — spend a few hundred bucks a month to save a few thousand. For a hospital, those savings could translate into hundreds of thousands of dollars annually. For a company like Jabil, with more than 100 factories worldwide, savings could be in the tens of millions.

Now translate that across the globe into energy savings.

“Buildings consume about 2/3 of the world’s electricity and half of that is wasted. And that is probably about 15 to 20 percent of greenhouse carbon emissions today,” says Chung.

Good for businesses, good for the planet.

Verdigris is still a new enterprise, approaching its first 100 corporate clients. Chung says when the business really takes off, he wants to give away his technology to homeowners for free: “That’s the plan, we want to get it out everywhere, and we want to go all over the world.”

Chung has huge goals. But he’s modest about what he’s trying to accomplish. He’s says he’s just an engineer using his skills to help solve a problem.

And one footnote: If you’re curious about that name, Verdigris, it’s the bluish-green patina that forms on copper that’s left outside. Think: old French buildings.

“We thought it was a beautiful color,” says Chung. “But actually, copper is the elemental infrastructure of every single building in the world, what all of our electricity runs on. And what we have as a company mission is this desire to expose that to the world and make it green."