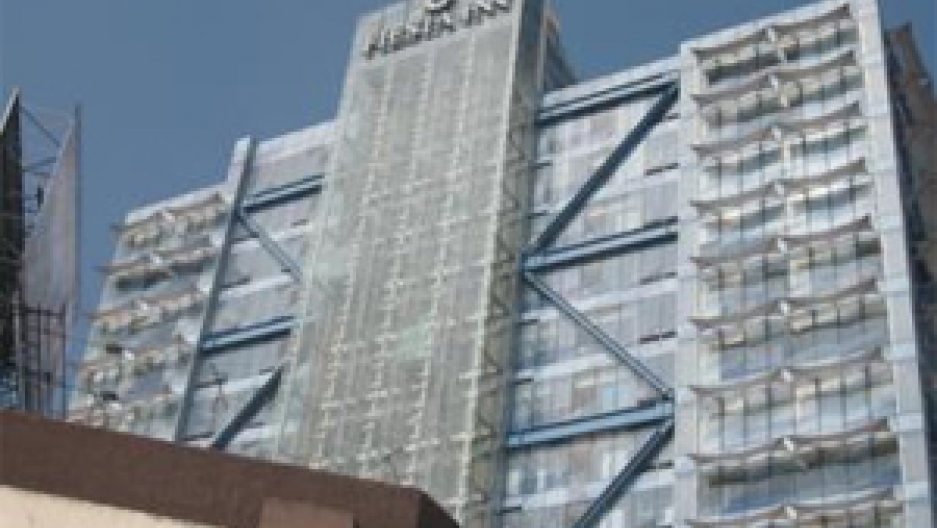 Jason Margolis from PRI's "The World" has the story.

Many of us spend eight or nine hours a day sitting in an office. To stay comfortable, and productive, we rely on air conditioning and heat, lights and computers. All of this sucks up a lot of energy. But a lot of this electricity just isn’t necessary. Take a city like Toronto...

Margolis: That’s architect Dermot Sweeny. I met him a on a recent freezing day amid Toronto’s downtown skyscrapers. Sweeny says most buildings in North American cities were designed for a different era.

Sweeny: “We’ve doubled and tripled the number of people in a building. So we’re producing more heat with our bodies…"

Margolis: Sweeny takes me inside the guts of a new 30-story office tower.

Margolis: To compensate, Sweeny says, older buildings blast in cool air, year round. But Sweeny says it doesn’t have to be like this. In this new building he’s turning architectural design upside down, literally.

Margolis: Sweeny has taken the wiring and ventilation that’s normally above our heads and moved it beneath our feet. He’s given every person individual control of the temperature in their work space.
He points to small, circular ventilation ducts spaced every few feet along the ground.

Sweeny: “That’s an air diffuser getting air out of the floor. And that’s adjustable.
Margolis: “So someone would have their desk...”
Sweeny: “So someone working here can lean down and open or close the air, control their own temperature and flow.”

Margolis: This has two benefits. First, office workers can adjust the temperature just the way they like it. Gone are the days of sitting right beneath an air vent, bundled up in a sweater, during summertime. Second, it saves lots of energy. You don’t need to cool an entire building, just the areas where people are too warm.

With this change, and other innovations, Sweeny says his buildings can use 35 to 50 percent less energy than a typical Toronto office building. And Sweeny is happy to share his ideas with colleagues…. Which is why he’s joined the Architecture 2030 challenge. It was started by New Mexico architect Edward Mazria.

Mazria: “The more brainpower we can bring to it the better, and so the more people we have working on it, the better.”

Margolis: Mazria is building on more than four decades in the business to get architects to share resources and commit to building smarter. He says new buildings can already cut energy use by 60 %. His goal is buildings that use no fossil fuels at all by 2030. He’s says that’s not implausible, if architects combine new technologies with old-fashioned ideas.

Mazria: “What materials you would use both inside and outside the building. Where you would locate the openings for windows, whether you would shade the openings or even shade the entire building in the summertime. It’s only with the advent of inexpensive fossil fuels that we’ve gotten away from those kinds of design principles. So in essence we’re going back in time.”

Margolis: So far, architects from 39 nations have signed on with Mazria’s Architecture 2030 challenge… They all share information. But what works in cold Canada, isn’t always what an architect in a place like Mexico would do.

Margolis: Insurgentes Avenue in Mexico City is said to be the longest avenue in the world: 29 miles. The buildings are an unimaginative mix of concrete and brick boxes, in various states of disrepair. Every so often though, a few buildings curve and swoop. They’re completely covered in glass. The glass allows Mexico’s ample sunshine to heat and light the building. The buildings also have open interiors with gaps in the ceiling. This allows hot air to funnel up and out of the buildings, like a chimney.

Margolis: These structures were designed by architect José Picciotto, one of two Mexican architects who signed onto the 2030 Challenge. Picciotto took me on a driving tour of some his work. All of his buildings have a similar look, but one size does not fit all. He points to a hotel he designed.

Margolis: The front of this building faces straight at the noonday sun. So, he’s covered the windows with small blue polka dots. The dots help block out some of the Mexican summer heat, while still allowing in plenty of light. Horizontal shades also extend several feet off the windows to provide additional cooling. This isn’t high tech stuff. But Picciotto says his buildings use up to two thirds less energy than comparable buildings in Mexico City. Still, it’s been hard to sell his ideas. He tells me about a conversation he had with a another local resident, when Picciotto mentioned he was an architect.

Picciotto: “And he told me, have you seen that building in the corner of blah, blah, blah, the blue one with those things? Don’t you think it’s horrendous? He didn’t know it was mine.”

Margolis: In Toronto, architect Dermot Sweeny has had similar difficulties.

Sweeny: “I approached a lot of developers, and they were quite honest, and they said, well nobody is doing this. Why would I do this?”

Margolis: The answer, Sweeny says, is that architecture has to change if we’re to have any chance of stopping global climate change. But the economics to build green don’t always work. Tenants benefit from lower energy costs. But developers have to pay for the capital improvements up front, and don’t necessarily recoup the long-term savings. That’s why Edward Mazria, the founder of Architecture 2030, says architects can’t solve the green building problem alone. He says it’s critical that governments play a role to make energy efficient buildings the rule, and not just an aspiration.