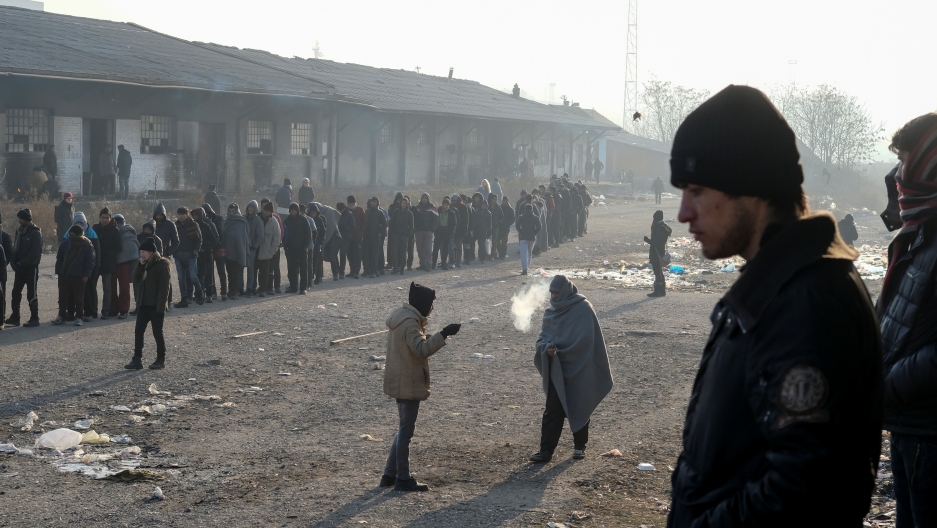 They cough, suffer from frostbite and are infested with body lice: hundreds of young migrants remain in appalling conditions in derelict Belgrade warehouses in the middle of Serbia's freezing winter.

Since Europe shut down its borders in March last year, thousands have found themselves stuck in limbo in the Balkan country — and its authorities are under pressure to do something about it.

But despite the young men sheltering near the snowy railway tracks in the heart of the capital, "we do not think a 'new Calais' can be born near the station in Belgrade," said Ivan Miskovic, from Serbia's Commissariat for Refugees.

"We would not allow anything like that," he said, referring to the notorious refugee camp outside the northern French port city of Calais. Dubbed the "Jungle," it was dismantled last October.

This week, for the first time, aid group Doctors Without Borders (MSF) erected five tents in an area by the station, near the warehouses which have no running water or electricity.

The goal is to protect the most vulnerable, especially children, said Stephane Moissang, head of MSF in Serbia.

They include 8-year-old Afghan Aziz Rahman, waiting with his 17-year-old uncle for his father, who is serving 10 days in detention for illegally crossing the border.

MSF's initiative "does not help us to convince these people to join [official] reception centres," said Miskovic.

By opening new centres for migrants, "the Serbian government has shown that it takes into account the urgency of winter," says Moissaing, but that "is not enough to absorb everyone."

Most of the 7,300 migrants currently estimated to be in Serbia by the UN refugee agency (UNHCR) are sleeping in one of 17 official centres.

But there are always more than 1,000 outside — most in Belgrade, mostly male and young, often minors.

Temperatures can drop below minus 10  degrees Celsius (14 degrees Fahrenheit) at night.

Cases of frostbite "can only increase in the coming days as most of the refugees have really poor clothing and shelter," said Momcilo Djurdjevic of MSF.

He lists the other health problems his team has dealt with since temperatures plummeted: body lice, respiratory infections, scabies.

In the largest warehouse, thick with smoke from the fires lit to keep warm, the sound of deep coughs can be heard from migrants huddled under grey blankets.

Some concede that they refused to move to an official camp for fear of being deported, moved away from EU borders and cut off from the people-smugglers who lurk around the station.

They also worry about restrictions in the centers, like the one in Presevo in southern Serbia, where freedom of movement is limited.

But many have given in — and when Serbian authorities opened up a new camp this week in an old barracks about 20 miles (30 kilometres) from Belgrade, its 225 beds were immediately occupied, half of them by minors.

In the largest of the warehouses, faces are reddened by the cold and eyelids are swollen, making the youngsters look much older than their years.

The outside walls bear political slogans such as "One World, One Struggle!" — most likely written by activists. Others bear the mark of exhausted travellers: "We need shoes" reads one, while another calls for doctors.

Liaqat Khan, a 17-year-old from Bajaur in the northwestern tribal areas of Pakistan, said he had tried and failed to get access to an official center.

He said he tried 20 times to cross the borders into the EU but claims to have been brutally returned to Serbia by Croatian and Hungarian police, who took his phone and money.

Human Rights Watch on Friday slammed reports of police violence against migrants, particularly in Croatia, saying the "shocking and abusive treatment of asylum seekers at its border is unworthy of an EU state".

Unable to find official shelter, Khan returned to the unsafe warehouse in Belgrade.

"All the people have chest problems," he said, as others kept warm by the fires fuelled by bits of railway sleepers, emitting toxic fumes into the makeshift dormitory.