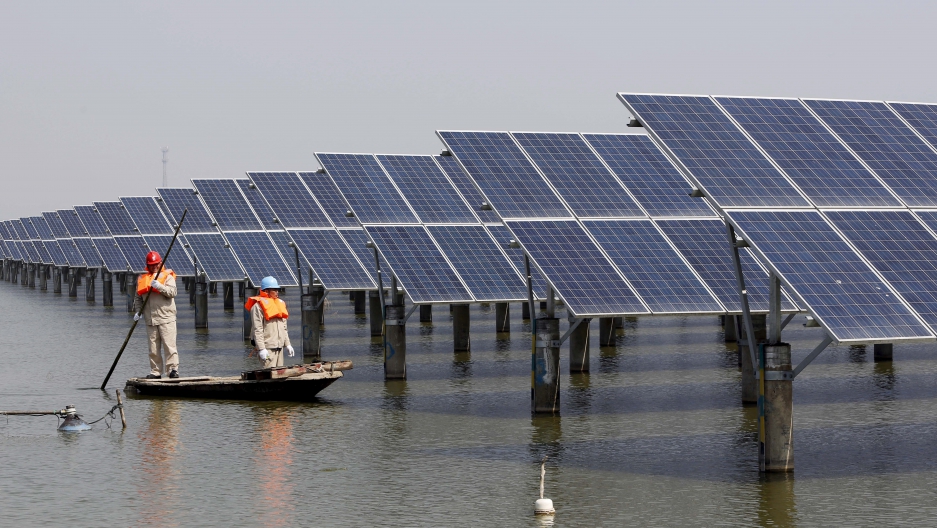 China says it will invest another $361 dollars in renewable energy over the next four years and create 13 million new jobs in the sector, building on already massive investments over the past decade. The country already has the largest capacity of solar power, including this array of photovoltaic panels in Jiangsu Province.

In Donald Trump's vision of America, some parts of the country's future look a lot like its past. Exhibit A: his promise to revive the flagging coal industry.

Meanwhile the world's other economic giant, China, which now uses more coal than any other country on Earth, is moving sharply in the opposite direction. China recently announced another huge new investment in renewable energy — $360 billion by 2020, which the Chinese government says will also create 13 million new jobs.

So which is the better bet on where the jobs and the energy of the future will come from? We put the question to Mary Kay Magistad, The World's longtime China correspondent and now the host of its podcast "Whose Century Is It?"

“If you look at what people are saying across the energy industry, the future is in renewables, and natural gas and so forth,” Magistad says. “The cost of renewables has come down so far so fast that in some places it's actually competitive with coal, and even beats coal. And the cost will probably continue to drop.”

Magistad says some of that cost reduction has actually come as a result of subsidies the Chinese government has been giving its solar companies to help figure out how to produce solar cells more cheaply.

So the big new push announced this month is hardly a brand new effort.

There’s “been a push to increase renewable energy in China, I would say for the past decade,” Magistad says. And it’s brought big results.

“In the first half of [2016], the solar industry increased production by 300 percent. It was actually more than all countries in the world except for the US, Germany and Japan. Ever. Solar and wind are increasing much faster in China in terms of capacity compared to coal use, and in fact by some estimates coal use in China peaked a couple of years ago and is starting to go down.”

As an exclamation point on that trend, China also announced this week that it has canceled 104 planned new coal-fired power plants.

And the trend is playing out more broadly. Coal use is in sharp decline in the US, mostly due not to government regulations but the glut in cheap natural gas from hydraulic fracturing, or fracking. And while coal use is still rising globally, the US Energy Information Agency says the industrial-age fuel is now the world’s slowest-growing energy source.

So with much of the world rethinking its commitment to coal, and China, the world’s biggest country and its second-largest economy, going ever bigger into renewables, is coal even a good bet for Trump and the US when it comes to putting people back to work?

“In the United States there aren’t even a million jobs in renewable energy” right now, Magistad says. “In China there about double that number already, and the Chinese government is saying it thinks it can get 13 million jobs in this sector by 2020.

“You could say, ‘Oh but the Chinese population is much bigger, China's energy needs are much greater.’ But generally, the United States could be assuming a leadership position in this industry and exporting” to fill the booming global demand.

Instead, Magistad says, China is using green energy, and Trump’s rhetoric extolling the virtues of fossil fuels and dismissing the reality and risks climate change, as another stepping stone in its push for global leadership.

“If I were [Chinese President] Xi Jinping, I would look at Donald Trump up to this point as the gift that keeps on giving. ... Xi Jinping has taken a lot of flack for trying to strong-arm China's way into being a predominant player in the region, [but] over the last few weeks he's been able to come off looking very statesman-like — in terms of free trade, when he was at Davos, [and] in terms of climate change and protecting the global environment. ... Who could've seen that coming a decade ago?”