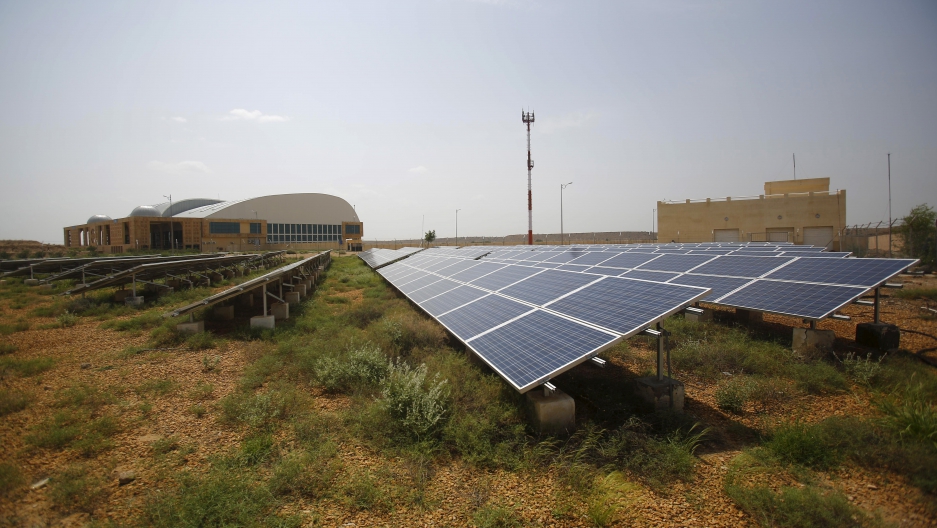 Solar panels are seen inside the premises of the Jaisalmer Airport in desert state of Rajasthan, India.

Following Donald Trump’s election to the White House, world leaders rushed to rally around the Paris climate change agreement, indicating they would stick to their pledges to cut carbon even if the US withdrew from the international framework.

China quickly began to position itself as the new world leader in global climate policy.

The European Union also voiced its commitment to the hard-fought agreement.

Absent from the public chorus of support was India, a silence that worried experts.

“India came to the Paris process later, their commitment seems to be weaker ... so I wouldn’t be at all surprised if India, looking at the United States, itself also backed off,” says David Victor, a professor at the University of California, San Diego, who has been watching international climate negotiations for decades.

India is the world’s fourth-largest greenhouse gas emitter and is rapidly developing: The government of Prime Minister Narendra Modi has pursued a massive effort to bring reliable electricity to the roughly 300 million Indians who don’t have it, and a growing middle class will boost energy demand even further in upcoming decades.

Right now, India is pursuing a “more of everything” energy policy, building small-scale solar installations in rural villages but also looking to increase the amount of power derived from coal, which currently provides about half of the country’s electricity.

Whether India leans more toward renewables or coal will have a huge impact on the country’s emissions, which in turn will contribute to global warming and sea-level rise.

Most watchers are optimistic that India will meet its current commitments under the Paris agreement: to increase the share of non-fossil-fuel energy sources to 40 percent by 2030.

“If you read India’s commitment document, it says it is doing things in its own interest and in the interest of its people,” says Lydia Powell, an energy analyst at New Delhi-based think tank Observer Research Foundation. “I have a feeling that it will not substantially change its position because most of the commitments are things that would probably happen anyway.”

Last month, the Indian energy ministry projected the country will actually exceed its Paris commitment by meeting nearly 60 percent of its citizens’ energy needs with non-fossil-fuel sources by 2027. And it indicated the possibility that no new coal-fired power stations would be needed to meet energy needs until at least that year.

But that’s just the beginning.

“None of the major emerging economies have made pledges that are much beyond, or at all beyond, what they were going to do anyway,” Victor says.

The initial pledges made under the Paris agreement, if they are all met, would allow for more than 5 degrees Fahrenheit of global warming. The international community has agreed that it needs to keep warming “well below” 3.5 degrees to prevent the worst effects of climate change.

“What matters in the Paris process is [that countries] make an initial pledge and then they do more and ratchet it down over time,” Victor says. “My concern is not that the current pledges are weak, it’s that if you don’t have countries like India seriously engaged, the process of deepening in confidence-building can’t really proceed as is required.”

And if the United States, the largest historical emitter of greenhouse gases, isn’t making similar investments, Victor argues it’s unlikely that policymakers in developing countries like India will feel pressured to spend the money to keep up.

Ajay Mathur, a key climate negotiator for India and the delegation’s spokesman at the 2015 Paris summit, says the US could definitely stall the ratcheting up of ambition under the agreement.

“With the US leaving the climate change negotiations or being lukewarm to them, the urgency to agree on how we would step up our commitments would be lost,” Mathur says.

If new commitments get kicked too far into the next decade, “then I think we are playing with fire.”

One of the most sensitive aspects of the international climate change negotiations has been money.

The US pledged $3 billion to something called the Green Climate Fund, and in one of his last acts in office, President Barack Obama this week paid the second instalment of $500 million.

But the US still owes $2 billion, and with Trump pledging to “stop all payments of US tax dollars to UN global warming programs,” it is unclear if those funds will ever flow to UN coffers.