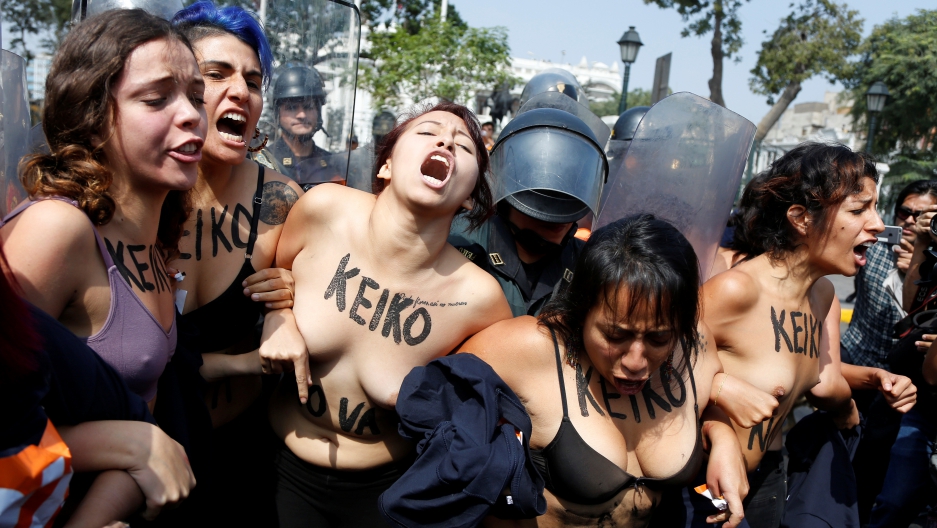 Activists seeking to legalize abortion protest against Peruvian presidential candidate Keiko Fujimori in front of the Congress in Lima, Peru, on May 19, 2016. The text on the activists reads, "No Keiko."

Seeing a rise in the visibility of LGBT and women's rights movements in their country, Peruvian conservatives responded with a "March for Heterosexual Pride."

To counter a ministry of education curriculum promoting sex education and gender equality, some people launched a NIMBY-ish movement, Con Mis Hijos No Te Metas ("Don't Mess With My Children"), to fight against "gender ideology" and teachings that they think promotes homosexuality.

This staunchly conservative, Catholic nation is in the middle of a fight about its moral core.

For the decade and change I lived in Peru — from my birth through primary school — homosexuality was presented to me as a sin. A shameful, mockable perversion I should hope to never catch.

And being female? That came with a full package of body shaming and wolf whistles, the wandering hands of old men a constant danger, young as I was.

Still, I was lucky. I'm fairly straight, and the worst harassment I ever endured was a Peeping Tom. Besides, I left. And that might be why I'm surprised by the progressive gender initiatives underway.

When the March for Heterosexual Pride event appeared on Facebook — the original has been deleted due to all the trolling, leaving only this smaller event made for people to leave more "trolly" remarks — Congressman Alberto de Belaunde commented: "Hello. I'm confused by the event date. I thought every day was heterosexual pride day."

De Belaunde is a proponent of civil unions for same-sex couples in Peru. This late 2016 proposal would grant same-sex couples "rights and responsibilities within the code of law," but not allow for marriage nor adoption.

Recently, a court ruled to recognize the marriage of activist Oscar Ugarteche, who married his partner in Mexico and sued for it to be considered valid in his native Peru. Religious and conservative leaders were shaken by the ruling, but the court's reasoning was based in civil law. The court also cited social changes throughout the world expanding access to same-sex unions.

But same-sex marriage is still not legal in Peru. So far, only Ugarteche's marriage will be recognized.

That ruling, along with abortion-rights protests and the ministry of education's new curriculum — which the government says advances gender equality, teaching children about reproductive rights and sexual identity — would have been unthinkable when I was growing up in Peru.

The opposition to these things — that seems like a more familiar Peru to me.

But as fellow ex-pat Gabriela Wiener wrote in The New York Times last year, something has changed. Wiener wrote specifically about women, who last year gathered by the thousands in Lima and other major cities to denounce their domestic abusers, their rapists.

"It is historic, it is painful," she wrote, "but it also fills you with hope to see how thousands of Peruvian women lost their fear and decided to unite."

That loss of fear may not be the same force driving efforts toward civil unions or gender equality in classrooms. But that all this has happened in the last year signals a shift in the political and social climate of the country.

The machismo that drives so much of our social norms is meeting its match.