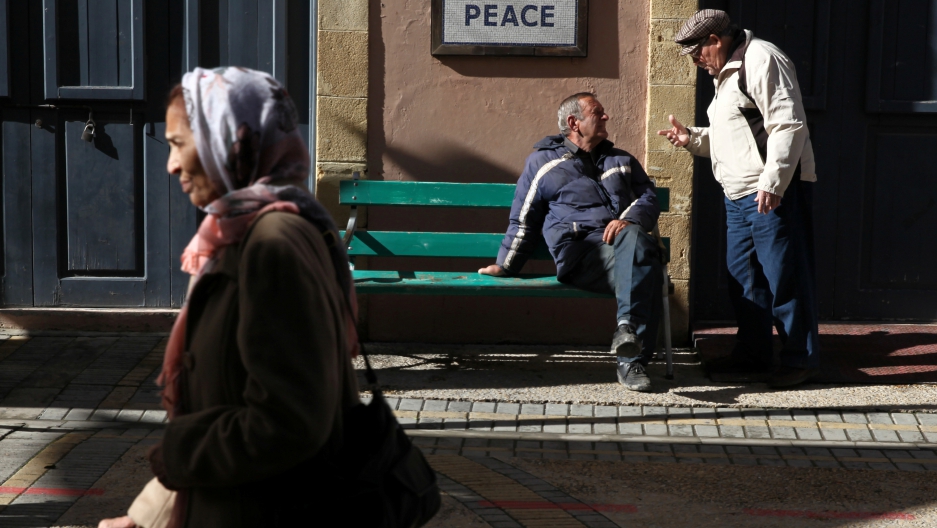 People are seen on Ledra Street next to a peace sign near the UN-controlled buffer zone in Nicosia, Cyprus, on Jan. 11, 2017.

Donald Trump this, Rex Tillerson that. Russia, Russia, Russia. It's been a week of heavy news about US politics and America's relationship with the world.

Let's catch up now on some news that's been bumped off the front page by all that's going on in Washington.

Quietly, a court in Peru has recognized a same-sex marriage.

This is a huge deal in the strict, conservative Catholic country, which "lags behind many of its Latin American neighbors" on this issue.

On Monday, the court ruled for the national civil registry agency to recognize Ugarteche and his husband's union on their IDs.

The agency is preparing to appeal the decision.

Thousands of Mexicans marched in Mexico City this week to protest the 20 percent hike in gasoline prices that took effect on New Year's Day. The protests have caused looting and casualties.

Some protesters have also tried to disrupt border rail crossings. The government said protesters had delayed 11 trainloads with about 1,000 cars of merchandise headed for the US.

Now, some news about medical tech

Researchers at Stanford University have come up with a cheap innovation that could help spot diseases.

The device is like a disk with two strings passing through it. And the twisting motion makes the disk rotate fast.

Manu Prakash is one of the researchers who came up with the idea. He says, to his knowledge, “it’s the fastest spinning object driven by human power."

The researchers hope the innovation will benefit patients in parts of the world with no hospitals and no electricity.

And now, let's go to Cyprus

The island in the Mediterranean has been divided for more than 40 years: People loyal to Turkey live in the north, and the larger Greek population lives in the south.

But today, there's talk of reunification.

Key players are meeting at a UN conference in Switzerland to try to hammer out a deal.

The talks are geared toward outlining a "bizonal state with some form of central administration," Reuters reports.

This could be a big deal for Turkey, a country that's wanted to become a part of the European Union for decades, but has been in part hindered by the conflict in Cyprus.

Ethiopia's shiny new electric railway was switched on this week.

The nearly 500-mile-long railway connects the Ethiopian capital Addis Ababa to Djibouti on the Red Sea.

East African officials were on hand for the inaugural cross-border train ride, as were Chinese officials. China paid for the $4 billion railway that will cut travel time from three days by car to 12 hours by train.

One official said the Ethiopia to Djibouti railway will eventually link up with neighboring Sudan and Kenya.

The BBC says the track for this new rail runs next to one with the same route, built more than a century ago.