A relative of a prisoner sat outside Anisio Jobim prison in Manaus, Brazil, on Jan. 3, after a large riot ended with dozens killed and escaped.

2017 is off to a bloody start in Brazil’s prisons.

At least 56 people were killed during a prison riot over the weekend in the northern city of Manaus. A total of 184 prisoners escaped from that and nearby prisons.

Sérgio Fontes, security secretary for Amazonas state, home to the prison, cited an ongoing war between rival drug gangs as the cause of the violence. The riots finally ended Monday. As of Tuesday, officials had recaptured about 50 of the escaped inmates and a manhunt was underway for the rest.

The victims — many of them beheaded and thrown over the prison walls — mainly included members of Brazil’s feared First Command gang, known by its Portuguese initials PCC, according to local and international media reports.

The clash between the First Command and the Northern Family and its allies could spell more trouble to come.

“It is the death blow to a decade-long truce between the country’s major factions, especially the PCC and the Red Command, who are aligned with the Northern Family,” Robert Muggah, research director of Rio-based security think tank Igarapé Institute, wrote in an email. “It appears to be as much about control over national prisons as the country’s drug trade.” 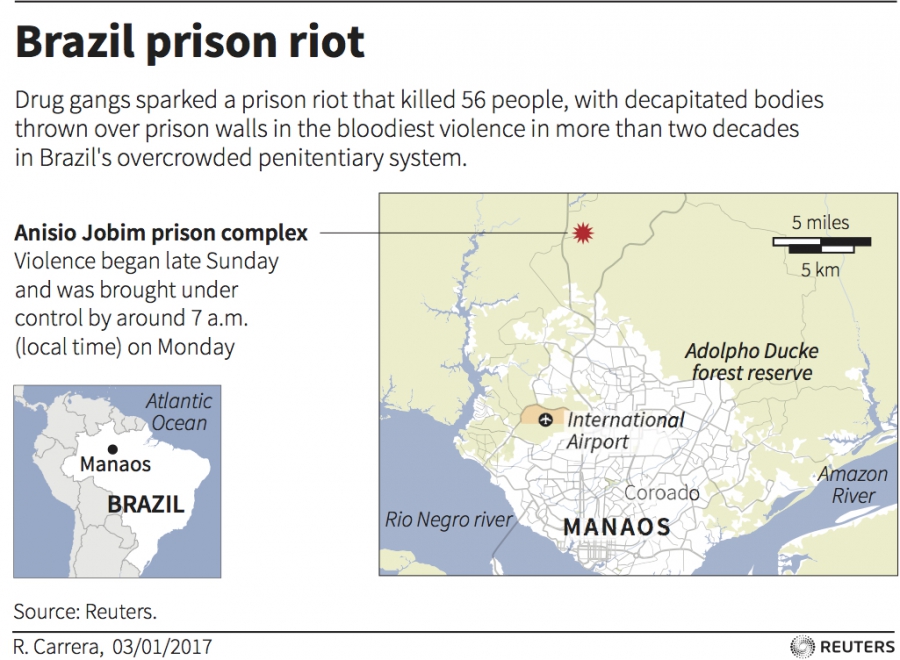 Both the PCC and the Red Command, the country’s No. 1 and 2 criminal organizations, were born inside the chaotic prison system in the early 1990s. The gangs control much of the drug trade in the largest cities. Favelas, or marginalized neighborhoods, are typically demarcated by which gang is in charge.

Historically, the São Paulo-based PCC has largely left Rio de Janeiro’s lucrative drug trade in the hands of the Red Command, Muggah explained. But the killings in Manaus are more evidence that the São Paulo gang is looking for more territory in Rio and elsewhere and that the Red Command and its allies are fighting back.

Last month, media outlet O Globo reported that the PCC had taken root in Rio’s massive Rocinha favela. The move is a gutsy incursion into Rio de Janeiro by the criminal organization, and experts like Muggah worry that it will lead to increased intergang violence in the months to come.

Exacerbating the situation, Rio state is in a dire financial crisis.

For months, the state hasn’t been able to pay public employees, including police officers, on time.

A “pacifying” program that deployed military police into Rio’s favelas is now considered largely a failure, as drug gangs have retaken control of many of the city’s most troubled neighborhoods.

For favela residents, internecine wars between different drug dealer factions are just one of the many threats the population has to endure, said Sergio Leal, a resident of the Cidade de Deus favela in Rio.

“Look, we live in fear of a lot of things. Fear of drug violence, fear of violence from the police, fear of drug dealers fighting between themselves or one faction taking over from the other. That’s just the fear we live under,” Leal said.