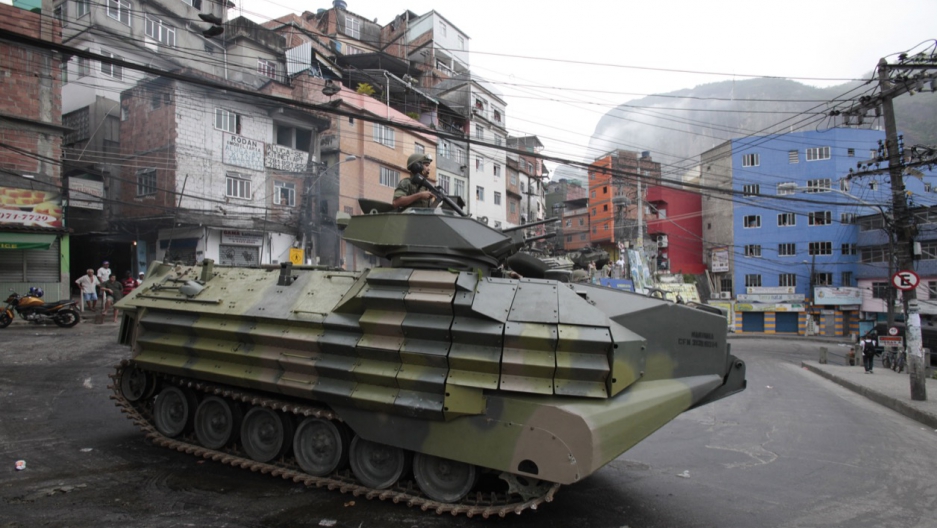 Gray-uniformed soldiers traverse the steep streets in clutches, their rifles held at the ready, their eyes scanning for trouble through dark sunglasses. They are the Pacifying Police Unit, the UPP, a special faction of Brazil’s military police that occupy dozens of this city’s favelas.

Launched in 2008, Rio de Janeiro’s “pacification” is an ambitious plan to wrest control of the city’s most troubled favelas away from drug gangs, while also providing social programs to promote community organization and governance. The ultimate goal: bring peace and prosperity to the favelas and thus the broader city.

But today, three years after the military police first invaded it, Rocinha feels far from pacified. Rather than make it feel safer, the official occupying force has removed the higher echelons of the drug gang that operates there, residents said, leaving behind younger criminals who fear nobody and respect nothing.

More from GlobalPost: Rio’s approach to invading and policing favelas holds some lessons for the world

Residents still describe hearing gunshots several times a month. They told GlobalPost they don’t trust the police any more than they do the drug dealers. That sentiment has worsened with high-profile corruption cases involving Rocinha’s UPP commanders. And most Rocinha residents wouldn’t think of reporting crimes to the police, for fear of gang reprisals and a feeling that nothing would be done by the cops anyway, several interviewees said. While it would be unfair to draw conclusions about Rio’s pacification program from one neighborhood, Rocinha’s experience is emblematic of the scale of the security challenge the state government here is facing.

Pacification did have some early success at violently ousting neighborhood drug lords, and the world began to take note. Robert Muggah, a security expert and research director of the Igarape Institute in Rio, calls it “One of the most fascinating policing experiments underway in the world right now.”

But Brazil’s largest favela stews with resentment, anger and violence, and many residents see precious little to feel hopeful about.

“What is fear? Maybe for me, and for many people who were born here, fear is just something we don’t feel any more,” said one 30-year-old Rocinha resident, who gave his name only as Marcos for fear of reprisals from the police or drug gangs. “I was born into fear, I’ve lived my whole life in fear. You might as well ask a fish if he’s scared of the ocean.”

A sprawling complex of brightly colored structures and crowded, narrow streets, Rocinha straddles and rises up a steep granite mountain that divides two of Brazil’s most exclusive neighborhoods: Gavea and Sao Conrado. Muggah said the neighborhood has traditionally been a flashpoint for Rio and Brazil, given its sheer size — a little over 60,000 residents, says the 2010 census — and its prominent location in this city’s swanky South Zone.

Like many of this city’s favelas, much of Rocinha is still waiting for basic services like working sewers, running water and stable electricity. The community’s promised transformation still seems a long way away. Rocinha was a hotbed of democratic activism at the fall of the dictatorship in the 1980s, and the neighborhood has been a highly visible focus of the pacification program, Muggah said.

Several residents told GlobalPost that the community had more of a sense of order and peace before the UPP moved in. Drug gangs imposed their own form of law and order. Crime against residents, they said, was met with severe reprisals and was therefore rare.

Now, longtime drug gang leaders have either been arrested or have set up camp elsewhere, leaving lower-level “bandidos” to fight for control of the lucrative trade in marijuana and cocaine to wealthy nearby residents. Those gangsters fight both among themselves and with the police, said 52-year-old Jilberto Santana, a lifelong Rocinha resident.

More from GlobalPost: Brazil: 'Get your coke and weed here!'

“The older bad guys, they at least had some respect. These young thugs don’t respect anything,” Santana said. “Before, when the police came in, the dealers would run. Now they don’t care, they shoot at the cops, the cops shoot back, and who gets killed? The innocent people in the middle.”

Santana and several others interviewed for this story said nobody born and raised in Rocinha would go to the police for help if they were the victims of a crime. Just like any poor neighborhood around the world, there’s an informal way of doing things in Rocinha, he said.

Residents described that informal process: If their home was broken into, or they were robbed, they would approach a known lower-level drug dealer or gang member in the neighborhood, who would then raise the issue with his bosses. The victim of the crime would await action from the dealers, which would often come swiftly and brutally.

Equally swift and brutal is the punishment of police informants, known colloquially here as “X9s,” Muggah said. Traditionally, those known, or even suspected, of talking to the cops were propped up inside a column of tires atop Rocinha, doused with kerosene, and set on fire by the gangs as a message to the favela, he said.

Most of the people interviewed by GlobalPost for this story were initially fearful of even talking about the UPP, and only agreed to interviews once assured either of anonymity or that they were not being filmed.

And almost every person we spoke to said they wouldn’t bother reporting a crime to the police. In addition to fear of being labeled an X9, most said, they lacked faith that the police would act to help them.

“They don’t do anything!” said a 46-year-old street trader who gave her name only as Roseanne. “It’s really dangerous for us. Also, they aren’t 100 percent friendly, they’re not our friends.”

Col. Robson Rodrigues, a former senior military police official in Rio who retired this month, acknowledged that the UPP rollout hasn’t gone perfectly in Rocinha. But he also lamented that residents blame the military police for the failure and delays of social programs that were supposed to be implemented after the police moved in.

“A lot of these communities don’t have any representation from the city at all,” he told GlobalPost. “They’ve been promised these marvelous programs that haven’t appeared and they blame the UPP. But we’re not responsible for that! We’re a security organization, we’re responsible for security.”

And Rodrigues said the statistics show that pacified neighborhoods like Rocinha have seen significant drops in crime, proof that the program is working to some extent.

Muggah agreed, citing Rio’s dropping homicide rate since 2008 when the UPP program began as evidence that violent crime, at least, has been largely driven out of many favelas. He said even the areas around pacified favelas have witnessed drops in violent crime.

He said it’s too early to conclude that the state has failed communities like Rocinha. The plan was always to provide security first and then to gradually roll out social programs like new libraries and sports and community centers, Muggah said. Rocinha has received some of these, but it will take several more years of state investment and, most of all, commitment, to the social side of the UPP project for residents to truly see results, Muggah said.

Those we interviewed, especially younger residents, will need some serious convincing.

Asked if he could point out one benefit of the UPP program in his neighborhood, 22-year-old Daniel Santana paused for a moment, thinking.

“Safety for the motorcycles,” he said. “A long time ago, they did not use helmets. Right now, because of the police, they use helmets.”