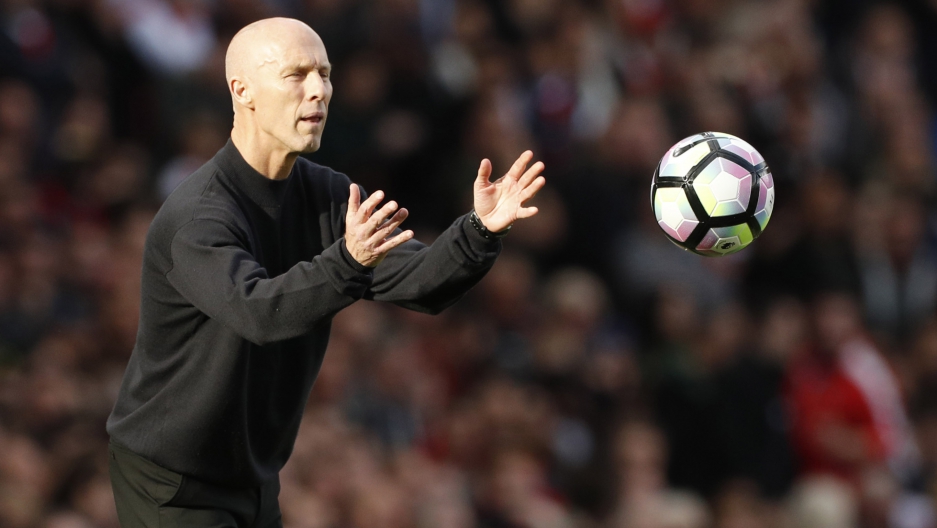 Bob Bradley is shown here during his first game as a Premier League manager in a game of Arsenal v Swansea City at Emirates Stadium in London on Oct. 15, 2016.

On Oct. 3, Bob Bradley made history by becoming the first American to be hired to coach a team competing in the English Premier League, widely considered the best football league in the world.

This Tuesday, Bradley was fired by his club, Swansea City AFC. He’d been in charge for exactly 11 games. His team won only two of those matches, tied two and lost seven. That’s a pretty dismal record in any league.

That dismal record was the reason Bradley was fired. It had nothing to do with his nationality. After all, Swansea’s owners are also Americans.

No, this outcome has more to do with a team that was already in trouble before Bradley arrived, with a weaker roster than in previous seasons. Bradley himself was hired in midseason because things were already looking bad under his predecessor.

But that’s not the whole story. From the moment Swansea hired him, Bradley faced the daunting task of convincing British football fans (aka "soccer fans," on this side of the pond) that an American deserved the honor of coaching in the Premier League. As one commentator put it, it was a stigma he could not escape.

Don’t forget, England is the place where modern football was invented and all that. And as many Brits will tell you, those Yanks don’t even call the game by the right name! (Editor’s note: the word soccer originated in England, so there’s that.)

Still, in his first press conference as Swansea coach, Bradley was asked what it felt like becoming the first American to manage a team in the Premier League. He said Americans “have always understood we have to earn respect” in football.

That respect was harder to earn than Bradley realized. One moment during his tenure at Swansea showed that clearly. It came after a 3-0 defeat against Middlesbrough. Bradley was asked by a BBC reporter to explain what happened. Here’s part of his answer:

In those 33 seconds, Bradley committed three linguistic sins as far as British football fans are concerned. He called a penalty kick a "PK." He mispronounced the name of the league (it’s PREM-yair not pre-MEER). And he spoke about "road matches," as opposed to the British "away matches."

In other words, the American coach spoke like an American. It’s not like he did that all the time, either (see the handy chart in this article by the Wall Street Journal). But that was enough to generate a wave of criticism from fans. Here’s just a small sample:

@RobHarris @BBCMOTD His use of PremIERE league bothers me most

In the end, though, the rules of the game are the same wherever you go. And whether you call it football or soccer, it’s a game about results. And in the case of the Premier League, big money.

That’s where the pressure to fire Bradley really came from. A few more months of bad results and Swansea City AFC could lose its Premier League status. Time is short, Bradley could not deliver under enormous pressure, and Swansea’s owners felt compelled to make a change.

Bob Bradley’s firing by Swansea was the end of an era that lasted less than three months. For 85 glorious days, an American coached an English Premier League football team. I think it will be quite a while before another Yank gets the chance.