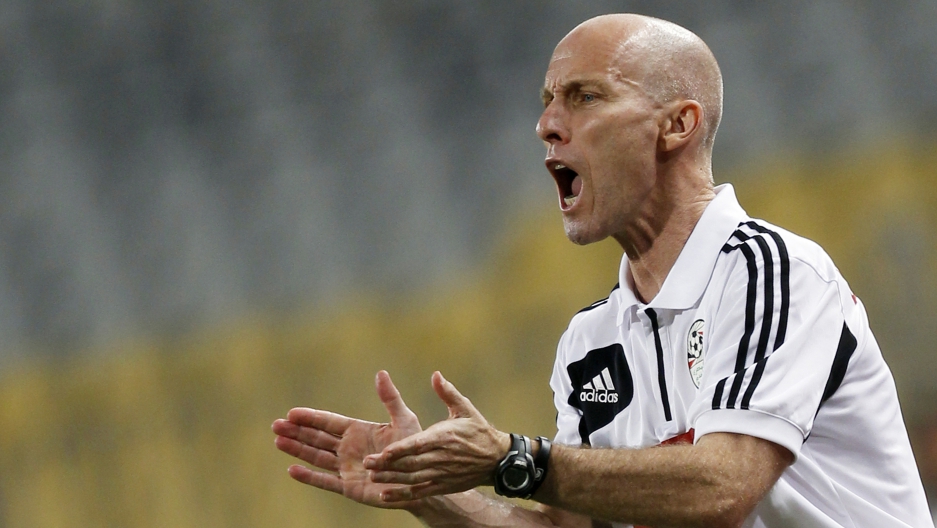 American soccer coach Bob Bradley in 2012, during a World Cup qualifying match between Egypt and Mozambique. Bradley was head coach of Egypt's national team at the time.

England’s Premier League is widely considered the best soccer league in the world. It attracts top talent from all over the planet. But never had an American coach been given the responsibility to manage one of the league’s teams. Until now.

That's the barrier that Bob Bradley is crashing through. The former US Men’s National Team coach is starting a new job as manager of English Premier League team Swansea City. And it won’t be easy. Bradley is joining Swansea with the season already in progress. His predecessor got fired because of poor results. Swansea is currently in 17th place, out of 20 teams in the league.

At the end of the season, the bottom three teams lose their Premier League status and are relegated to a lower division. Bradley’s job is to avoid that. And that’s not simple in the toughest soccer league in the world.

But the significance of Bradley’s appointment goes beyond Swansea’s fate and the coach’s own career. This is a huge deal for all of US soccer. Here is a chance for an American to prove that US soccer is all grown up now; that Americans can play and compete at the highest levels of the world’s favorite sport.

Bradley himself thinks he’s up to the task. Earlier this year he told Sirius XM that he was on the same level as some of the top managers in the English Premier League. “Maybe I’m stupid,” Bradley said. “But I think that I am a manager in and around that level.”

“I’m not saying I’m better than these guys,” Bradley added, referring to the likes of Pep Guardiola of Manchester City and Jurgen Klopp of Liverpool FC. Those are two of the most highly rated soccer coaches in the world, by the way.

“I haven’t had those types of opportunities, but I think people that have played for me have always felt that the experience in the team was different, that training was challenging, that there were a lot of things done to help them become better players and better people,” Bradley continued. “So I believe in my work ... I just roll up my sleeves and try to show people what I’m all about and see what happens.”

Bradley has spent years working up to this. He coached at the US collegiate and professional levels. And he led the United States to the 2010 World Cup, where his team did better than European powerhouses like England, France and Italy. The US reached the round of 16, where the team lost to Ghana in an extra-time heartbreaker. But not before producing one of the most memorable moments in American World Cup history: a last-gasp winner by Landon Donovan against Algeria.

After the 2010 World Cup, Bradley did what American coaches rarely do: He started testing his mettle way outside his comfort zone, and way outside the US. He coached Egypt in the chaos that followed the Arab Spring. He won praise for choosing to live in Cairo and leading the team through a tumultuous time that disrupted Egypt’s national soccer league. He almost got Egypt to the 2014 World Cup, only to be denied by Ghana again.

More recently, Bradley became the first American to coach in the first division of any major European soccer league, taking the manager’s job at Stabaek in Norway and leading what had been a struggling team to a third-place finish in the Norwegian league.

So Bradley’s international track record is good, if not exactly stellar. And he’s got lots of support from the US soccer community. The question is, can he survive the pressure cooker that is the English Premier League?

Well, it helps that Swansea’s new owners are themselves American. In fact, a number of English Premier League teams are owned by Americans. And a handful of American players have played in England, too. And all of them can tell you that Americans don’t have it easy in the world of English football.

There is a lot of prejudice, in England and elsewhere, against American soccer. People still think of Americans as untested, or worse, as unprepared for going head-to-head with the sport’s elite. Former US national team player Alexi Lalas tweeted about that this week.

What all of this means is that Bob Bradley will have to get results quickly if he hopes to survive as coach at Swansea City. But if he succeeds, he could be opening the way for many more Yanks to crash England’s football party.