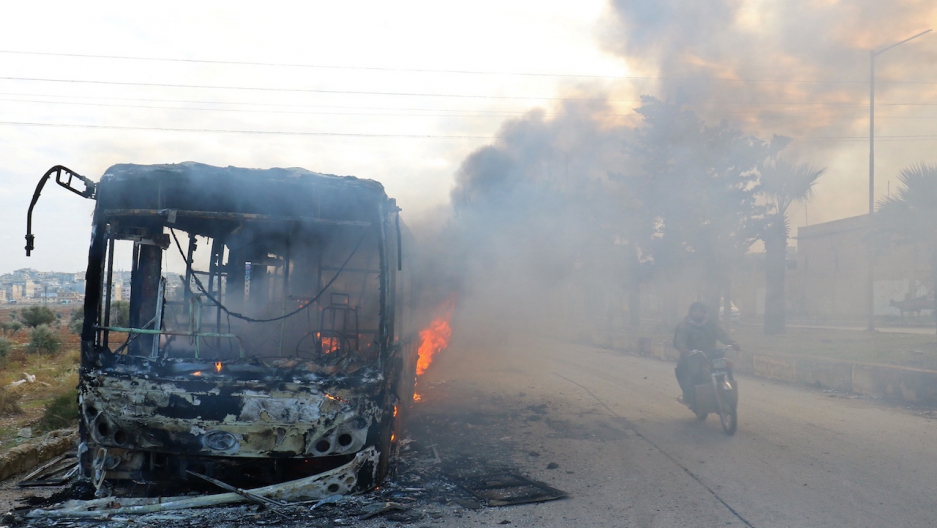 A man on a motorcycle drives past burning buses while en route to evacuate ill and injured people from the besieged Syrian villages of al-Foua and Kefraya, after they were attacked and burned, on Dec. 18, 2016.

As the devastating siege of eastern Aleppo ends, the world watches, parses and argues over the meaning of the media messages being shared by those remaining within it.

We follow the tweets of 7-year-old Bana Alabed and her mother; the last messages of activists and fighters waiting to surrender or die; and seek to verify chemical attacks or conflicting stories about the bombings of hospitals. And at the same time, we struggle to understand whether this information fits into our existing worldviews, or upends them.

The Syrian civil war may be the most documented war in history. Millions of images, videos, blogs, tweets and audio files have been created about the war, the life that continues on in Syria despite the war, and the affiliated refugee crisis. These media — created by journalists, citizens, activists, combatants and victims — are the product of our burgeoning participatory media culture, of the overlay of digital documentation and reflection that accompanies much of modern life.

Syria, prior to the war, had reasonably robust and growing communications technology, with access to mass media networks, satellite TV, internet and mobile data. Access to those technologies gave Syrians the tools both to communicate among themselves and to connect with the rest of the world. Enough remnants of those networks exist now to allow people in conflict zones to continue sharing information. Despite the war (or perhaps because of it), Syrian citizen media networks, with increasing knowledge and skill, have been a major conduit for the documentation of the war.

But access to huge online archives of information about the war doesn’t guarantee that it is organized or presented in ways that accord with our expectations of war reporting. That’s because information in modern conflict isn’t simply about impartially reporting the facts as they occur. Information instead is part of the battle for perception about the war and its combatants. That, in turn, forms opinions about who is just and moral, who is worth supporting politically or with resources, and who will be a target of attack.

Information and its manipulation have been a vital strategic element in this conflict, and the control of information has become a weapon. The Syrian Electronic Army, a parastatal force supporting the Assad regime, in the early days of the struggle targeted activists with "distributed denial-of-service" (DDoS) attacks, hacks and malware. Meanwhile, both the Assad regime and ISIS targeted journalists for their work.

ISIS managed to change the course of the war through the precise, vicious use of violence, especially in documenting the beheading of Western journalists and promoting those videos through media channels.

The fog of war doesn’t simply happen; combatants contribute to it strategically, with their attempts to mystify and confuse adversaries.

Against the forces of misinformation, finding and building coherent narratives about the war is an immense challenge. We now know the principles and techniques for organizing, prioritizing and verifying information coming out of Syria. We can identify facts and establish evidence through careful analysis, and with media forensics techniques such as reverse image search, geolocation and metadata analysis. We can build and maintain trusted relationships with friends, colleagues and sources who are proximate to the conflict.

We can know a lot about this war, but simply knowing facts isn’t nearly enough to change its course. Demonstrated facts do not necessarily influence the outcome of events. That is the essence of understanding power, and its limits.

Ivan Sigal is the executive director of Global Voices.