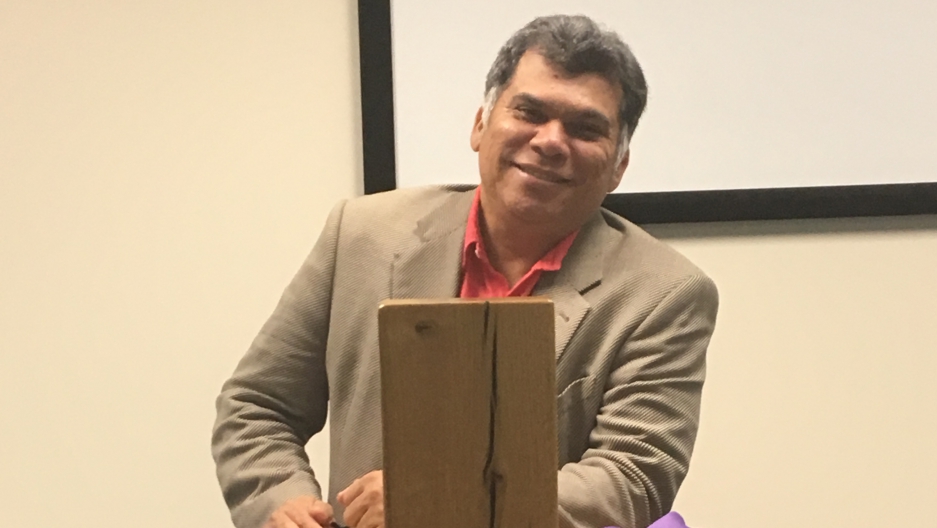 Pastor Williams Arzola says he, too, is trying to find answers about how to deal with a rise in xenophobia.

It’s Sunday in Raleigh. Outside, the trees are shivering in the winter chill. And in a deserted strip mall, the evangelical Iglesia Ciudad De Dios — "City of God Church" — starts its worship.

It’s a young church, with a corporate newness — there’s a screen for spiritual PowerPoint presentations. But there are also rustic, wooden crosses. This congregation is also entirely Latino. Mostly immigrant. Today, they are celebrating one: Pastor Williams Arzola announces that one of the congregants just became a US citizen.

Then, he discusses what’s on everyone’s mind these days — the incoming Donald Trump presidency and the future of immigrants in America. "We are living in uncertain times, says Arzola. "We do not know what will happen after Jan. 20. But I will tell you something you must be sure of," he says. "Anyone can go into that White House, but no one is moving God from his throne. His authority remains strong."

But post-election, there’s another reality. A rise in racism. In the days after Trump’s win, the Southern Poverty Law Center reported nearly 900 incidents of hateful harassment throughout the US. Many against immigrants. This has churchgoers like Ariel afraid and considering returning to Mexico, a place he left years ago.

"I’m not scared," he says, "but I can see what’s coming. This country has always been racist. But Trump ran on a campaign of hate, racism and xenophobia."

A few weeks ago — Ariel, who only wanted to be identified by his first name because of the current climate toward immigrants, says he was helping a woman cross the street. They were speaking in Spanish, and a white construction worker spit on him. He says he’s ready to leave the US.

"Patience." That’s what Pastor Arzola says when people ask him how to deal with racism. The pastor was also recently called in to break up a fight between a Latino and a neighbor who told him to go back to his country. Arzola says "don’t leave. Don’t leave the US. He says the worst way to lose a battle is by not fighting it."

Arzola, who is from Venezuela, also knows that many of his fellow pastors supported Trump. He understands it was a tough election. He himself was torn up as he cast his vote. He asked God for guidance.

But Arzola also wonders what comes after patience. What if deportations ramp up, as Trump promises?

"The church will have to take a stance," Arzola says. "I believe that Jesus Christ was the first activist of our modern times — against the system. Using your faith for activism." And Jesus, Arzola says, "tells us to not forget the poor. The abused. Those who have no country."