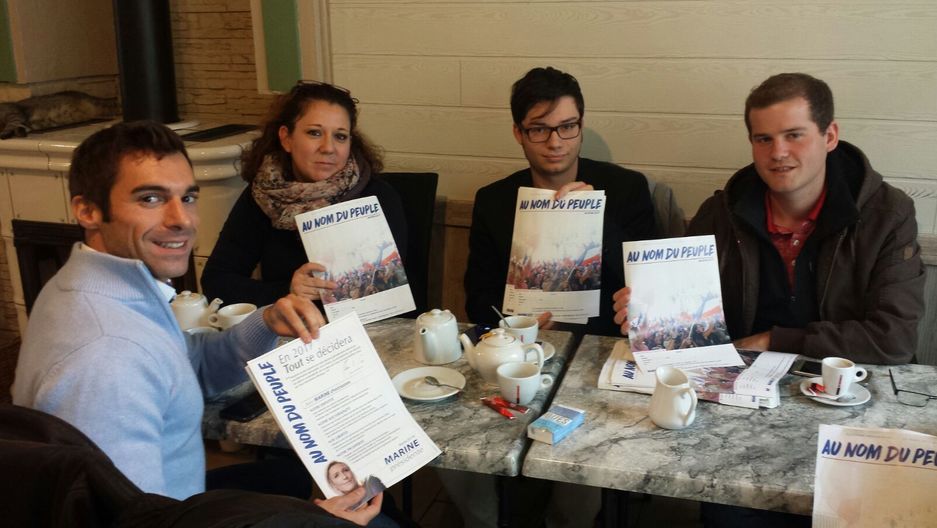 The village of Brienon-sur-Armancon in France holds an outdoor fair every November.

This year, the weather is cold and windy, but some National Front supporters are out distributing their new flier. It reads: “In the name of the People — Marine 2017.”

That's a reference to Marine Le Pen, leader of the far-right National Front party, who is running for president in 2017.

The once-fringe party has been gaining popularity in France, riding a wave of hard-line anti-immigrant sentiment similar to the one that helped fuel Donald Trump's victory in the United States.

“The National Front is one of the only parties that opens up to youth,” he says.

“For me,” Belcastro says, “the party’s most important goal is to restore national sovereignty.”

By that, he means breaking loose from the European Union — its open border policy and its currency, and also stopping what the party calls “indiscriminate, mass immigration.”

At a busy café down the street, National Front supporters are sipping hot drinks. Julien Odoul, who’s a regional representative, says National Front voters are inspired by England’s Brexit and Trump's US victory.

”For all these forgotten French people,” he says, “those we don’t hear and have been dismissed by political parties for 30 years, who see insecurity rise and migrants come in, they can now be heard. We saw this in America with the vote for Donald Trump. This must give hope to all those French people who want change.”

And he says such change would come if Le Pen becomes France’s new president in 2017.

Edwige Jacquet is another supporter. She is a young mother who says she’s against the new French education law that makes studying a foreign language mandatory in first grade, mostly because Arabic is one of the 10 languages offered.

“In our history, we have no direct connections with Muslim countries,” she says, “we have more connections with English-speaking countries or Germany. So, the idea of learning Arabic right from first grade is not sitting well with me. Then in middle school, you learn about mosques and Islam, and this is not part of our religious culture, so, I don’t agree with this being taught to our children.”

Outside on the street, winemaker Christian Cheuillot says he joined the party three years ago, out of frustration. “I got angry because I had a problem with my hands which was not covered by my health insurance,” he says. “A colleague of mine had to pay 150 euros for his wife’s MRI, and the immigrants who came right after him did not have to pay anything.”

His resentment is palpable. But not everyone at the fair today is a National Front supporter.

'Every man for himself'

A retiree called Dominique — he wouldn’t give his last name — says he wants nothing to do with that party.

“For me, Marine Le Pen represents selfishness and the ‘every man for himself' [mentality] and I am not in favor of this,” he says. “I volunteer with a Catholic nonprofit, and for us, the most important thing is sharing and solidarity, and Marine Le Pen does not represent those values at all.”

Up the street, clothes vendor Samir Moula says he would rather not see Le Pen elected.

"I’m not going to tell you that I am with the National Front," he says. "You can clearly see that I’m not."

When I ask why it should be obvious, he points to his face.

Moula is French, of Algerian parents.

“I have a brown complexion,” he says, “and the National Front is not for brown people.”

When I ask National Front representative Julien Odoul about charges that the party is racist and xenophobic, he brushes it off.

Despite this inclusive language, the National Front is a hard-line populist party that sees the world divided between “patriots” and “globalists.” Its leader Marine Le Pen has worked to normalize the party's fringe image since she took over its presidency from her father, Jean-Marie Le Pen, notorious for his strongly anti-Semitic remarks.

But in spite of her efforts, Jean-Yves Camus, a political analyst and expert on extremism, says the party is not likely to gain real political power soon.

At least that’s what many people hope. But the Brexit victory and the election of Donald Trump may suggest otherwise.