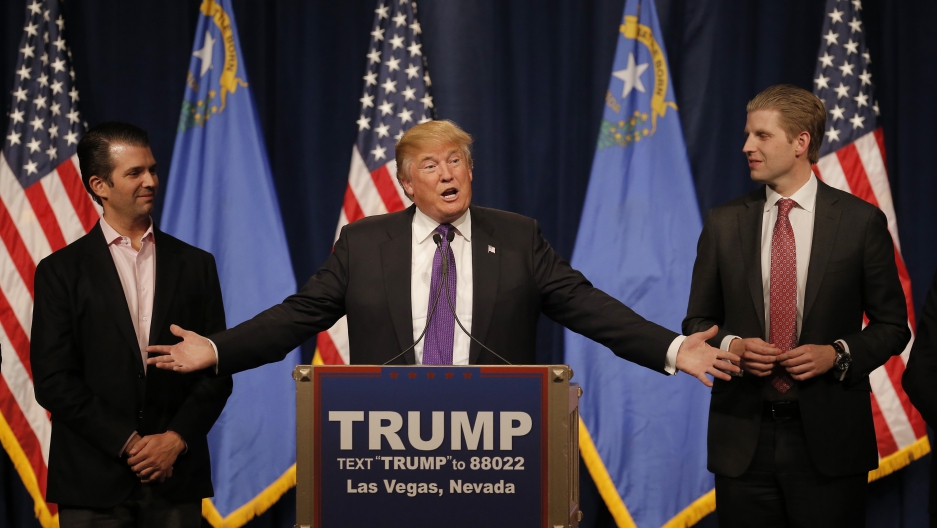 Candidate Donald Trump gestures to his sons Donald Trump Jr. (L) and Eric Trump (R) as he addresses supporters in Las Vegas after being declared by the television networks as the winner of the Nevada Repulican caucuses, Feb. 23, 2016.

It's usually not that hard to ascertain whether a story is fake or not.

Harder to assess are the comparisons that columnists and comedians have been making between Donald Trump — who is not yet president — and some notorious leaders in the history books.

One comparison has been getting a lot of traction. It was first brought to mass media about a year ago by Daily Show host Trevor Noah.

It's basically comparing Trump to African leaders — even dictators like Zimbabwe's Robert Mugabe. It was an intriguing joke at the time.

But since then, there have been more than a few writers comparing the president-elect to some of Africa's longest-serving, allegedly most corrupt leaders. Take Patrick Gathara in the Washington Post:

“President-elect Trump and Kenyan President Uhuru Kenyatta have much in common. Both are fabulously wealthy, the children of privilege with questionable success in business, and both have been accused of fanning ethnic and racial hatred. Both have risen to head their respective countries in the most unlikely of circumstances and in the face of global opprobrium.”

Moorman says the comparison falls down because people in the US do not live in an highly authoritarian society. “Democracy still works in many ways,” she says. “The press is still functioning and there is any number of things that we can still do without having our liberty of expression curtailed.”

There's one area, however, where the comparison is gaining steam.

There is a lot of nepotism at play in presidential palaces across the African continent. And we are seeing a lot of Trump's family in the US presidential transition process — especially his children, who will be running his businesses while he's president. Trump's daughter Ivanka and her husband Jared Kushner have already stirred controversy by joining the president-elect for meetings with Japan's prime minister.

On this front, Moorman does see some parallels with African dictators.

“Angola suffers from many of these problems of nepotism and conflicts of interest in business. The Angolan president Jose Eduardo dos Santos has numerous business interests. His daughter, as well, holds many business interests in Angolan banks and she’s just been named to be the head of the national oil company as of June in 2016,” she says. “This is obviously raising a lot of alarms for Angolans as well as for people outside the country. US diplomats have advised Angolans and the Angolan government not to have politically exposed persons … in the banking sector.”

And now, Moorman says, there’s a contradiction now between how the US State Department is advising Angola, and how president-elect Trump behaves: “He’s violating the very kinds of laws we ask other governments to uphold.”