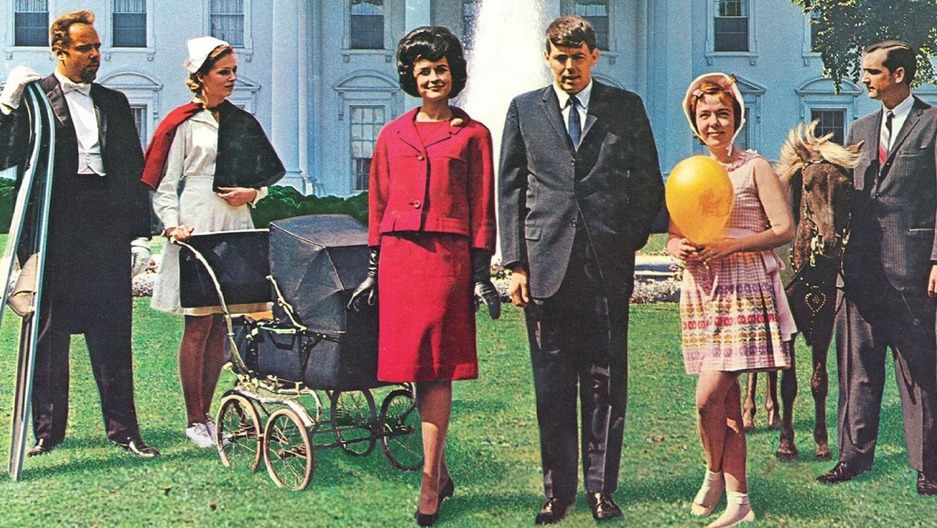 The 1963 Grammy award for Album of the Year didn't go to Tony Bennett, Stan Getz, or Ray Charles--- all runners-up. It went to somebody named Vaughan Meader, whom no one had ever heard of before (or since). Meader was the headliner on "The First Family," a comedy album about the Kennedys written by two other unknowns, Bob Booker and Earle Doud.

Meader, a Maine native, did a terrific a JFK impersonation, and Naomi Brossart nailed the young Jackie's aura of breathless naivet. ("As we go, I should like to point out the various paintings on the wall," she tells a White House visitor. "There's this one, and this one. And that great big one over there!")

The political satire is tame by today's standards. ("Sir, when will we send a man to the moon?," asks a reporter in a press conference sketch; "Whenever Senator Goldwater wants to go," replies the president.) But Bob Booker says that twelve major record labels thought their demo was insulting to the president, and it ended up at the small Cadence Records. The honchos must have been kicking themselves later, because"The First Family" was "the fastest rising album ever, of all time --- a million copies sold in a month," according to comedy historian Ronald L. Smith. That's despite, or perhaps because of, the fact it was recorded at the height of the Cuban missile crisis.

But the style of the album was also novel. Bob Newhart and Jonathan Winters had hit records of their standup routines, and Lenny Bruce was acause clbre, but the sketch comedy of"The First Family"reinvented an old form, with sound effects and multiple voices. It went on to influence Firesign Theater, Credibility Gap, and other beacons of the counterculture.

The record's dramatic popularity came to an end a year later, shortly after a volume two had been released. "My secretary called and said 'Kennedy's been shot,'" Booker recalls. "I said, take them both off the market, and I want them chopped up. I do not want to sit and try to cash in."

If anyone in the Kennedy family found"The First Family"insulting, the grudge is long over. Booker says that Caroline Kennedy approached him directly about giving the masters of the album to the John F. Kennedy Presidential Library in Boston, where they are on display."The First Family"was selected for inclusion in the Library of Congress'National Recording Registryin 2013.

This story was produced by Ben Manilla for BMP Audio.