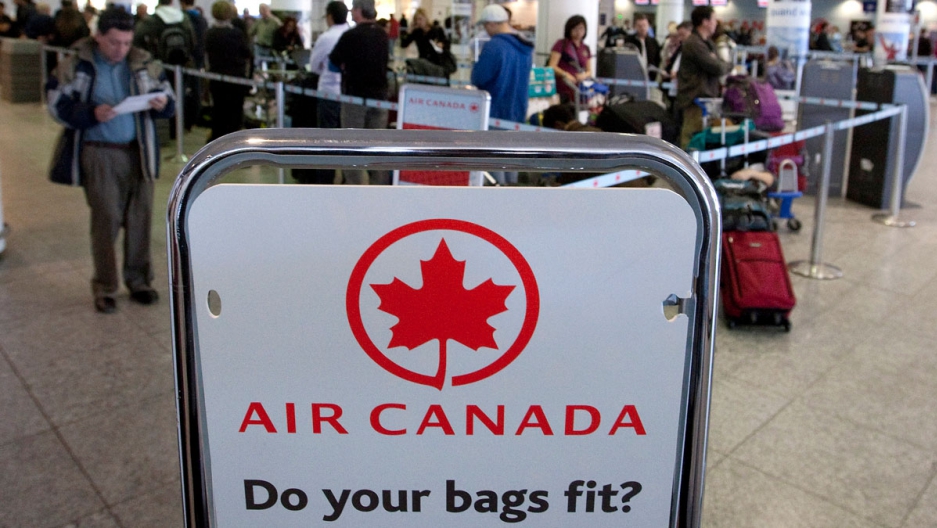 Air Canada travelers wait at the check-in area in Montreal.

My wife, Hana, emigrated to the United States from Kosovo as a child in the early 1990s. Kosovo was part of Yugoslavia back then, as a province of Serbia. She is Albanian, like most Kosovars.

Albanians were always outcasts in Yugoslavia, a country exclusionary in its name, which refers to the South Slavs who comprised the majority of the country. Albanians are not Slavs — which is most pronounced in their language, unrelated to the basket of South Slavic languages across Yugoslavia. Albanians had a range of experiences during their 45 years living in socialist Yugoslavia — a state that was liberal by the standards of communist countries. Some did very well; others faced repression. But ultimately, being Albanian was something to overcome.

In the 1970s, Albanians in Kosovo enjoyed a brief period of normalcy. Kosovo got autonomous status, and students were able to learn in their native tongue. But it all unraveled in the 1980s, culminating in 1989 with the revocation of Kosovo’s autonomy under dictator Slobodan Milosevic.

Albanians became second-class citizens again. Thousands of people lost their jobs and faced vile discrimination. Most Albanians come from Muslim backgrounds, albeit secular ones. And that fact was used against them as a whole, even though many Albanians, including Hana’s father, are Catholic.

Hana’s parents decided to leave. Yugoslavia was beginning to fall apart in a series of wars, the worst being in Bosnia. Kosovo was at peace at the time, though still a dangerous place for Albanians, under the boot of a police state.

They first went to the United States. Both are college-educated and had worked in the arts, but in the States they took whatever jobs they could find. They worked in construction and served coffee at Dunkin' Donuts. Eventually they moved to Canada because of its more liberal immigration policy. The path to citizenship was and still is faster there.

Hana and I met in Kosovo in 2012, when she moved back from Toronto. She wanted to shape the future of her young country, which had endured a war in 1999 and declared independence in 2008. By the time we got married this past June, we had more or less concluded that we wanted to raise our future children somewhere else. While Kosovo has done markedly better than other recipients of US military interventions — among other things, it’s at peace — it still has a long way to go.

The decision was particularly painful for Hana, who had returned to Kosovo with a sense of duty and patriotism. The troubled education and health systems were the dealbreakers for us. It just didn’t seem fair to impose that on our children, with a father who is an American and a mother who is a Canadian.

I was hoping we could settle in the San Francisco Bay Area, where I grew up and my parents still live. Hana favored Toronto, where she had gone to college and graduate school, and where her parents and sister live.

Related: Thinking of ditching America? I did. Here's how.

Regardless of where we ended up, I’d hoped at some point to become a Canadian citizen. Universal healthcare, of course, is a great perk. I looked into this in more detail once we got married, and put it on the back burner. I had naively thought that being an American and marrying a Canadian would make becoming a Canadian citizen a formality. It’s not quite that simple. I’ll even need to take an exam to prove that I know English.

I woke up here in Pristina last Wednesday morning, shellshocked by Donald Trump’s victory, like a lot of people. I wasn’t just shaken by the realization my country had elected someone who didn’t share my values, and had gotten elected through bigotry and showmanship — or that my beloved subsidized Obamacare plan might be at risk. It was something deeper, more personal, and frightening: That my wife and future children could someday be subjected to “extreme vetting,” or not welcome in my country at all.

Hana would probably be considered a Muslim in Trump’s world, even though she is essentially an atheist. So is her mother, who was born in a small city in Western Macedonia. Their “Muslim” family is as secular as they come.

When I met Hana’s uncle for the first time a few weeks ago in Macedonia, he poured us glasses of Johnnie Walker. Albanian Muslims are a diverse group of people. Most are not that religious, and they largely love the United States more than the average American. Some of the worst Islamophobic comments I’ve heard, in fact, have come from Albanian Muslims themselves, who engage in the same kind of fear-mongering about extremists as Trump and his supporters have.

I suspect all of that will be moot, and that Albanians, including the devout Christians, likely will be caught in this new dragnet. I know Kosovo Albanians who have been detained for hours when traveling to Israel simply because of their name, or for coming from a largely Muslim country. It would actually be smarter to make a point of not screening Albanians. During World War II, Albanian Muslims courageously rescued and sheltered more Jews than were killed by the Nazis and their puppet government. Serbs were not alone in responsibility — nearly every major group played a part — but they contributed the most from their position of dominance.

My parents-in-law saw the writing on the wall and wisely left Yugoslavia. It meant that Hana was able to leave on a plane with her grandparents to the US, instead of being forced on a train to a refugee camp in Macedonia, as hundreds of thousands of people were in 1999.

The United States isn’t Yugoslavia of the 1990s. But there are eerie parallels. Slobodan Milosevic fanned the anxieties and worst prejudices of Serbs in much the same way that Trump has with working class whites. Serbs were the largest group in Yugoslavia. They dominated the largest republic, Serbia, where the capital was located, and had large minorities in the other parts, particularly in Croatia and Bosnia.

Serbs had the most to lose from the breakup of Yugoslavia, just as white men do in the demographic shifts happening in the United States. In the former Yugoslavia, the result was thousands of deaths, and the worst atrocities in Europe since World War II.

I hope that my fears are proven wrong, and that the Donald Trump that millions of angry white men voted for is not the same Donald Trump who becomes president in January. Albanians were resisting Milosevic’s regime peacefully when my in-laws left, hoping to avoid the catastrophe that was befalling nearby Bosnia. But Hana’s parents weren’t willing to take the chance, and neither am I.