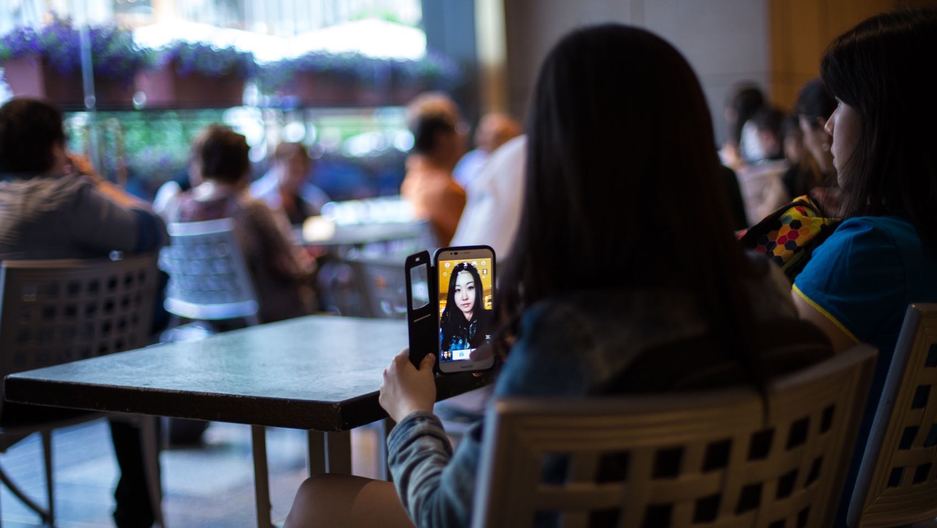 A woman takes a "selfie" from a cafe.

A woman I know was dishing about her work at a dinner party I was at recently. She’s a food stylist. Her job is to do whatever it takes to make food aesthetically appealing and appetizing when it is photographed. And I mean, whatever!

Those beautiful, roasted Thanksgiving turkeys in the magazines are only partially cooked so they appear plump and moist, not wrinkled and shrunken. Seared raw turkey, anyone? Uh, no thanks. And those glistening beads of condensation on that cranberry cocktail pictured next to the turkey recipe are, in fact, a spritz of glycerin and water. And the ice in the glass, it’s all fake. Cheers!

Back when the woman started as a stylist, all the food needed to be picture-perfect. Her first job in the industry was to cut pieces of pineapple into uniform triangles. That’s not something she would ever do now. These days, she says, what is in fashion is for food to look alluring, but rustic. It needs to have that slightly imperfect, je ne sais quoi to signal it is real and wholesome, even if all sorts of trickery went into achieving that so-called "authentic" presentation.

This whole election season, the word authentic hovered in the background. Politics have become as researched and staged as one elaborate food photo shoot (even a rustic one). We recoiled if a candidate acted out of character or was ever revealed to have changed their opinion about something. Yet, we obsessed about which politician was the most real, authentic and likable. At the end of it all, we scratched our heads at the softer Donald Trump that emerged to give a victory speech. But even in our own lives, we seem to have lost sight of what authenticity means, who we are at our core. To begin with, we constantly sculpt and perfect our own images on social media.

I read an article the other day, quoting someone who said she thinks twice before posting on Facebook. I thought it was interesting because her hesitation wasn't about racking up as many "likes" as possible. Rather, she questions whether she’ll want to see the post resurrected as a Facebook Memory when she is having a bad day. To me, this was proof we have become our own “target voter” that we are trying to win over, in our own little, personal popularity contest.

Despite what our styled, curated "selfies" might telegraph, the truth is we are complex creatures with lots of different sides to ourselves. It’s something I’ve tried for years to hide from myself, as I fancy myself someone who is consistently, reliably me. But I can’t even hide my multifaceted personality from the new iPhone operating system.

The recent update of the iPhone software, iOS 10, has this feature that scanned through all my pictures and then, tried to group them by person. My brothers, my closest friends and pretty much everyone I have snapshots of has different looks that confused the iPhone’s facial recognition algorithm so much, it thought we were all multiple different people. There were three distinct versions of me.

First, there is my professional self in headshots and in pictures from conferences and meetings. Then there is “resting bitch face” me — like when I’m lost in thought, distracted or focused. It’s a state I’m apparently often caught in. And finally, there is the me that can be seen clowning around in the snow or doing yoga poses in odd places.

Hairstyles, clothes and glasses confuse the algorithm. However, it is latching on to something deeper about the ways we present the different facets of ourselves and our personalities.

But, there was one face that was uniformly grouped together. He is one of my "favorite people" according to my phone, since he showed up so often. The thing is, he’s a sketchy guy.

I mean that literally. He’s just a sketch of a face. It caught me off guard because I had no idea who this sketch was of and why I had so many of them in my photo library. Then it became clear: He was the illustration on a bunch of handouts from my doctor's office, demonstrating stretches for my stiff neck, which I'd snapped photos of for future reference.

Sketch guy is perfectly consistent no matter which way he’s stretching his pencil-drawn neck, something my iPhone instantly recognized. But, he sure is not an authentic person. I can’t tell you how many times I’ve done something where I barely even recognize myself. If I hardly know my own self sometimes, why would I expect my iPhone?

That’s the thing about life in 3-D. It’s complicated and varying. Our personalities come in shapes and shades that sometimes fool our friends, our iPhones and even ourselves.

My iPhone doesn’t recognize this variation that is part of who each of us are. But despite how we judge people in the public eye, deep down we see that the depths, nuances and inconsistencies of our personalities are ultimately what makes us genuine human beings.

We've apparently moved past a need for perfect, uniform pineapple in food photography. I'm hoping we can become OK with the variety in ourselves and our fellow humans someday, as well. There’s a certain beauty to the way we shape-shift to suit situations and the people around us. Because that’s what makes people interesting, even the ones we've known forever. It means that — for better or for worse — there’s always something new and surprising to discover about our longtime friends and even possibly our elected officials.