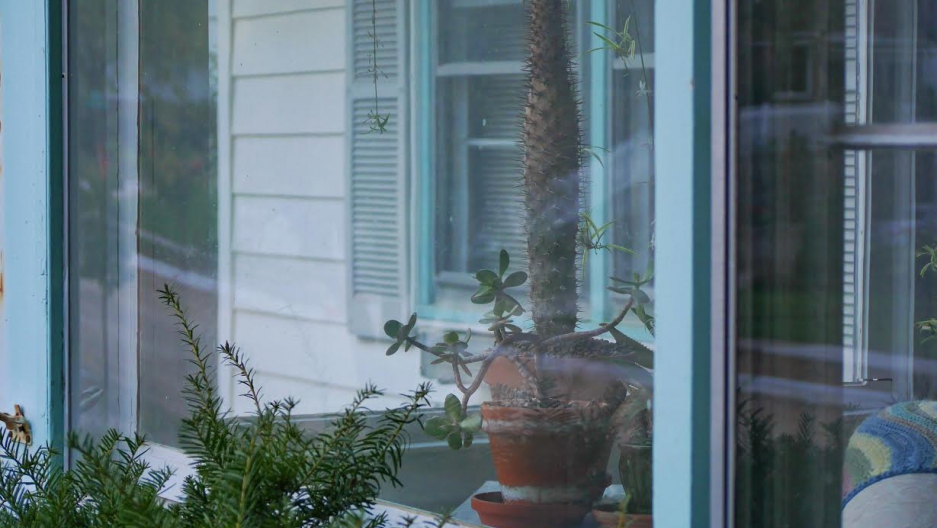 This type of blue trim is supposed to ward off the "haints,'' or the mean ghosts, as Southerners call them. Does it work for this Southern-raised writer?

It shouldn't be a surprise I live in a house with haint blue trim. But chances are if you aren't from the South you have no earthly idea what I'm talking about.

My people aren't Southerners, but I grew up there. I avoided the accent and went up North for college, but some cultural traits stuck with me —  a propensity to use the word y'all and an affinity for a certain shade of blue used to ward off haints.

Sure I could have repainted, but it just seemed right to keep the haint blue exterior trim, even though I've never been one to believe in ghosts.

Vampires were the thing that went bump in my night. I would have painted my bedroom any color on the planet to keep them away.

I was terrified of them. In sixth grade I saw a science fair hologram of a vampire biting a woman's neck. I had insomnia for a year. I'd only sleep on rainy nights. Lord knows why I believed that vampires wouldn't go out in the rain. But I did. Other nights I'd pile pillows on my neck and stay up all night terrified.

If I'm honest about the men I find attractive, they look like vampires. Before he aged out of it, my husband was a dead ringer for one. (Dr. Freud, phone call on line one.) Those prepubescent fears were of course about something even more disturbing to me than vampires — my budding sexuality. Not monsters, duh.

As Halloween gets closer, I've been thinking a lot about why we chose our scary monsters. Monsters are frightening by definition, but somehow they usually protect us from something even scarier.

Take the city of Prague. There it is the Golem. Golems are men made of clay and brought to life by a secret Jewish incantation. They have incredible strength and will do anything for their master. The problem is they can become an uncontrollable violent force.

The legend has it that in the 16th century a Rabbi in Prague created one to protect the Jews of the city's ghetto. As violent purges raged in cities all across the region, the Jews of Prague stayed safe. But as it always happens with monsters, things eventually get out of control. The Golem turned on innocent people. It went on a rampage. And it had to be destroyed by its creator. Its remains supposedly sit to this day in the attic of the New Old Synagogue (that's its real name), though of course no one can prove that.

In the years since Prague could have been destroyed over and over again — in World War II, by the communists, by revolution. But it wasn't. Has the Golem been brought back to life from time to time to protect from scarier outside forces? You never know, right?

In contrast, Detroit has seen misfortune after misfortune. Bloody battles, fires, riots, economic devastation and more. Each time some Detroiter or another catches sight of the Nain Rouge before the catastrophe hits. This red dwarf is the harbinger of all bad things Detroit. Each year the city's citizens hold parades to drive him out. But Nain Rouge has gained some defenders recently because if you look back at the Native American legends, you'll find he's actually a protector and guardian of the city; a spirit who warns of future troubles rather than causes them. For a city where every path forward out its economic ruin is a double-edged sword, it's no surprise that its resident demon is a complicated character.

The monsters of Iceland are a fun cute twist on all this. But then everything in Iceland is just sort  of sweet. The hidden people — fairies, elves, and other creatures — live in the rocks and hills. They're mostly friendly. A little mischievous at best. People even woo them — building tiny houses for them out back. While little people that can pop up unexpectedly aren't necessarily the most comforting proposition, when you live somewhere where the sheep outnumber the people and the winters are long, loneliness can take a big toll. The hidden people at least are there with you. I suppose the thought of odd little creatures hiding in the rocks and crags is less scary by far than complete isolation.

Before I was afraid of vampires, I mildly feared the Bell Witch. Everybody I knew was terrified of her. So I tried to get myself worked up. I just never could. The Bell Witch is another Southern thing — specifically a Tennessee thing. You stand in front of a mirror at midnight. You spin around 13 times while saying you hate her. Then she’ll appear and scratch your eyes out! The Bell Witch loomed large in the imagination of Southern girls. Did this haint originate as a way to keep Southern belles tucked safely in bed away from potential harm at the hands of a plantation's enslaved men? For whatever reason, the Bell Witch always seemed like a poltergeist who wasn't meant for girls like me, despite the terror she instilled in my friends.

To be scary, I suppose a monster has to resonate with something deep within us, within our culture or within our life predicament. But at a certain point you don't want to take chances, right? If blue paint will keep the haints away, I'm all for it.

I still sleep best on rainy nights, you'll never catch me chanting the Bell Witch's name at midnight, and for what it’s worth I keep a look out for the Nain Rouge whenever I’m in Detroit.

Tamar Charney, Nashville raised, is program director for Michigan Radio. She has a habit on eavesdropping on people in restaurants and has a thing about Iceland. See her previous commentaries here.