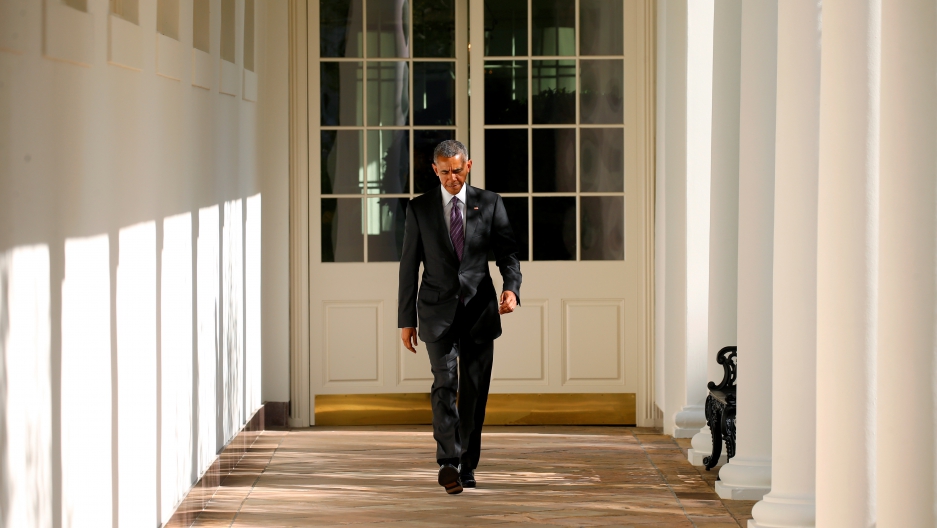 US President Barack Obama walks toward the Oval Office of the White House in Washington on Nov. 8, 2016.

President Barack Obama spoke from the White House at about 12:20 p.m. EST Wednesday, following Donald Trump's victory in the US presidential election.

Watch video of his remarks here, starting at minute 35:

While Trump surged ahead of Clinton in electoral votes, the Democratic candidate did win the popular vote, with a slim majority of total ballots cast in her favor.

Still wondering how this works? Here's a quick primer on the US election system, via AFP:

How the voting system works

The vote, by universal suffrage, is conducted in a single round in all 50 states and the District of Columbia (the city of Washington, which is not part of any state).

Voters choose among the candidates for president and vice president. The popular vote in each state determines the selection of a set of members of the electoral college, who pledge to support a given candidate.

There are 538 members of the electoral college, with the number from each state based on its population size.

A state has one elector for each of its members of the House of Representatives, and one for each of the state's two senators.

California -- the most populous state -- therefore has 55 electors, Texas has 38, and New York and Florida have 29 each. At the other end of the spectrum, lightly populated Alaska, Delaware, Vermont and Wyoming have only three electors each, as does the District of Columbia.

Members of the electoral college officially elect the president and vice president on December 19 in what is a mere formality.

What does it take to win?

The successful candidate must amass 270 electoral votes, an absolute majority of the 538 electors.

In all but two states, the candidate who carries the majority of the popular vote wins the support of all the state's electors. Nebraska and Maine use a split system, in which two electors are chosen by popular state-wide vote and the remainder are chosen according to the popular vote in each congressional district.

The winner-takes-all system in the states makes it extremely hard for a third-party candidate to prevail, although they can still have critical impacts on certain states and therefore on the national result.