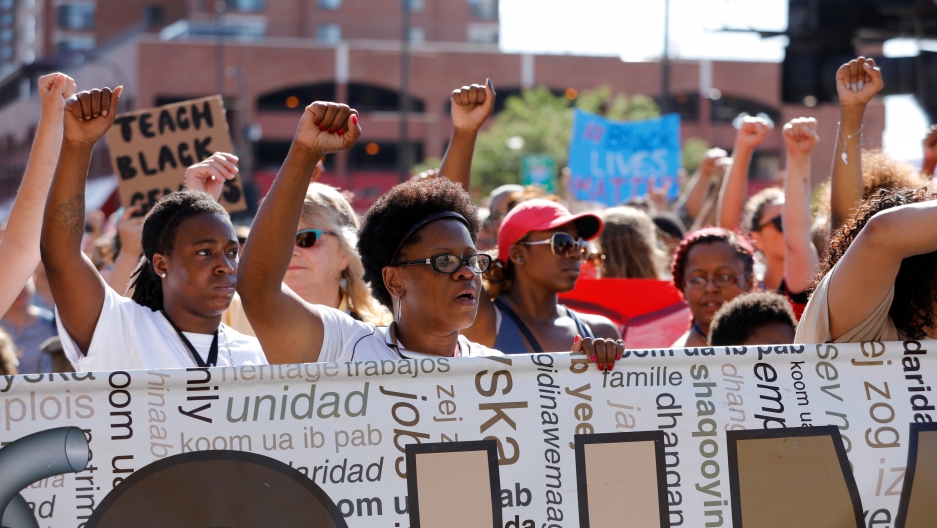 Though he has lived in many cities around the country, Russel Balenger’s only real home is the Minneapolis-St. Paul area, the place where he was born and raised

“They call it the land of milk and honey, but it isn’t like that for all of us,” says Balenger, a community activist and self-described “circle keeper,” says of the Twin Cities.

“The area that I’m in is sort of the belt of the city,” Balenger says. “It’s a very diverse area — black and white, young and old, Christian and Muslim and Buddhist.”

But it’s not all milk and honey.

“Minnesota is number one for disproportionate minority contact in the United States,” Balenger says.

Racial tensions in the city have only increased since the fatal police shooting of Philando Castile in a suburb of St. Paul. Castile, who was stopped for a broken taillight, notified the officer he was carrying a handgun with a permit, and was subsequently shot. The exact circumstances remain subject to dispute, but the immediate aftermath of the shooting was broadcast to Facebook Live by Castile’s girlfriend, Diamond Reynolds.

Though Castile’s death galvanized America over the summer, Balenger has been working to address these issues head on for years. In 2010, he started the Circle of Peace Movement to improve community relations with police. Since then, he’s organized more than 300 Circle of Peace meetings.

“Every Monday, we sit down in a circle, we have a meal and we begin to have a community conversation,” he says. “The group is representative of privileged [people], Muslim, Jew, Latino, Native American, White, Black, African. You name it, they’ve been in the room.”

“And everyone’s getting their voice heard,” he continues. “We talk about things that need to change, about our families, and the things we care about. We talk about what concerns us and what makes us afraid.”

“We’re hopeful and we think it’s making a change,” he says.

Throughout his lifetime, Balenger has seen the Twin Cities change greatly. He remembers in the 1960s when the I-94 freeway was through a neighborhood known as Rondo, the heart of the black community in the Twin Cities. The US government now acknowledges that many American highways were intentionally built through low income and predominantly minority communities.

“[It] basically stripped out the center of that community,” Balenger remembers. “Homes were taken and my family was one of those families.”

White flight was seen in other places, too, like Baltimore, Chicago, Detroit, New York and Los Angeles But it seems that the trend is finally reversing around the country, and in Minneapolis, too.

“People are moving back in,” Balenger says.

The Twin Cities are seeing continued growth: St. Paul is the nation’s 64th-largest city and Minneapolis is the 46th-largest city. Combined with their sprawling suburbs, the cities are home to more than 3.5 million people as of 2016.

“The downtown areas are seeing a lot of revision, a lot of revitalization,” he says. “But there’s still a lot of things that could be better.”

Balenger believes a  juvenile offenders’ facility shared between Minneapolis and St. Paul is “plaguing the community.” He calls the initiative an $18 million prison for children.

“If they build this facility with 165 beds, they plan to fill those beds,” he says, arguing that such a facility won’t support the broader push away from mass incarceration.

Yet, despite the issues facing the Twin Cities, Ballenger says that he doesn’t want “it to seem like all doom and gloom.”

“As we have gotten to know each other, we’re finding out that we are more alike than unalike,” he says. “And that’s bringing about a beauty in the city that is new and fresh.”