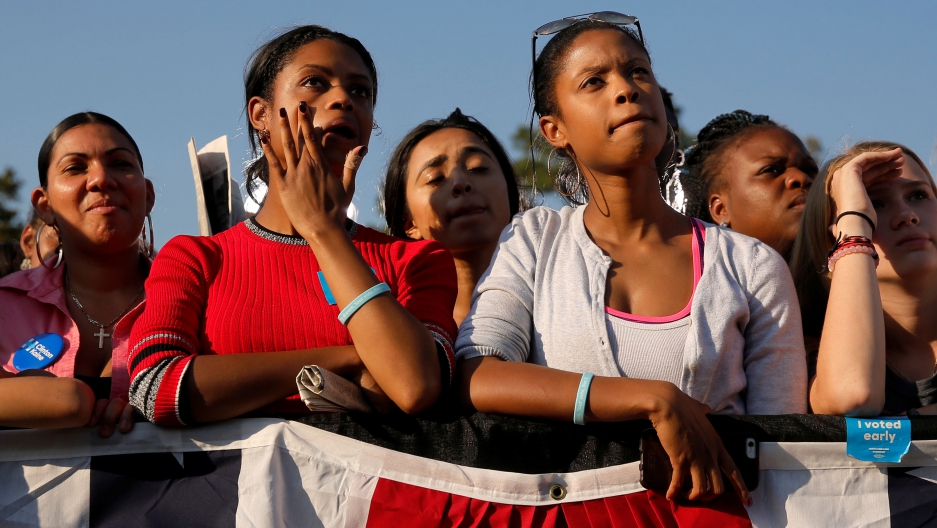 A woman wipes away tears as Obama delivers remarks at a campaign event in Chapel Hill, North Carolina.

From sexual assault allegations against Donald Trump inspiring women to share their own experiences, to the overall feeling that politicians in general cannot be trusted, this election has brought up a lot of difficult emotions for many Americans.

Among millennials, many of whom are still new to the reality of politics, this emotional roller coaster can be tough. This became evident in our millennial-focused UnConvention Facebook group, when member Anne Blair asked the group for some much-needed advice regarding her feelings on the election.

"Need a bit of moral support, so please be kind :)," wrote Blair. "I was planning on voting third party this election, but I feel as if I've lost my fire. I understand I moved to a very red county in Georgia (16% voted blue last election), and I love it here. I have a progressive mindset and tend to describe myself as liberal libertarian (weird, but it works)."

She continued, "I've been trying to get involved here in the community, which is hard when the whole county is a small town. I stay at home, am in school, and between my dad's post-stroke appointments and my son's therapies, I really can't get out — so I'm active in the local Facebook discussion group. The last few political posts in there turned just straight disgusting."

"One commenter had it listed she worked for Planned Parenthood, and she was asked how much she sells babies for and if she gets to rip and cut them up while she works," Blair wrote. "I enjoy discussions. Throughout all of the threads, I am civil (though I've reached sarcastic) and try to cite as many sources as possible. But all it's done is reinforce my experience that those that lean right just won't do reasonable — discussion or otherwise. ... I wasn't going to vote [for Hillary] because I didn't want to tacitly support a system that has a primary that uses super delegates and other backhanded tactics to suppress viable candidates. I still don't. I'm not going to vote Trump because his tax policy puts us in further debt and he's just a narcissistic overgrown child. ... So, can anyone help me find my third party fire? I am exhausted with the two party system."

It took only minutes for other members to respond to Anne Blair, both with kind words and practical advice.

"Follow your heart," wrote Jessica Lynn Hansen. "I'm a Bernie supporter and voting HRC. Not ideal, but it's the only option I can personally live with."

"That's an understandable predicament," wrote Will Whistler-Brown. "I'm voting for Clinton, but mostly because I think a peaceful transfer of power to at worst a centrist is more desirable than any other outcome."

READ MORE: What the world is saying in our global straw poll on the US presidency

Others gave Anne Blair more information, so she could feel confident in the decision she'll be making on November 8.

Be part of the UnConvention World Vote

Have your vote counted in 2016's first global straw poll for US president
Vote Now!

"I think it's important to remember that nothing can get done in the White House without Congress," wrote Jordan Jesus Tiger. "If you're dedicated to your third party candidate, look into the issues they're voting for and look at the candidates in your area that has similar stances."

"The way I see it, voting is not about expressing yourself but choosing what vote is best for the American people and the whole world. If you think that HRC is the best choice for president or resoundingly defeating Trump is the most important thing, than vote for her. If you think that making a statement about third parties will do the most good, then do that. I totally support you going for the third party lane even if I didn't, because that's your right and you should be encouraged and excited to support whatever stances align with your beliefs and morals."

"Sorry that you lost some of your fire. As a political science graduate, I've never been so exhausted and burned out with politics (and I've been studying them since 2006). So yeah. I totally get the burn out and the frustration. Take a step away from the heavy hitters and see who's running locally and see if they come together or align. You might be destressed from the chaos that is presidential election."

So, what difference do these conversations make in the lives of millennials? Well, in Anne Blair's case, they've given her the courage to stand by her convictions.

"I love this group," she said in a follow-up email. "Having a place where I can talk politics and expect absolute civility, even when it gets heated, and how we self-monitor for the most part is such a boon. ... This conversation led to introspection. I remembered why I'm mad at the DNC. I remembered why I'm against this two-party system. I'm voting third party, because if I don't start the change and if I become complacent with a 'lesser evil' vote, I'm afraid I'll help perpetuate a cycle I'm trying to help break."

Let us know how you're making your voting decision — and let us know your generation, millennial, X, boomer, or whatever — in the comments below.