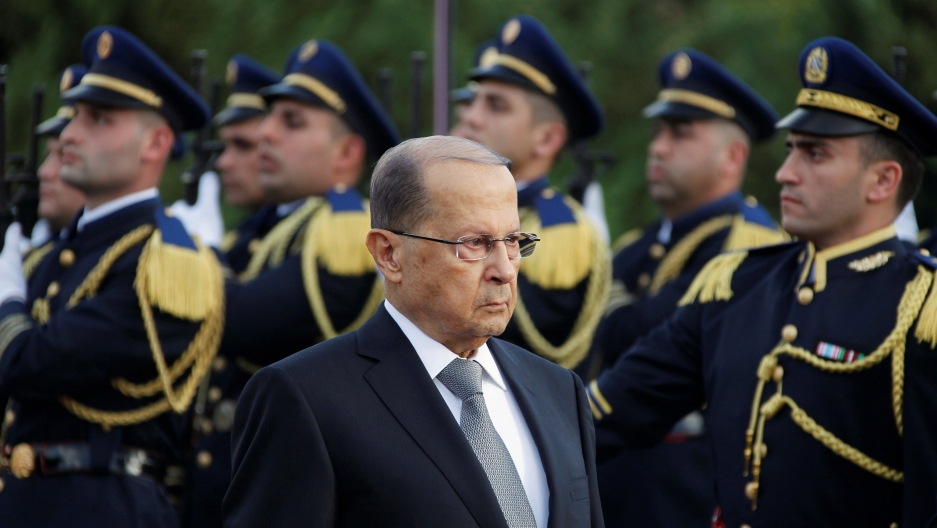 Lebanon finally has a president, after 45 failed attempts by the country’s parliament to vote and 2 1/2 years without a head of state.

Michel Aoun, 81 years old, is a Maronite Christian politician, a former army chief, and an ally of Hezbollah, the Iranian-backed political party and Shiite militia. He’s been eying the presidency for decades.

Aoun’s victory brings an end to Lebanon’s 29-month political vacuum, which hampered progress at a time of rising insecurity due to the war in neighboring Syria.

“Lebanon is passing through minefields and has been safe from the raging regional fires, and we will prevent any spark from reaching it,” Aoun said after being sworn in on Monday.

Fireworks and celebratory gunfire rang out across Beirut as the country inaugurated its first president since May 2014.

The United States government greeted the news cautiously. Aoun’s election is a “moment of opportunity, as Lebanon emerges from years of political impasse,” State Department spokesman John Kirby said in a statement.

But Kirby urged the new president to “uphold Lebanon’s international obligations,” referring to United Nations resolutions calling for Lebanon’s militias to disarm — something Aoun’s ally Hezbollah has not done.

In Lebanon, power is shared among the country’s largest religious groups: the speaker of parliament is always a Shiite, the prime minister a Sunni and the president a Maronite Christian.

These posts are filled on the basis of consensus among the country’s major political parties — something that has been hard to come by as divisions in the country have deepened during the Syrian civil war. The parliament attempted to choose a president 45 times previously, but various parties blocked the vote by not showing up.

The legislature finally succeeded, only after two more attempts were voided due to extra ballots appearing in the count.

And not all the lawmakers seemed to take the task seriously. One cast a vote for Lebanese pop singer Myriam Klink, and another picked fictional character “Zorba the Greek.”

Aoun's victory caps a long pursuit of the presidency, in which he's shifted alliances, changed positions, and built bridges with former enemies.

As Lebanon’s top general, Aoun led bloody battles against rival Christians and the occupying Syrian army in the latter days of the country’s 1975-90 civil war. In 1990, his failed “War of Liberation” against the Syrians forced him into exile. While in France, he remained a vocal opponent of Syria and Hezbollah.

Aoun returned home in 2005, after the Syrian army pulled out of Lebanon, and made a political U-turn. He joined a pro-Syrian alliance with Hezbollah and, in 2008, visited Syria to repair ties with its government. He later received an endorsement from Syrian President Bashar al-Assad to be Lebanon's president.

Despite its military power, Hezbollah’s support could not deliver Aoun the presidency. For that, Aoun won support from rival Christian leaders and former Prime Minister Saad Hariri, who leads the largest Sunni bloc in the country.

So what does Aoun’s election mean for Lebanon?

For Aoun’s supporters, it’s a chance for stability after prolonged gridlock. They argue that his large base gives Christians a strong voice, and his ties across the political spectrum give Lebanon an opportunity to bridge its internal differences.

Others are optimistic for an economic turnaround.

“This will revive our economy and will stop it from collapsing further,” Amanda Abou Abdallah, a 30-year-old filmmaker who describes herself as independent, wrote on Facebook. “It will also put an end to the governmental freeze, paving the way for a new government and finally elections.”

“For all those who criticize the ‘non democratic’ election,” she added, “we do not live in Switzerland, this is Lebanon and this is what consensus democracy looks like and this is the best outcome we can expect from this system.”

But some analysts see Aoun’s rise as a boost for Hezbollah — whose military wing is designated a terrorist organization by the US — and, in turn, for Hezbollah’s allies Syria and Iran.

“Aoun’s election is a clear victory for the pro-Iranian axis in the Levant and another climb down for Saudi Arabia,” wrote Paul Salem, vice president of the Washington-based Middle East Institute.

The civil war in neighboring Syria is having a dramatic impact on Lebanon. The country is home to more than 1.2 million Syrian refugees — the highest per capita concentration of refugees in the world.

Read more: When a bomb goes off in Lebanon, Syrians suffer

Domestic problems including a garbage crisis that blew up in 2015 and led to major protests against government dysfunction have yet to be resolved.

Today, some see the aging president’s election as a continuation of Lebanon’s broken politics, in which civil war-era leaders trade power and influence to the detriment of the country.

“I am sadder than ever. Never had the chance to vote, & the civil war warlords & billionaires still rule us,” Kareem Chehayab, a writer and musician, said on Twitter.