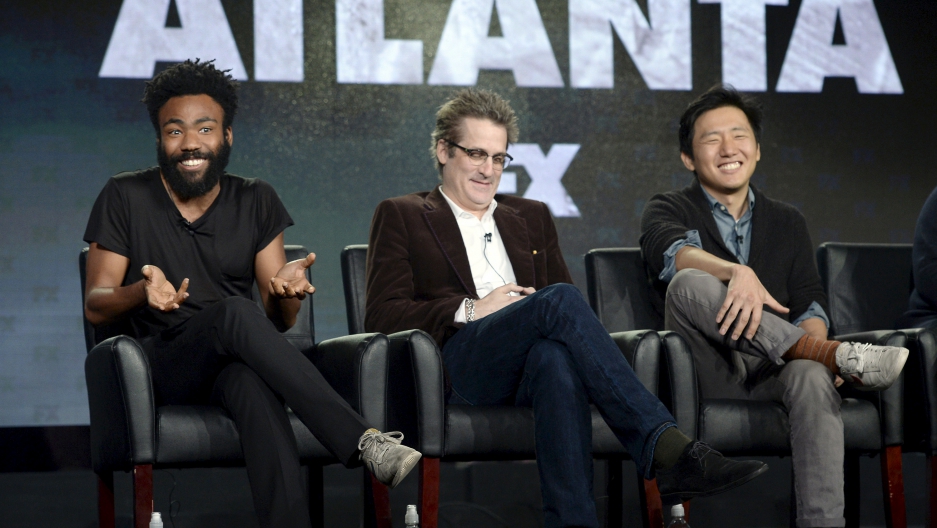 Donald Glover, left, talks about the FX Networks new comedy series "Atlanta" during a press tour in January, 2016, with executive producer Paul Simms and director Hiro Murai. In 2010, the #Donald4Spiderman campaign didn’t get him the lead role, but it did get him attention and he was cast him in other roles.

David Rapaport, a casting director for comic book-inspired shows like The Flash, Arrow and Supergirl, loves interacting with fans on social media.

Many people have recently congratulated him on his work on 100 episodes of Arrow, a milestone that the CW series will hit in November. Supergirl fans were thrilled that the show cast Lynda Carter, who played Wonder Woman in the 1970s series, as the president of the United States in a recent episode.

Rapaport also gets the occasional pitch from actors who’d love to be considered for roles or are looking for advice from a seasoned professional. But more often than not, it’s the fans who have the strongest opinions about casting.

For the most part, the exchanges are positive, though he admits he can take it personally when overbearing fans inundate him online with criticism over a casting decision.

“We’re all just doing a job. My job is to interpret these roles separate of what the mass audience thinks. We also have to consider things like availability, affordability and, also, tonally, whether the person is right for the vision of the project. So sometimes my pick gets cast, and sometimes it just doesn’t work out.”

Fans have long had opinions about which actors they’d cast in canonical roles, but now they are becoming savvier about launching social media campaigns and hashtags that not only become a part of mainstream discussion but also get the attention of the industry. Rapaport included.

In September, #RyanPotterForTimDrake rallied behind Ryan Potter (the Supah Ninjas actor most known for voicing Hiro in Big Hero 6) to play Tim Drake, the third Robin in the Batman series. It began trending despite the fact that there has yet to be any mention of a Robin storyline in the upcoming Justice League film. Within a week, Potter filmed a Tim Drake action concept video in response to fan enthusiasm. The campaign got so much attention that it was covered by Entertainment Weekly and Hollywood Reporter.

An anonymous “Asian American person in the industry” leaked to the popular Angry Asian Man website this month that an early draft of the upcoming live-action Mulan film had replaced her Chinese army captain love interest with a white merchant, which prompted a quick reaction online. The online advocacy organization 18 Million Rising started a “#MakeMulanRight” petition.

Disney quickly released a statement to clarify that "all primary roles, including the love interest, are Chinese." Yoshi Sudarso fans, who had been daydreaming about the Power Rangers Dino Charge actor as Li Shang ever since the adaptation was announced back in March 2015, stepped up their #YoshiForShang campaign. They tweeted side-by-side photos of Sudarso and Shang and encouraged each other to tag Disney to get the studio’s attention.

#makemulanright after being a fan of yoshi for a while, there's no one that can do li shang better than @Yoshistunts #yoshiforshang pic.twitter.com/Go4VQ3mSRU

“Though I can’t say that I’ve ever cast anyone based on these fan campaigns, it does get my attention,” says Rapaport. “Sometimes they’ll be people that I do consider for the role or people who were already on my list. But if it’s someone I’ve never heard of, I’ll certainly go look them up and get to know them a little bit better.”

Becky Wu, an actress who also works as a casting director for David Kang Casting, wants to remind fans that casting directors are just the gatekeepers in the complicated casting process.

“Ninety percent of the actors I bring in are people who fit the specific requests of our clients,” she explains. “But I’ll always try to bring in a few people who don’t quite fit the description, to open their eyes to different options. I know that as an actress, there have been times where I went in to read for a character that I didn’t quite fit — but if I make an impression, they might cast me anyway. Or they’ll bring me back later when they’re casting a different role.”

She’s also doubtful when it comes to how often these fan campaigns directly affect casting decisions, though she is inspired by the conversations that are started through hashtags like #StarringJohnCho, which placed the actor in movie posters to show what it would look like to have Asian male leads.

Keith Chow, the founder of The Nerds of Color, a pop culture fan blog which covers superheroes, sci-fi, fantasy and video games, sees these fan campaigns as a vehicle to talk about representation in the media.

Chow remembers 2010’s #Donald4Spiderman hashtag as one of the first fan campaigns that became a top 10 trending topic on Twitter. The campaign to make African American actor Glover the next Spiderman started when Marc Bernardin, now a film editor for the Los Angeles Times, wrote a post for Gizmodo suggesting that the next Spiderman could be an actor of color without affecting the storyline or character arc.

A commenter suggested Donald Glover, back then most known for his role in Community. The idea caught fire after Glover himself began tweeting the #Donald4Spiderman hashtag to his followers.

Even though he wasn’t cast as Spiderman — the part went to Andrew Garfield — Marvel comic book writer Brian Michael Bendis eventually did create an African American Spiderman named Miles Morales and credited #Donald4Spiderman as one of his inspirations. In 2015, Glover voiced the Miles Morales character on Disney XD’s animated series Ultimate Spider-Man.

And he was recently added to the cast of the reboot, 2017’s Spider-Man: Homecoming, not as the lead but in a role still shrouded in secrecy.

“To me, these campaigns are bigger than a singular character,” says Chow. “The thing about comics, especially, is that their origins go back decades, to a time that was much less progressive. So no matter what, you have to adapt these stories to better fit a modern 2016 context. So why not use this as an opportunity to give minority actors a chance to become stars?”

#Donald4Glover was an inspiration when Chow launched #AAIronFist, a campaign to reimagine the upcoming Netflix adaptation of Iron Fist, a story about a white man navigating a mystical martial arts world, with an Asian American lead. The role eventually went to the Game of Throne’s Finn Jones. But Marvel at least opened up its auditions to see Asian American actors, including Lewis Tan, who ended up cast as villain Zhou Cheng.

So the hashtag campaigns keep coming: #GiveElsaAGirlfriend was started by teen activist Alexis Isabel Moncada about the beloved Frozen princess. #KeepIrisBlack was a campaign to keep The Flash’s love interest Iris, originally written in the comic as white, as African American in the upcoming Warner Brothers film adaptation. Biracial actress Candice Patton was cast in the CW television series of The Flash, which just started its third season. Biracial actress Kiersey Clemons was ultimately cast as Iris in the film, scheduled for a 2018 release.

“Sometimes these campaigns can be misinterpreted as entitled fans bitching,” says Chow, “and then there are always the fanboys who cling to their characters so devoutly and accuse me of destroying their childhoods.”

He laughs at the thought of this.

“It’s more of a plea to the studios to tell them that casting a white dude doesn’t have to be the default. It’s our way of pointing to the success of Star Wars, starring John Boyega and Daisy Ridley, and reminding them that Dwayne ‘The Rock’ Johnson is the biggest movie star in the world right now. So there are other pathways you can go down.”

Which is all useful information for casting director Rapaport.

“I like to know who the fans are interested in,” he says. “I wouldn’t be on social media if I didn’t. It helps the process, and it encourages me to know that people are excited about the shows, that they have ideas and they’re talking about it.”